LEUNE's Desert Gold Disposable is a peachy vape pen with a sweet and smooth vapor quality. The high is usually pretty mild, though it's just strong enough to give you a clear and uplifting buzz. There isn't as much of a body high, but you should enjoy the slight creative boost and pleasant head high. This is a quick and easy way to boost your mood. 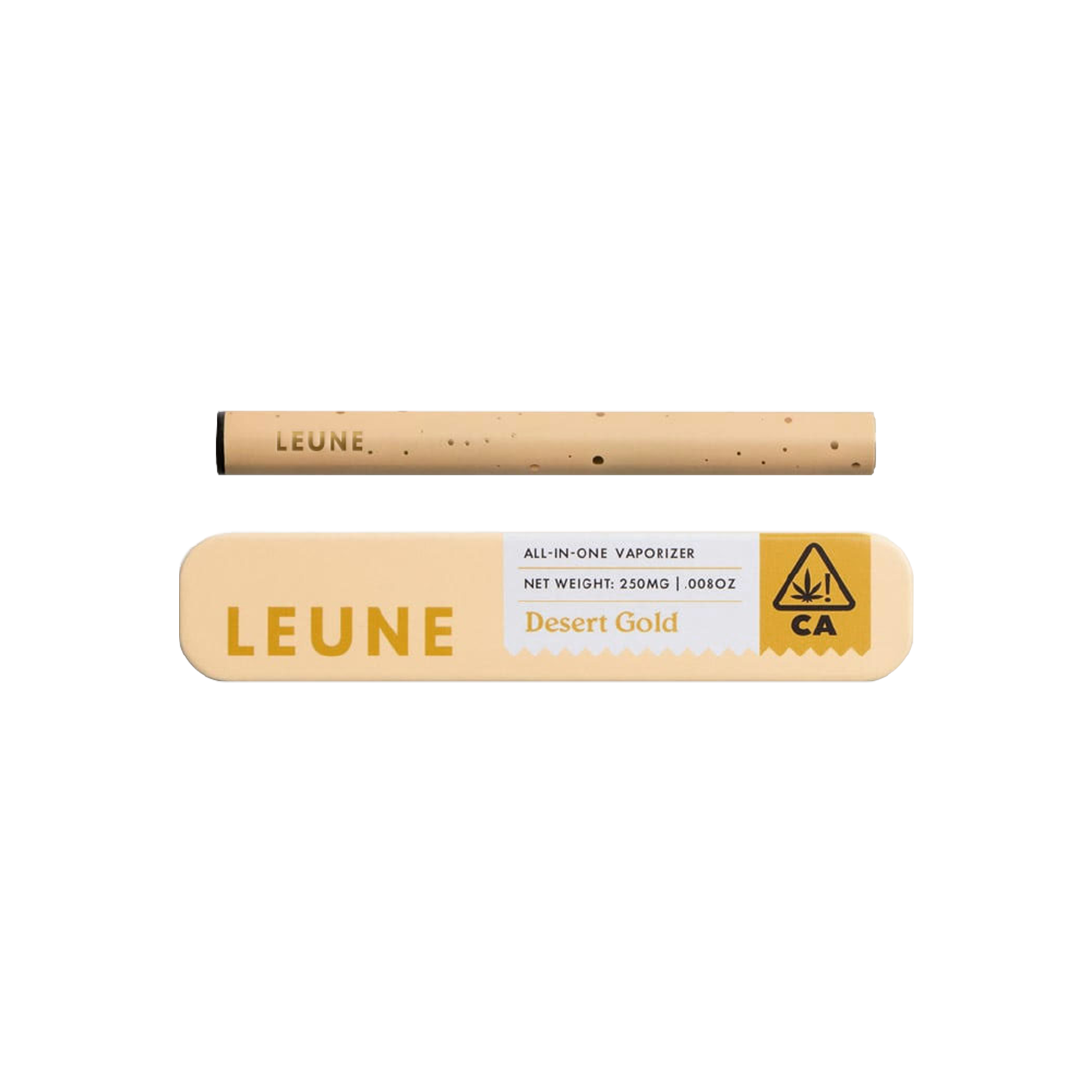 As our committee rates Desert Gold Disposable, we capture their experience in real time through our ratings app and report everything back here.

I was delighted by the light easiness of the vapor and gentle flavor. It managed to be sweet without tasting like a harsh blend of chemicals.

This vape was my wing-woman just when I really needed one.

Some things can never top a classic, no matter how much glitter you put on them. Elton John’s Goodbye Yellow Brick Road tour wanted to be Cher’s last four goodbye concerts rolled into one, but as sequined as his jacket was, there was a disappointing lack of dancers and costume changes. Even though it wasn’t the epic spectacle of grandiosity I was expecting, it was still an amazing show with glowing moments, most of which were made even brighter by LEUNE’s Desert Gold disposable vape pen. And while it doesn’t pack the punch of a classic flower high, this vape is also an immensely enjoyable, shimmery modern substitute.

“As swirls of jabby comebacks swirled around my brain, Desert Gold kept me chill and amused.”

Judging by the name alone, the Desert Gold vape pen seemed like the perfect accessory for the evening. Disposable vapes are, in general, great companions for large events—discreet, simple, and not a huge loss if you lose it. Also, Desert Gold seemed the perfect color to wear to a Yellow Brick Road concert. The taste was light and fruity with a hearty kick, like some kind of old-fashioned Sloe Gin cocktail that’s classy and adult yet still tastes like an orange creamsicle. As someone who usually turns into a coughing mess from most vapes, I was delighted by the light easiness of the vapor and gentle flavor. It managed to be sweet without tasting like a harsh blend of chemicals.

Soon after my date picked me up, I started to realize he seemed more glittery in idea than in practice. But the euphoric lift from this LEUNE pen kept me floating through all of the uncomfortable small talk. It even helped me keep a smile on my face when he asked, “Do you think you’re funnier than me?” I have over a decade of experience writing and performing comedy, but then again, he is a handsome middle-class white man, so I could understand why he had so much confidence. As swirls of jabby comebacks swirled around my brain, Desert Gold kept me chill and amused, helping me edit them all down to just a smiling, “Well, yeah.”

When we got to the venue, the sidewalks were already buzzing with the swirling crowd. While I normally find giant events a bit overwhelming, this gave me just the right balance of focus to make me not anxiously distracted by all the sensory input around me, while also not being so tunnel-visioned that I couldn’t navigate the chaos. While a few drinks could’ve taken the edge off this sort of social overstimulation, booze is ridiculously expensive at the Staples Center. And considering how steep the stairs were leading up to our nosebleed seats, my $30 vape pen was a much safer option, too.

“I kept zeroing in on small details that would normally annoy me but instead felt like amusing vignettes.”

This vape took my mind on an inspired journey, providing the kind of uplift that made me want to write a song of my own. Small details that would normally annoy me instead felt like amusing vignettes, like the one elderly drummer who seemed out of sync and had giant headphones on instead of in-ear monitors. Or the lady walking down a few rows in front of her to tell people not to stand up and dance so that she could sit down and watch humorlessly behind them. Or how Elton seemed to take longer and longer bows after each song, drinking in the affection of the crowd as if he was soaking it up to live off of during his coming retirement, like an attention camel.

As the jukebox hits kept coming, the energy in the stadium grew to a pulsing joy. There was a moment of brilliant lift as half of the stadium sang “hold me closer tiny dancer,” while the other half not-so-slyly sang “Tony Danza.” I was enamored by the flashing lights of cameras that glittered like stars in the large blackness of the stadium. Then there was Elton John. If you closed your eyes, he sounded just like the original recording, his gravely warm voice hitting every note the same. The moment dripped with group-mind nostalgia.

When I went to the bathroom, I quickly made friends, complimenting a woman on her glittery sequined outfit. Even though I was in understated black, Desert Gold gave me enough of my own glitter to hang unselfconsciously. As I snuck a few more drags out on the smoking patio, I found myself making friends with even more strangers and took some pictures for an adorable couple. Even my underwhelming date commented on how bubbly and friendly I was.

He reminded me that when you’re with the right friend, it doesn’t matter who else is around or where you are or what you’re doing; you always find a way to have a good time because of your joyful vibes and inside jokes. I’m talking about the kind of friend that makes anything fun, even a weird, terrifying journey, like that wacky scarecrow did for Dorothy in Oz. For me, on my own sort of Yellow Brick Road, that friend was Desert Gold.

Leune never disappoints. The first experience with this brand was a great one! So great that I decided to give a vape pen a try. Already impressed with the flavor and aroma from this brand made it easy to pick Desert Gold. Notes of sweet citrus an playful peach mingle with my palette. Great for indulging your creative side.