OLD PAL's Purple Punch Cartridge delivers a smooth, herbal vapor and a balanced high. You can expect to feel mellow and relaxed while the body buzz erases the tensions of the day. The Purple Punch strain is a good high for chilling out by yourself or curling up with a blanket, but don't expect any motivated energy. This high was made for hanging out in the hammock or cruising through museums with friends.

Ranked 9 of 319 in Vape Pens for feeling Euphoric. 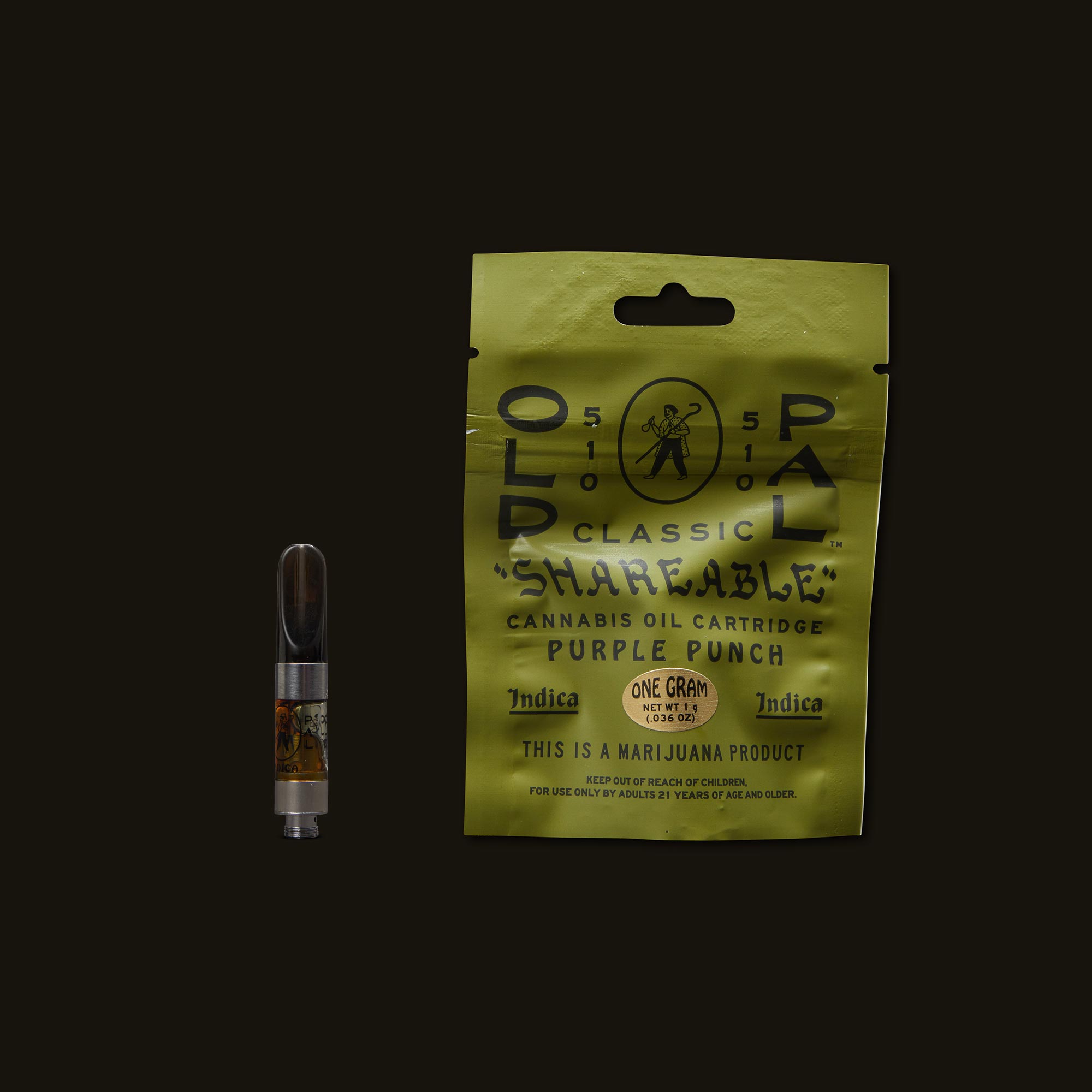 As our committee rates Purple Punch Cartridge - 1g, we capture their experience in real time through our ratings app and report everything back here.

Ranked 9 of 319 in Vape Pens for feeling Euphoric.

Rose-Colored Glasses Have Nothing On This High

Blending past and present seamlessly, this vape is perfect for lighthearted hangs with friends and solo adventures.

Truth be told, I did not know what to think of this OLD PAL strain cartridge at first. Its overtness and brash dedication to grape punch reminded me of my second-grade nemesis turned chum, Arthur Bagwell. While the name suggests a lineage of some nobility or landed gentry, he was anything but. This boy wielded a grape juice box every day for lunch and would spill it on his shirt and cover half his face as he ranted about Hulk Hogan or Transformers. I vowed to shun him lest I be associated. But that didn’t last very long. Despite his messiness, Arthur was handy to have on a dodgeball team and always quick with an off-color joke. His tenacity and ability to spin a yarn wore me down, and I soon surrendered myself to this Whirling Dervish and joined in the fun.

“It didn’t take long for this cartridge to coax the weird out of me.”

OLD PAL’s Purple Punch “shareable” vape cartridge worked on me much in the same way my old pal Arthur did. It was a winding path of a high that played like a whirring microfiche of shared experiences. You could argue that the nostalgic-sounding brand name merely reminded me of my own old pal and thus elicited these strong reactions in me—and perhaps you’d be right. Even so, I applauded its ability to help me tap into these memories and take me down a road long forgotten. What I found objectionable with the initial onslaught of purple punch was a fault of both sense and memory. That both could harmonize as one and work to enhance the taste and experience with every pull is a testament to this oil’s lineage.

It didn’t take long for this cartridge to coax the weird out of me. I began to take on the gait of a Gold Rush prospector ambling into town, raising my OLD PAL vape pen into the dry air and playing the part of the affable friend you haven’t met yet. Like an amalgam of old and new, I was tipping my brimmed hat to passers-by and taking puffs with every “How do you do?” At least in spirit anyway. There may have been a moment where I actually pantomimed such a gesture in the middle of my living room but was suddenly catapulted back to “reality” when my dog began to paw noisily at his bowl. As I fed him, I scratched the back of his head and realized that he too is my old pal.

I’m not about to bore you with the scenarios I conjured up of my two-year-old black Lab and I starring in a buddy cop sitcom called “Paw and the Law” where we partner up to fight crime in an old mining town (only to have our efforts thwarted by a consortium of Mole People). What can be gleaned for all of humanity, however, is that this extract opens the doors to such flights of fancy. This proved true time after time until the cartridge finally relented its last burning vapor. This is an oil suitable for creativity and reflection but not in any mournful or woebegone way. My insights always took on the tone of lighthearted wonderment with a spiked level of curiosity. To experience these effects alone is worthwhile but to share them with others is divine. My experiences rang true in both settings.

“My first solitary session kept me in perfect balance with present-day surroundings and cherished pastimes.”

My first solitary session kept me in perfect balance with present-day surroundings and cherished pastimes. Walking my dog past an old boat sitting on cinder blocks in a neighbor’s driveway would mentally transport me to summers in Cape Cod where my cousins and I would watch the sailboats lazily approach the harbor. A local park bench occupied by a discarded newspaper would take me to the New York City of my youth. It would be so easy to take the autopilot jadedness that I frequently find myself in and flavor this panorama with snide observations and tinges of melancholy, but this high would simply not allow it. In a way, it expected better of me and I could think of no better trait to seek in a pal of any stripe.

It is, of course, one thing to think of old acquaintances fondly and quite another to partake of this vape oil with them in the flesh. I recently took this OLD PAL cartridge out to the Natural History Museum of Los Angeles where we were accompanied by one of my living, breathing friends. We marveled at what we called the “Great Hall of Dino Bones” and wound up at the North American Mammal Diorama where we both honed in on the inscriptions detailing the diets of each particular stuffed animal (molded amidst a pastoral setting, of course). For instance: “A Ring-Tailed Lemur eats: Leaves, Fruit, Flowers, Tree Bark, Sap.” Under the guidance of OLD PAL, I suggested to my actual pal that we come back with a Sharpie and add waffles to each dietary list.

We laughed well past the gift shop and back around to the ghastly sarcophagus of something called a Megamouth Shark. There, we created more worthwhile memories that we could surely pine for later when some other OLD PAL blend comes along to help seamlessly connect the past to the present.

Truly one of the best cartridges out there, and not just because of the price point. So much bang for your buck. I absolutely always have this stocked, it’s my go-to for a fun, relaxed, silly chill.