Sonder's Blue Dream Cartridge has a sweet grapefruit flavor in its silky smooth vapor. It tends to produce a potent and uplifting head high with a strong body buzz following not too far behind. This is an ideal lazy day high. It pairs beautifully with a heavy blanket on the couch. Use this to keep aches at bay while you soak in a hot bath or float around the house.

Ranked 58 of 319 in Vape Pens for feeling Euphoric. 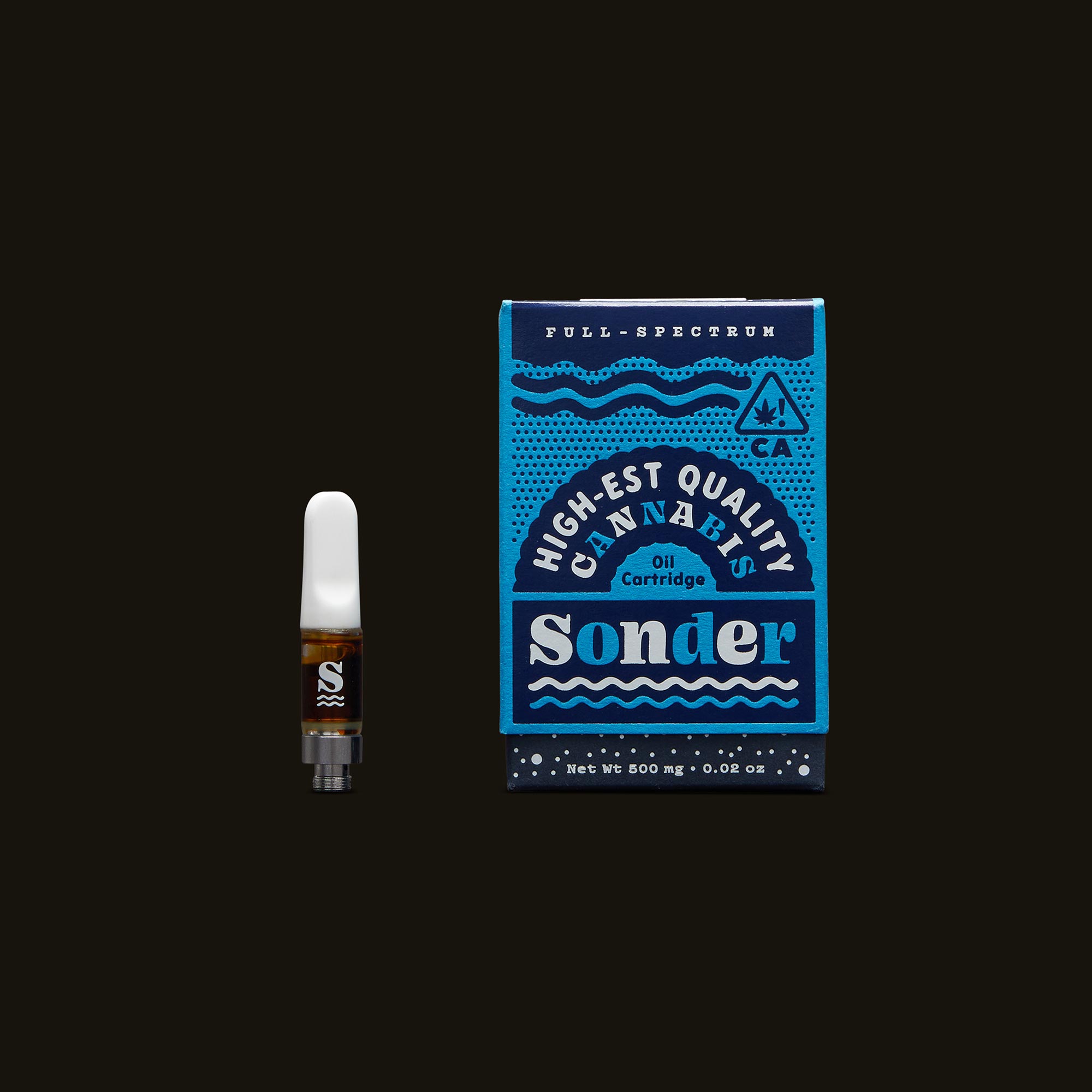 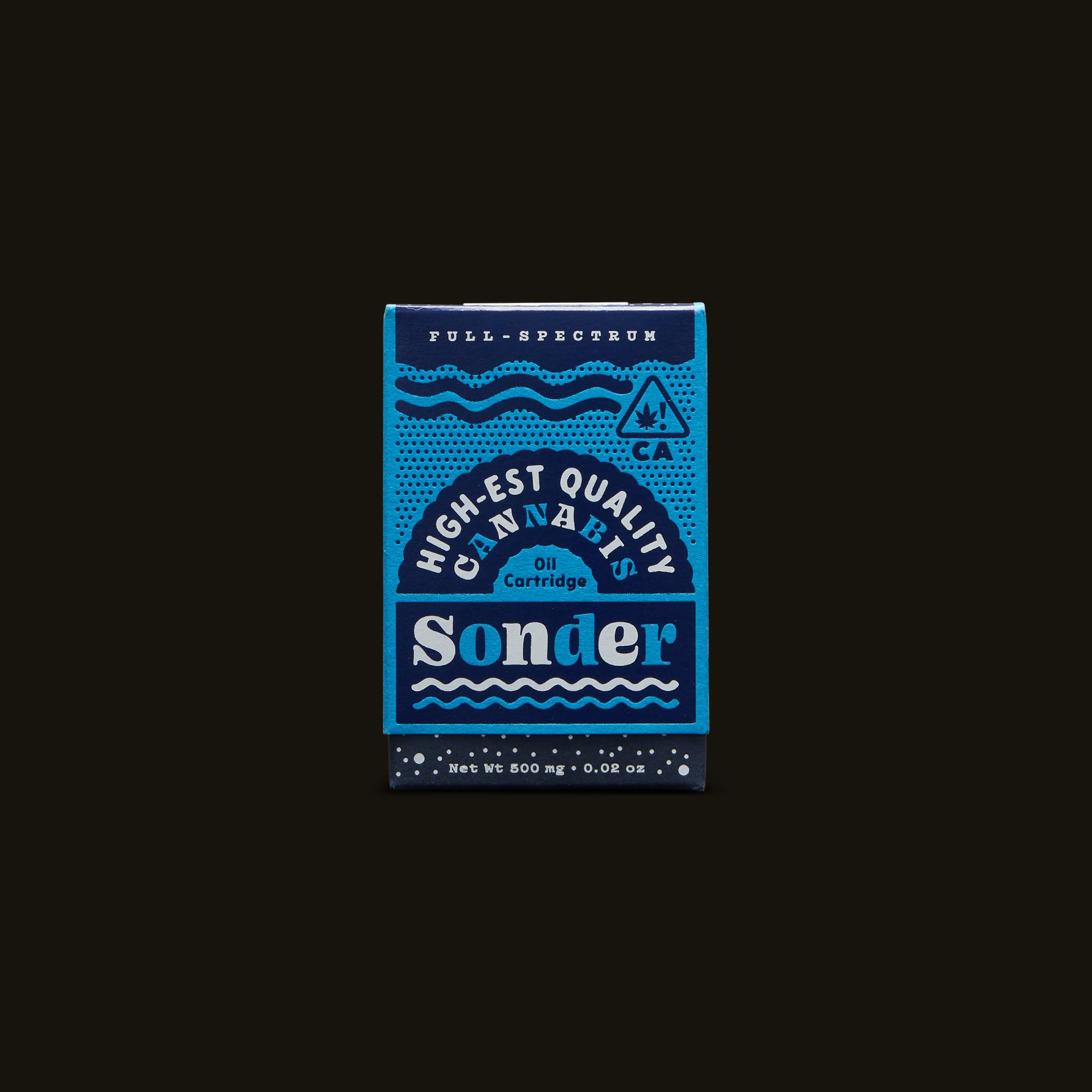 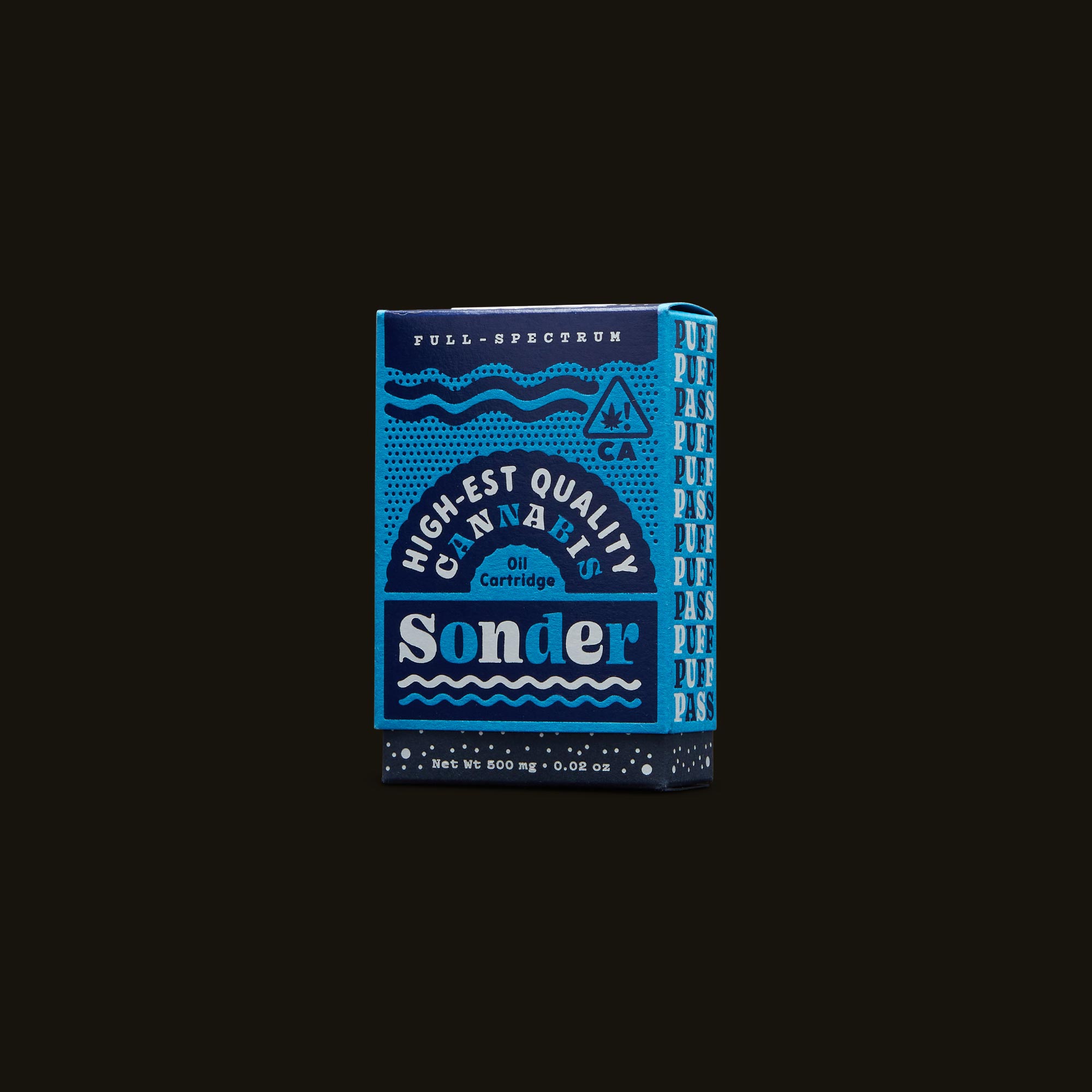 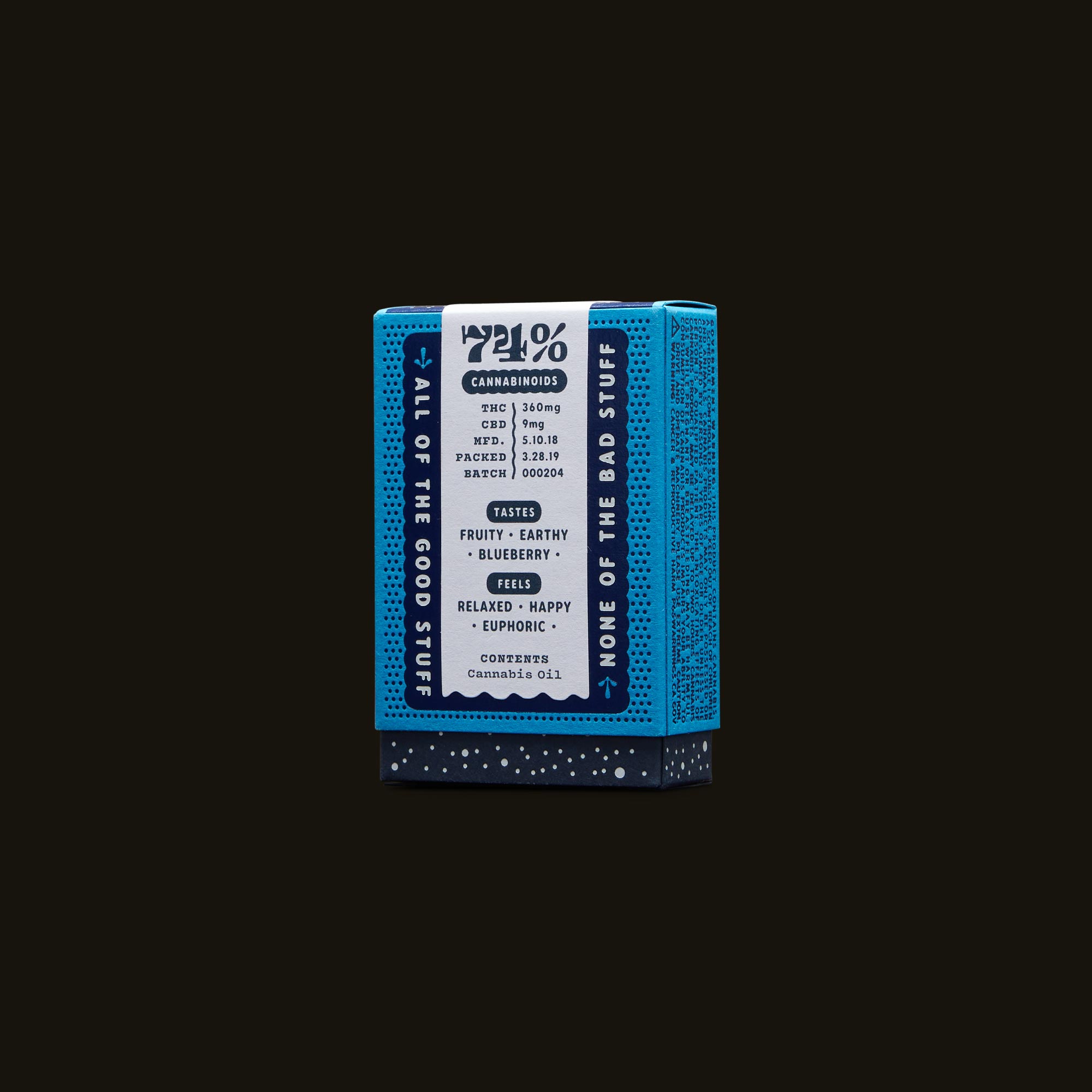 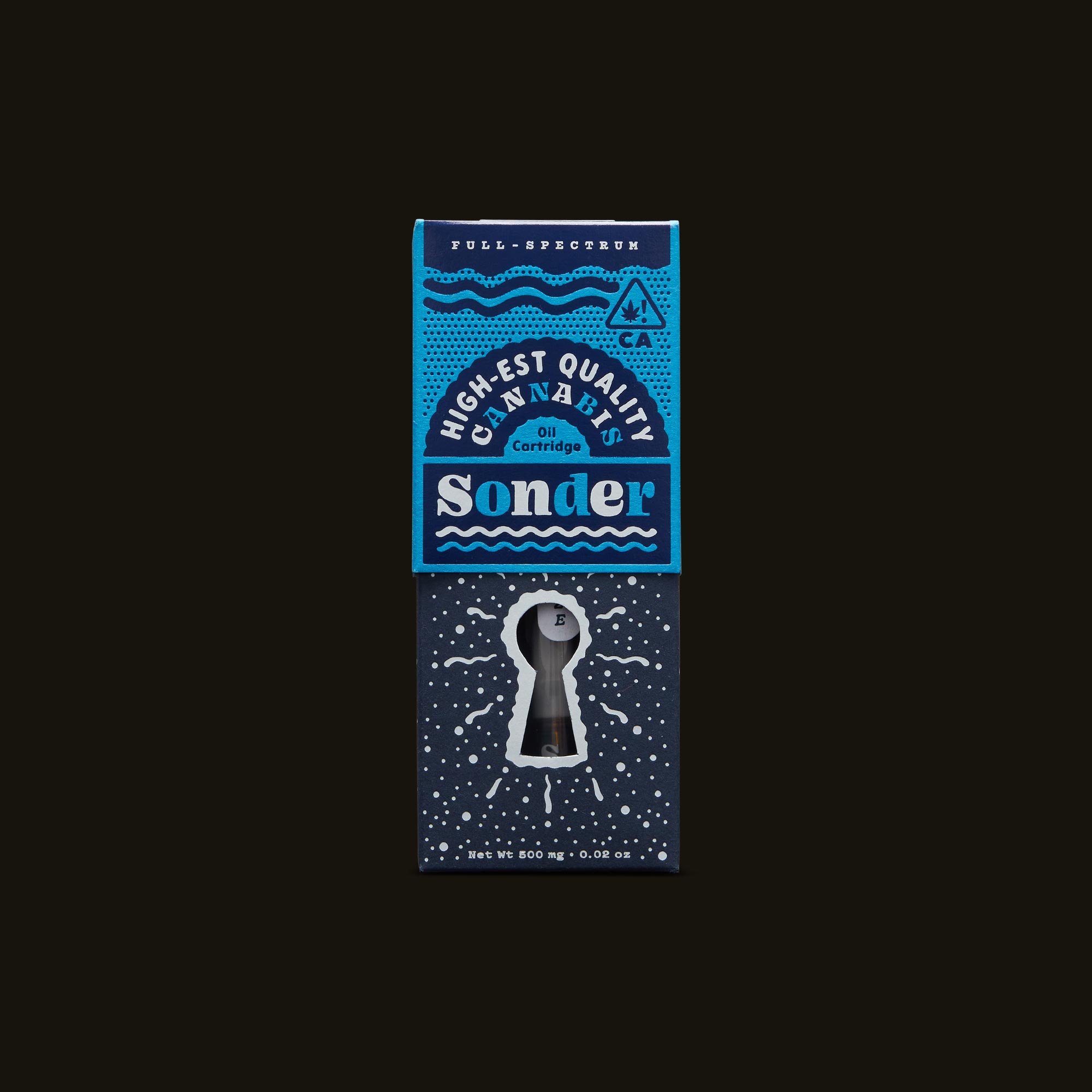 As our committee rates Blue Dream Cartridge, we capture their experience in real time through our ratings app and report everything back here.

Ranked 58 of 319 in Vape Pens for feeling Euphoric.

A Blue Dream Cartridge True To Its Dreamy Name

This dreamlike high turned the mall into a real adventure.

IN REVIEW: Sonder managed to distill all the best attributes of the Blue Dream strain in this Blue Dream cartridge. As reviewer Luca attests, it delivers a perfect, dreamlike high that can add an element of whimsy and curiosity to even the most mundane daily activities (like waiting in line at the post office). Start with a few hits, embark on virtually any activity, and see where this high takes you.

When Carl Jung spoke of dreams as the bridge between the unconscious and the conscious mind, he may as well have been speaking about my local post office where a line can stretch across the county line with no chance of being spared an early reprieve from the darkness that is shipping one lonely box in the midst of thousands. This is where I found myself on a hot and sunny morning in the San Fernando Valley. This is also where I cleverly fortified myself for the adventure by vaping Sonder’s Blue Dream cartridge.

“It was a situation that called for laughter as much as it called for a furnace of buried rage.”

I mention Carl Jung because my conscious mind was telling me I could just walk to Kansas City, hand-deliver the package myself, and get back home before the line moved indoors. My unconscious mind however, propelled by a generous Blue Dream vaping session, was telling me to melt into the moment and befriend the very things that tend to aggravate me. That notion is what sparked my first moment of unexpected joy.

It was further piqued by watching an elderly man inspect sheets of commemorative stamps by holding them up to the light and towards his eyeglasses as if he were appraising the Magna Carta itself. All while half the population of Southern California waited behind him to send off their boxes of beef jerky, golf trophies, or whatever else people send by U.S. Mail. It was a situation that called for laughter as much as it called for a furnace of buried rage. The Blue Dream reliably pointed me toward the former, always letting me see the hilarious spin on typical “hassles” of daily life.

This Blue Dream cartridge reminded me that getting high is a lifestyle in the sense it can help me simply opt out of aggravations and hang-ups. That said, the quest to calm my mind is also at the peril of losing my train of thought with this strain. I always prefer a more engaged experience with my cannabis, and there were times where I could get latched onto a thought that would send me down neverending mazes of potential scenarios and far-fetched predicaments that could have easily devolved into a lazy river of neurosis. That said, if you are the type of smoker who enjoys getting on that thought wave and checking out for a bit, Blue Dream is a worthy ride. It felt like a mental autopilot that could take you in many directions, depending on your whims.

“As a sativa-dominant hybrid, Blue Dream would work well for most physical activities.”

The rewards of this high start when you can catch yourself in those moments before you drift away. Blue Dream demanded a lot of me here as my mind tends to wander more than most nomadic tribes. Those few instances where I managed to stay with a thought or an image and appreciate it for what it is became the most poignant moments of the experience.

Soon enough, the heavens took pity on me and more postal workers started to arrive. Empty windows were manned and the line picked up. Before long, I was done mailing what I had to mail and I left as calmly as if I were strolling through the mall. I mention this because that is exactly where I went after the Post Office. I wanted to purchase some earbuds because I lost mine but also because I really wanted a Wetzel Pretzel. Walking down the mall esplanade holding a buttery piece of twisted bread while high on Blue Dream is a fine way to spend a sliver of your day. Sure, you could worry about all the things you need to get done, but Blue Dream has a way of shushing your inner monologue, saying, “I’d really rather not at this time.”

I did encounter one sticky situation. I paused long enough in front of the Sony store’s display of flat-screens that I began to sway ever so slightly. I just lost myself in one of the 80-inch Bravia TVs that shouted my name. I was awoken from my fugue state only because a salesman materialized and asked if I needed any help. I didn’t like the way he was looking at my pretzel so I just left. I was so impressed with the TV’s picture quality that I wanted to recalibrate my own and so I walked behind the Dick’s Sporting Goods and snuck one last pull to bask in its berry-flavored goodness. It had a layered taste that complimented the notes of coarse salt still left behind by the Wetzel.

“For combat sports, where timing and technique are paramount, I found this strain invaluable.”

As I glided towards my next destination, I basked in the perfume trail left behind by those cosmetologist snipers who try to peddle their scents on you. Luckily I kept my bearings and eventually found the Apple store. I made my purchase while only managing to ogle one gadget. Fun fact: Did you know Apple sells jump ropes??

Towards the evening, I enjoyed another session with Sonder’s Blue Dream oil and felt like taking it for a test spin at my Brazilian Jiu Jitsu class. As a sativa-dominant hybrid, Blue Dream would work well for most physical activities. For combat sports, where timing and technique are paramount, I found this strain invaluable. It helped me get into that “flow roll” state and explore different moves while really relying on muscle memory to heighten the workout.

Ultimately, this is a multi-faceted strain that earns its praise by not pigeon-holing itself into any one category. Like a good tour guide, it just heads in the direction you want and gives you tips on how to enjoy the roadside attractions. Sonder’s Blue Dream cartridge can act like a fleeting window into your—dare I say it?—dreams themselves. In this respect, it can be a powerful and introspective high as much as a joyful one.

Be the first to review Blue Dream Cartridge from Sonder and help others find their high.