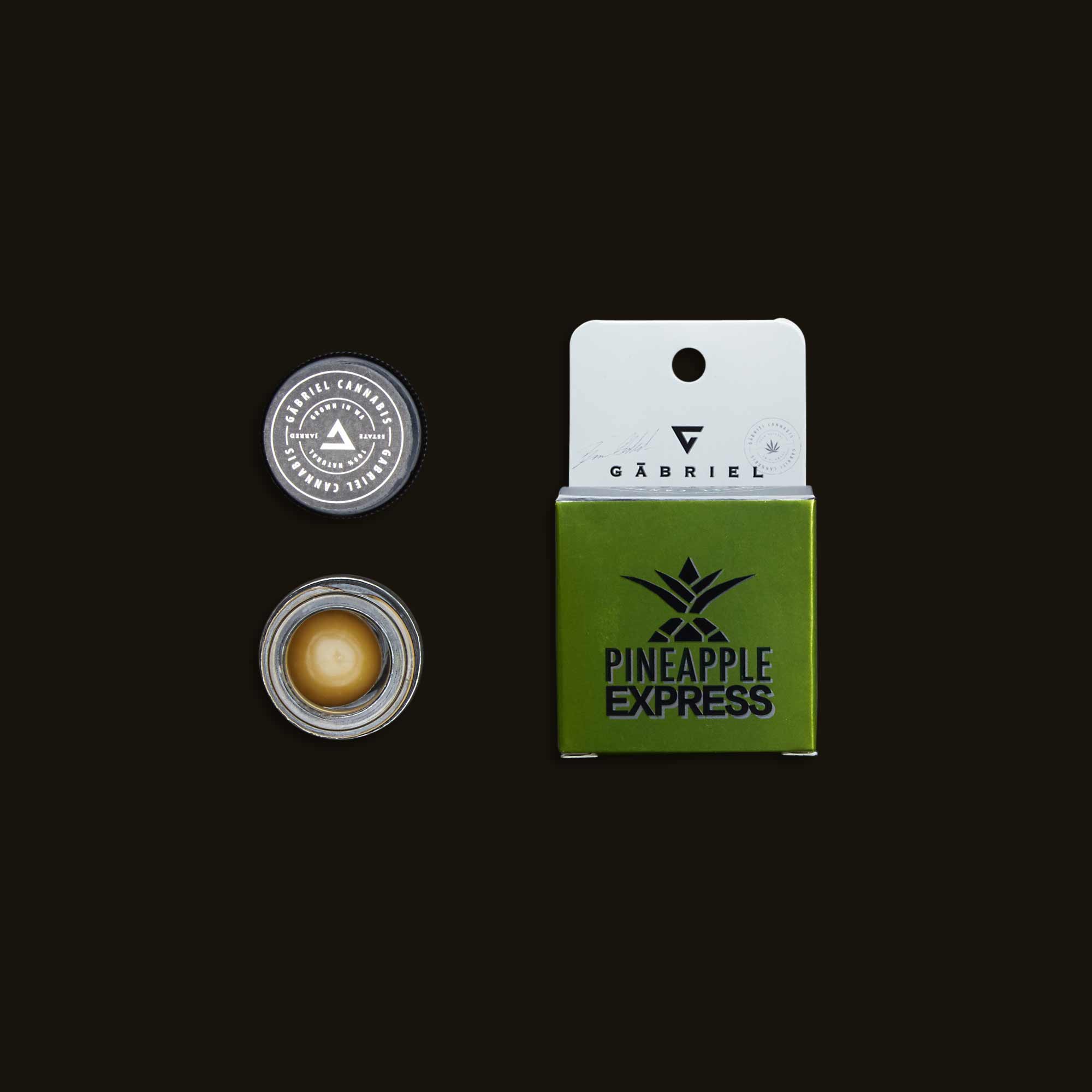 Gabriel Cannabis' Pineapple Express Rosin can really provoke the munchies, but this pine-flavored concentrate typically provides an energetic body high that cruises you through your day. You can expect to feel uplifted and motivated to perform menial tasks, especially if they result in food. Dab some of this before making a big dinner and enjoy.

Ranked 68 of 107 in Concentrates for feeling Euphoric.

Mood Boost
Socializing
Getting Outside

As our committee rates Pineapple Express Rosin, we capture their experience in real time through our ratings app and report everything back here.

Ranked 68 of 107 in Concentrates for feeling Euphoric.

Don't judge a book by its cover.

Rosin is one of the oldest forms of cannabis concentrate. Still, the pressed-from-fresh-flower wax has never seen the popularity of its extract and hash counterparts. Maybe it's because we live in a time when every moment must be deemed Instagram-worthy and rosin is not as sexy or photogenic as diamond-laden, terpene-steeped sauces or nearly clear shatter. Simple yet highly potent, rosin is much stronger than traditional flower and more concentrated but still not as high in THC as some of today’s scientifically driven concentrate options. The novelty of rosin is that it's on most menus as connoisseur-grade, not something for everyday consumption. In fact, rosin is best experienced as a low-to-mid-temp dab. But don’t be too quick to sleep on this most basic form of concentrate, as the oil pressed directly from flower is still intensely bold and flavorful.

Rosin presents a classic case of “don’t judge a book by its cover.” She’s no beauty queen and bares a close resemblance to something your dog might have left in the yard. That said, do not let looks keep you from leaning in and taking a whiff. The aromatics of rosin typically skew a touch more earthy than most other concentrates. Shatter, for example, is biting and it stings the senses. Rosin’s terpene profile is generally more concentrated than flower, but it's just as robust. Gabriel Cannabis’s Pineapple Express rosin is no exception.

The initial aroma of the sample I got was sweet and earthy. The taste of the inhale carried a hoppy, piney flavor that let me know the strain was well-balanced. In my humble opinion, sampling rosin should be enjoyed similarly to craft beer tasting. You want to really notice the complex flavors and savor each batch's nuances. Because it isn’t really practical to produce rosin at a large scale, most rosin out there is produced using artisanal techniques in small batches. So really let your nose be your guide here.

I tend to believe rosin is for the headier consumer who seeks an earnest high and appreciates the earthiness and grit provided by the raw plant. If you prefer Stone IPA to Budweiser, then Gabriel's rosin could be the product for you. The residual plant matter (albeit in minuscule amounts) lends nicely to a more full-bodied taste and smokey mouthfeel. Pineapple Express Rosin is touted as a creativity booster, energy activator, and deliverer of an uplifting, euphoric high. This claim holds up with the Pineapple Express I tried, but I encourage you to be cautious of all of the most traditionally bothersome side effects that come along with consuming cannabis: dry mouth, dry eyes, and of course, the munchies.

“Overall, what Gabriel’s rosin lacks in bag appeal, it more than makes up for in potency.”

Gabriel’s Pineapple Express rosin definitely ranks above average in this unique category of cannabis products. That said, it is somewhat difficult to make any overarching or definitive claims as to which brand is truly the best, since batch-specific uniqueness is inherent to just about all rosin products. The profile and stability of the yield is dependent on the quality, terpene profile, cannabinoid content, and health of the flower it was pressed from, which can differ slightly from harvest to harvest. With that said, I have consumed a good amount of Gabriel’s Pineapple Express flower, and am consistently  impressed with the quality. As of now, however, Washington doesn’t have a ton of rosin on the market. The product category that tows the line between hash and wax seems to only meet the demand of a niche consumer base and is more popular in Oregon than Washington.

The second-most standout feature was how much more amazing it smelled than looked. Pineapple Express flower already has such a distinct scent, and having it all condensed down into a little glob of dabbable, pressed rosin only made the sharp scent all the more pungent. I will say, though, that the number-one takeaway from my Pineapple Express rosin experience was how hungry I felt after smoking the solventless concentrate. The thing is I wasn’t craving junk food and didn’t necessarily have the munchies in the traditional sense. Instead, I experienced a seemingly uncontrollable urge to get creative in the kitchen. On two separate occasions I made dinner for all six of my housemates after smoking this rosin.

Overall, what Gabriel’s rosin lacks in bag appeal it more than makes up for in potency, and the fresh-pressed concentrate delivers a pleasant high. This is probably not a good product for a beginner cannabis user, since its THC level is fairly high. However, if you’re normally a flower consumer, then you may notice a smoother smoke with an even tastier experience. Pineapple Express Rosin is most likely not going to be your daily go-to, but it is a good time and a solid summer afternoon choice.