Défoncé's Coffee Chocolate Bar swirls in flavors of chocolate and cannabis with a cup of joe. They even throw some cookies in there. You'll probably feel some munchies and dry eyes, but an energizing buzz should settle in and wash those away. The motivating wave of creativity is great for your musical endeavors and sketching ideas, but you don't want to eat this anywhere close to bedtime.

Ranked 79 of 321 in Edibles for feeling Euphoric. 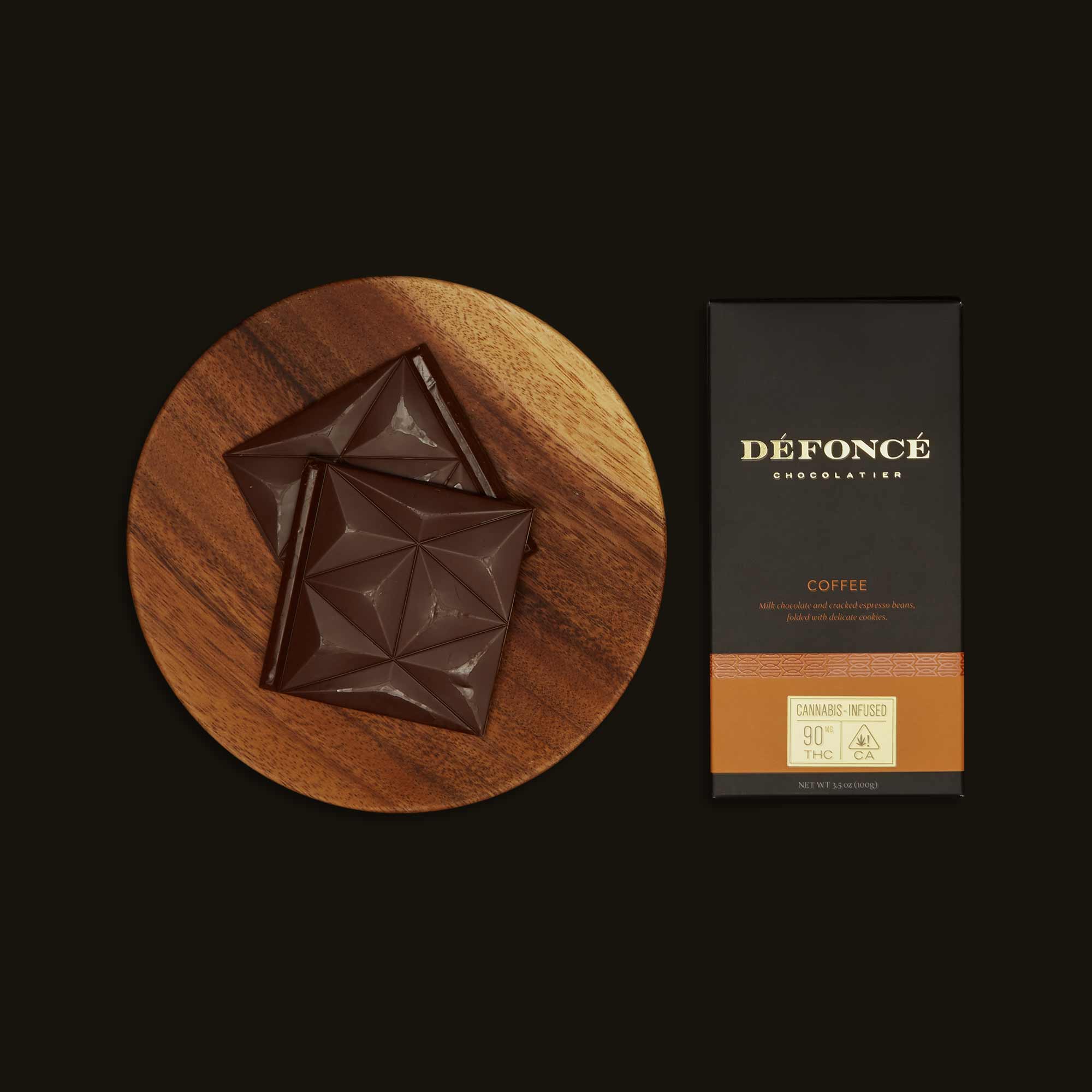 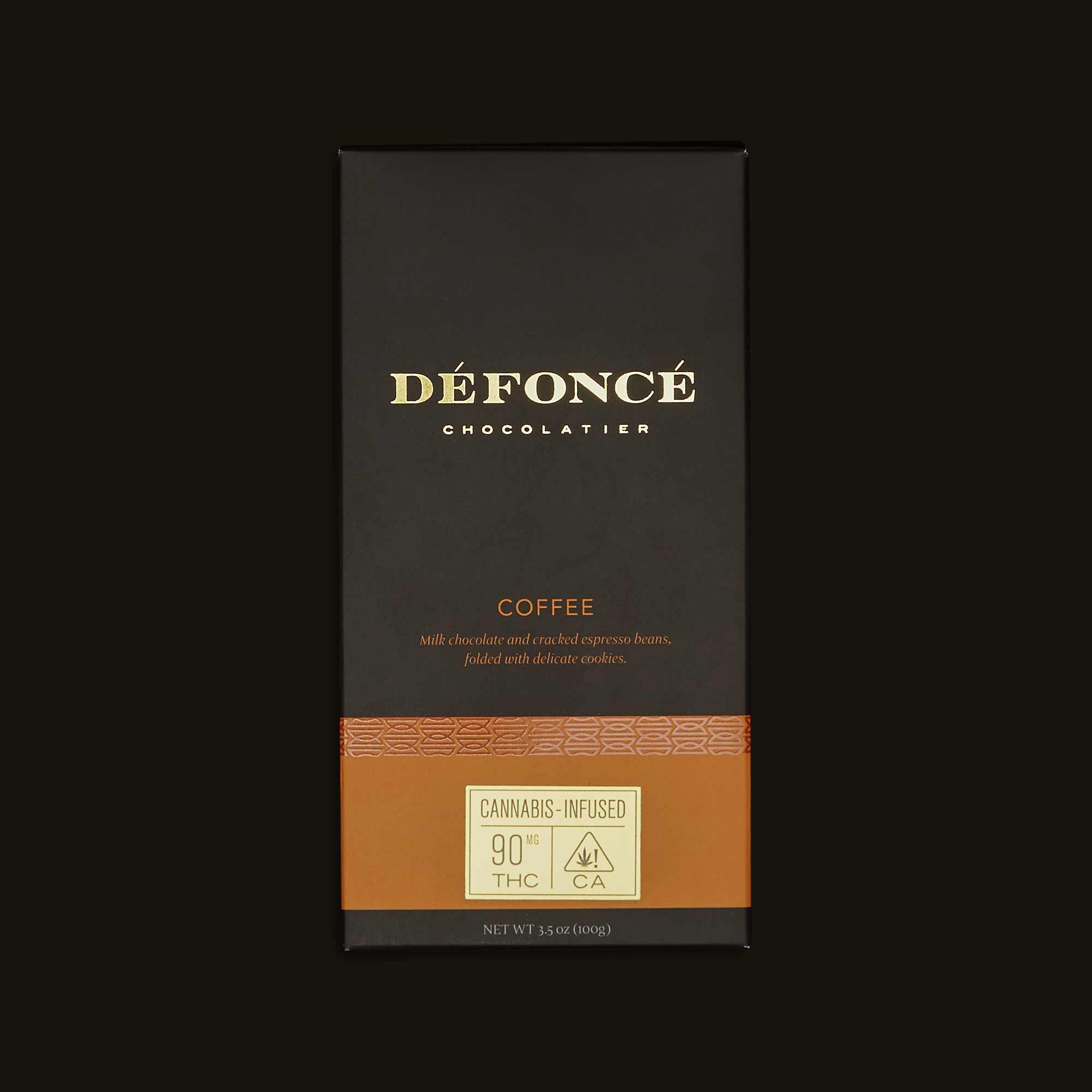 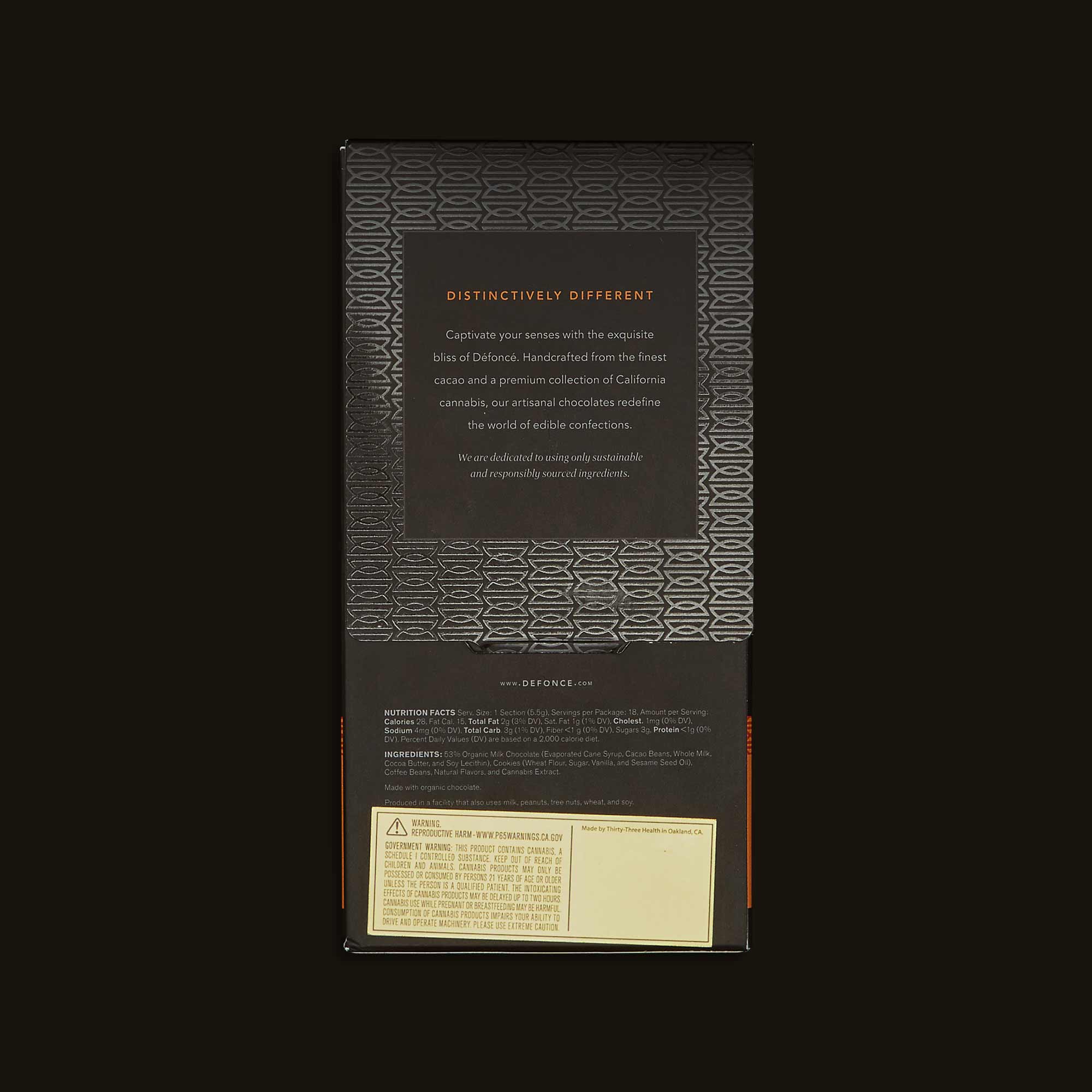 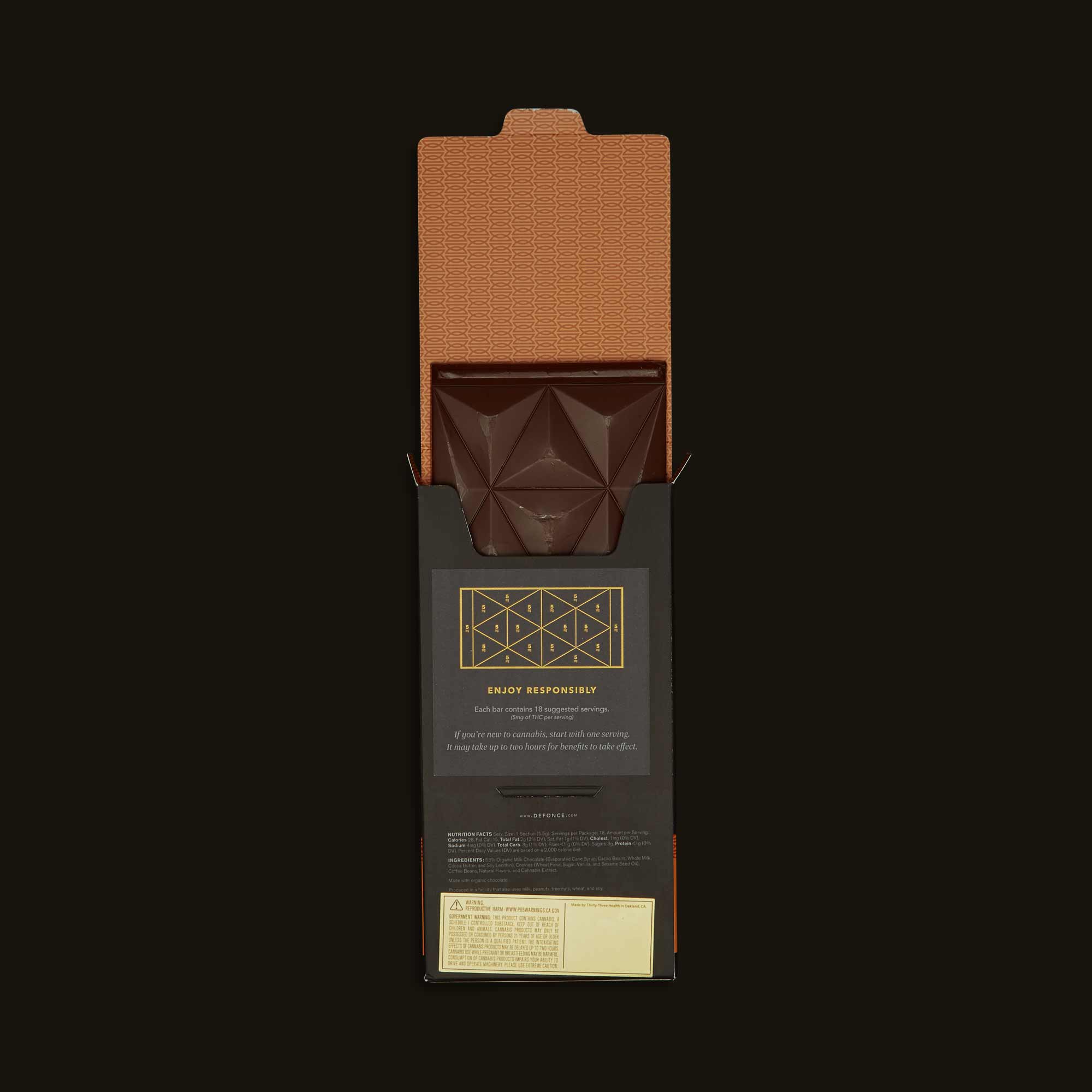 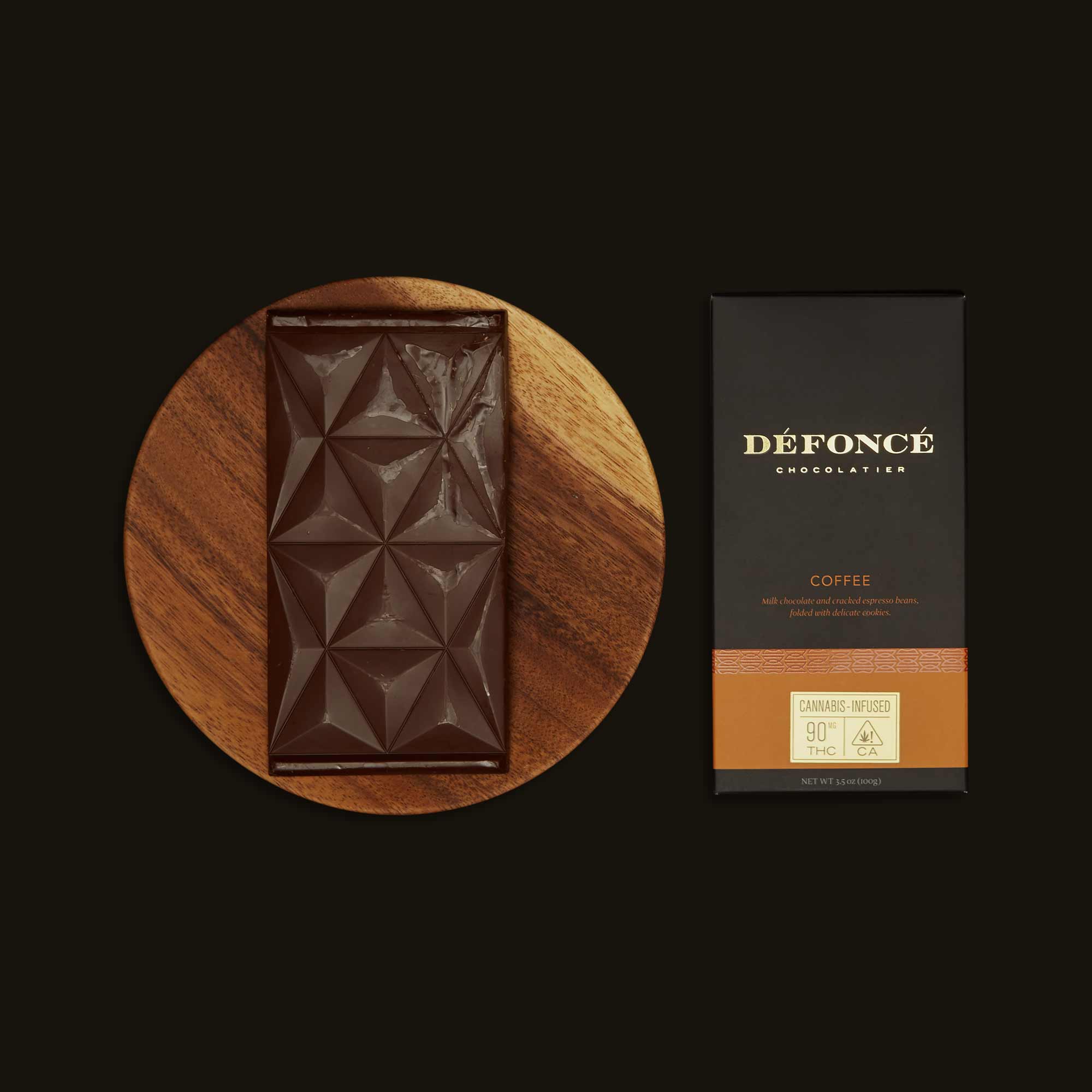 As our committee rates Coffee Chocolate Bar, we capture their experience in real time through our ratings app and report everything back here.

Ranked 79 of 321 in Edibles for feeling Euphoric.

A Weed Chocolate To Bring Out Your Italian Side

On my Italian side, it’s common to cap off a carb-heavy family feast with “some high-test” (an espresso nightcap) before the drive home.

Over the course of my cannabis-ingesting career, I’ve experienced three possible outcomes when it comes to consuming edibles: Some make you feel like that friend of a friend of a friend has ripped you off, some get you impossibly high, and some manage to hit the sweet spot—but only through a stroke of luck. If edibles are your friends, they’ve historically been unreliable ones, likely to get on your nerves and refuse to take a hint when you want to be left alone. Or they stand you up altogether.

But edibles have come a long way in the past decade. More often than not, it’s now almost expected that you’re ingesting the “just right” edible. The kind that makes you feel like you’ve stepped into a children’s book, wonderment and whimsy included. And it doesn’t feel like a stroke of luck but rather the result of due diligence from lab testers and artisan chefs. Long gone are the nightmare days of chewing and swallowing through dry brownies that taste like 5% chocolate and 95% untrimmed stems. With the cannabis move into the mainstream, no marijuana grocery aisle has received a better stock upgrade than edibles.

These days, I’m partial to the ones broken up into micro-doses, usually around 2.5mg to 5mg pieces. More pieces in smaller doses puts you in the driver’s seat. After bong-ripping my way through one college semester after another, I’ve graduated from the philosophy that the goal is to get as high as you possibly can just to see if you can keep your cool. To know your ideal dose is to truly know yourself.

Défoncé’s Coffee Chocolate is divided into 5mg triangles, each fitting comfortably in the palm of your hand. Apart from being cut into triangles instead of squares, they’re not aiming to reinvent the wheel or anything. That said, the strong, delectable coffee scent will definitely pique any coffee-lover’s interest. It did mine. After dinner on a typical weekday night, I treated myself to a 5mg triangle. It tasted exquisite and expensive and the nutty aftertaste made me want another helping. Had I not preceded the edible with reheated spaghetti and chicken parmesan à la Tupperware, I’d have felt like I was tasting dessert delicacies at an Italian restaurant. On my Italian side, it’s common to cap off a carb-heavy family feast with “some high-test” (an espresso nightcap) before the drive home. The chocolate, with its distinct coffee profile, made me feel right at home. They also pack a pleasant nutty almond crunch that wouldn’t have been discernible just by looking at them.

I had played a few hours of pickup basketball and had been dealing with a number of nagging twists, sprains, and jams. So I was hopeful that I’d get a dose of pain relief with my high. The effects began to take shape after only 30 minutes. Because of the coffee profile, I expected to get a second wind to make some headway on some of my writing projects. But I started to feel a bit heavy and maybe even the slightest bit drowsy.

“Everything sounded excellent and dynamic.”

Writing was the goal, but my general fatigue mixed with a relaxing and euphoric high made it very easy to cave and trade in writing for listening to music. Everything sounded excellent and dynamic. An hour in, the drowsiness dissipated and I felt appropriately high. Though, to be honest, I was a bit disappointed given the expectation I had from the strong coffee profile. It was clear that this wasn’t “high-test.” It was decaf, for those who love the flavor enough to drink an evening cup but are sensitive to caffeine and want to ensure their eight hours.

After moving on from writing and music, I parked on the couch to watch Miami Blues, a 1990 thriller starring a young Alec Baldwin. I was surprisingly engrossed in the story, easily able to track the straightforward plot. I also felt nice and loose. Focusing on the task at hand isn’t an issue with this Défoncé product, but you will be tempted every 30 minutes or so to extend that focus toward something else. Like a new album or that article you bookmarked or that line of dialogue that immediately deserves a home. It’s possible that you’ll have no problem focusing through a study session or remembering the finer plot points after a night of binge-watching, but my attention span has its limits.

Three hours after eating a 5mg triangle, I felt only the faintest remnants of my high. I think the Défoncé Coffee Chocolate Bars provide an even, balanced high perfect for post-workout lounging, self-reflection, movies, music, writing, meme scrolling, and other highbrow pursuits. There were a few brief stints of energy and cerebral creativity, but they weren’t especially long-lived. And aside from slightly dry eyes and heavy lids, I didn’t experience any noticeable side effects.

Given the coffee flavor, which I often associate with buzzy sativa edibles that add a pep to your step, these Défoncé chocolates definitely seemed to be akin to a cup of decaf. They offer a great taste that might even lead you to a second serving, but they certainly won’t interfere with a good night’s rest. And unlike coffee, these edibles also possess the power to relieve soreness and pain, in part just by making you too relaxed and euphoric to give them any thought. Défoncé’s Coffee Chocolate Bars will cure your Miami blues, as well as your Tallahassee aches and your Jacksonville pains. The same can’t necessarily be said for your Tampa Bay writer’s block or your love of Orlando dad jokes.

Be the first to review Coffee Chocolate Bar from Défoncé and help others find their high.