District Edibles' Sativa Cherry Cola Gummies are dense and chewy with a bizarre flavor of plastic and berry candy. The uplifting high is typically balanced and clearheaded, making this a great option for outdoor barbeques and social parties (in the presence of comfortable company). The head high is eager and happy, so if you're feeling more reclusive you can use it to get creative with your work.

Ranked 229 of 285 in Edibles for feeling Euphoric. 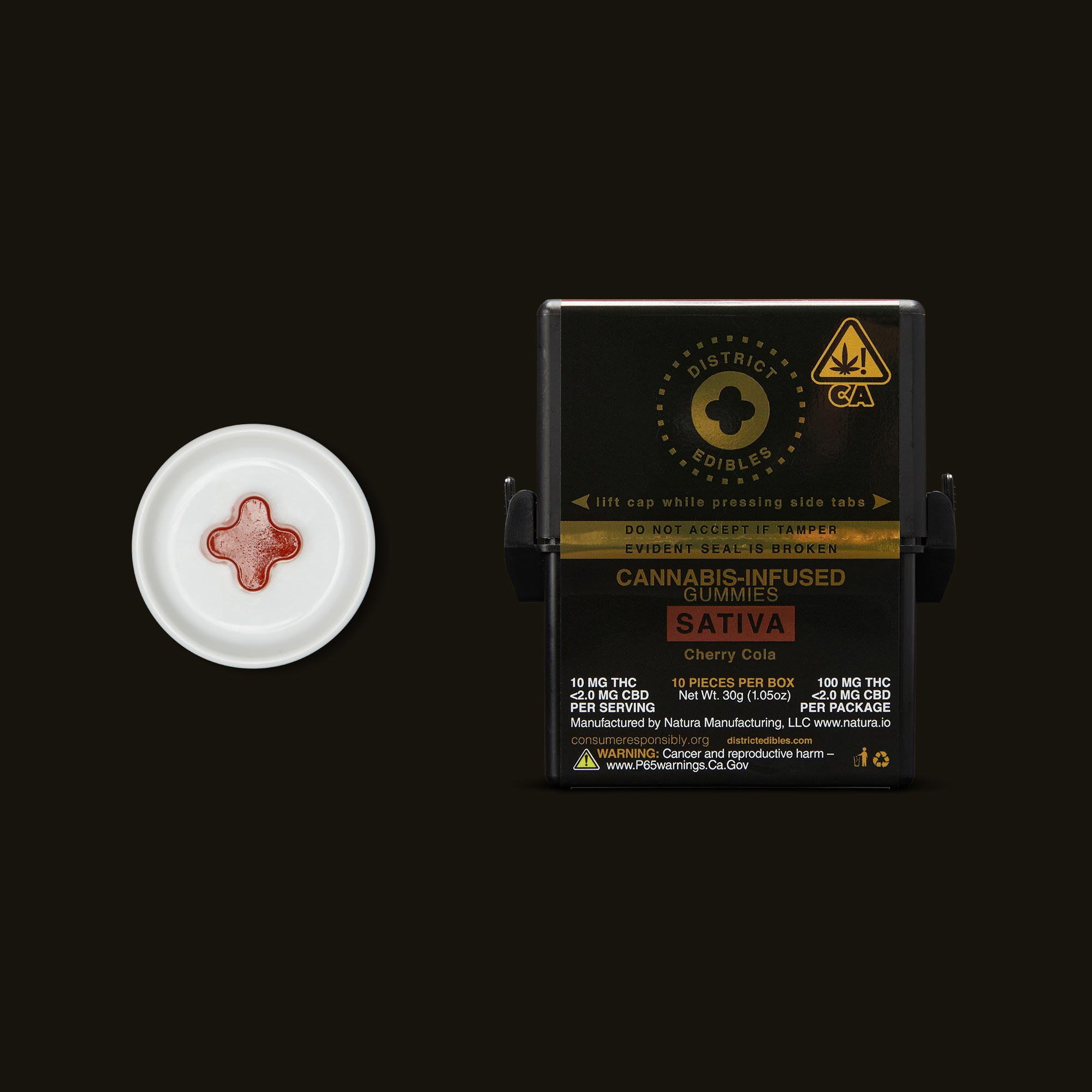 As our committee rates Sativa Cherry Cola Gummies, we capture their experience in real time through our ratings app and report everything back here.

Ranked 229 of 285 in Edibles for feeling Euphoric.

Party Candy Is For Parties

Don't try to force this edible into being an antidepressant when it just wants to party.

I never thought of gummies as being “tricky” until I tried District Edibles’ Sativa Cherry Cola variety. From the mouthfeel to the flavor to the emotional responsiveness, this product was the cannabis equivalent of a “what you ordered vs. what you received” meme, but instead of an editorial couture gown vs. a tissue paper and lace disaster, it’s two of the same gummy with two wildly disparate cerebral responses.

But I’m getting ahead of myself. The mouthfeel was typical, semi-firm, glossy, chewy, and dense enough to stick between my teeth. The flavor, however, was atypical. It was reminiscent of a dentist’s gloved hand smeared with a berry-flavored varnish, leaving vapor trails of latex and bubblegum to settle on the top of my tongue and the back of my palate. I don't have fetish-y feelings about latex, but if I did, this candy would probably have given me a boner.

“I don't have fetish-y feelings about latex, but if I did, this candy would probably have given me a boner.”

Day one of testing was spent in a particularly fantastic mood. After a week of family-related crisis travel, I was finally taking a well deserved day to myself, away from bedpan shenanigans and lengthy medical consultations. I had planned a day of spending my money like money ain't shit, shopping the impossibly crowded corridors of LA’s fashion district. Now, I’m aware that the feverish bustle of downtown Los Angeles (or any other buckwild metropolis) is maybe a stoner nightmare for some, but for me it’s a stoner fever-dream.

The 10mg of THC crept into my purview as (with my sister driving) we hit the freeway off-ramp, blooming like a beautifully stupid flower by the time we hit DTLA. My dopiness was at full power as we tried to secure parking (“park there, wait, no park there, no wait park there, no wait…”). Once we secured our whip and began our shopping adventure, I was in true edible heaven, bouncing jovially from stall to stall, deftly haggling over prices, and screaming in delight over endless bolts of wholesale fabric. The dim-bulb onset had brightened into a full-spectrum high, lighting up all my cognitive pleasure points and creating a cushiony body high for support.

The day one lesson was that one 10mg serving of this gummy was the perfect complement to an already perfect day, spent in perfect comfort with perfect companions. I set myself up for a best day ever, and this bright sativa gummy could not have delivered a more reciprocal high.

Now let's discuss day two. The medicinal mouthfeel was not as charming as it had been on day one. The chewy bits sticking behind my molars was exasperating, and there was no satisfaction in flossing them out, re-chewing them, then flossing them out again, then re-chewing them again. On day one, I planned my day. On day two, my day was planned for me and I was just not feeling the vibe. The dopey onset never graduated to a radiant prism, so everything I said over the course of a planned family lunch sounded (to me at least) like maybe, the dumbest shit that ever came out of my mouth.

But what's worse is how deeply into my head it drove me. I obsessed for the rest of the day over how much I felt like a bumbling fool. The truth of my situation was that no one thought I was a big dumb asshole. I just hadn't arranged my day correctly and I was taking it out on myself internally.

“I got the message these were not therapeutic candies, but party enhancers.”

When I finally found time to be alone, it was incredibly difficult to concentrate. The zippy sativa had me nearly crawling out of my skin. So, day two was a definitely a bummer, but it was made infinitely worse by my tendency toward self-annihilating depreciation. These were not the edibles to turn around a melancholy afternoon. As it turned out, planning was everything with these. When I was putting on a social performance on day two, I was a big dumb lump. When I was authentically enjoying my company on day one, I was living my best life.

Ultimately and reluctantly I got the message these were not therapeutic candies, but party enhancers. So, I suppose the bottom line is this: Don’t order a $20 knockoff eBay prom dress thinking you’re really getting a Vera Wang ball gown and don’t go ordering party candy thinking it’s going to lift your midweek malaise. EBay is for weird crap and party candy is for parties.

Be the first to review Sativa Cherry Cola Gummies from District Edibles and help others find their high.