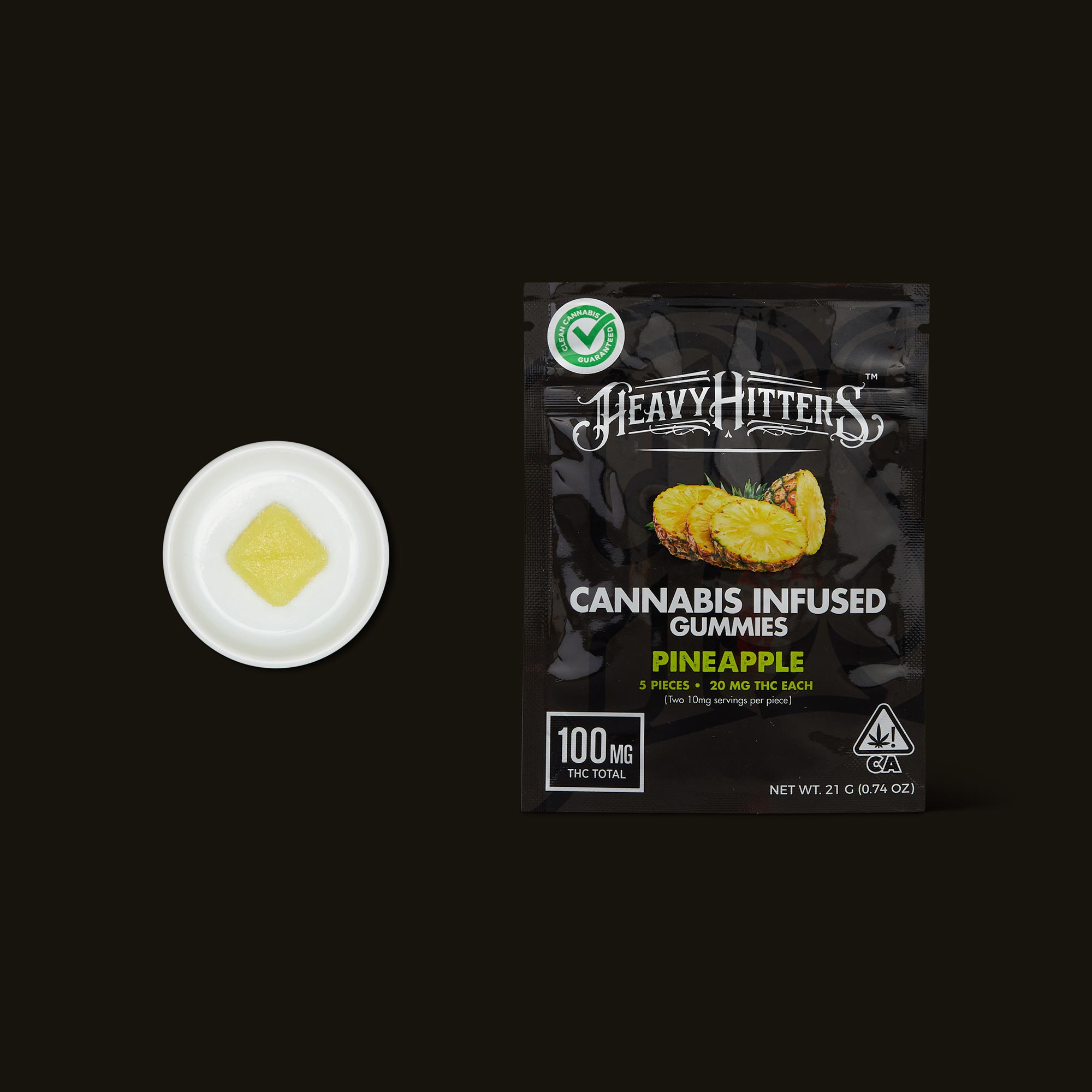 Ranked 77 of 189 in Edibles for feeling Euphoric. 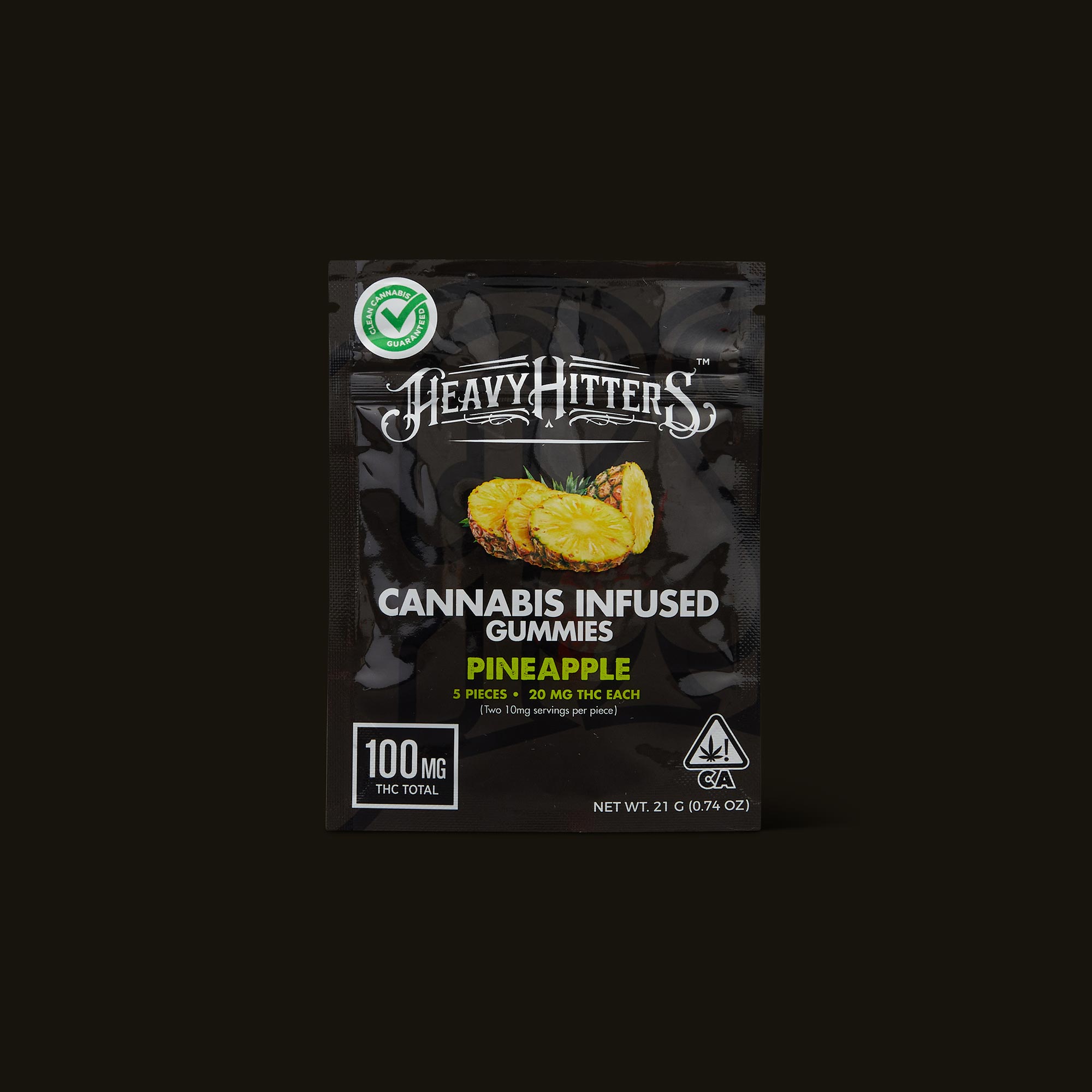 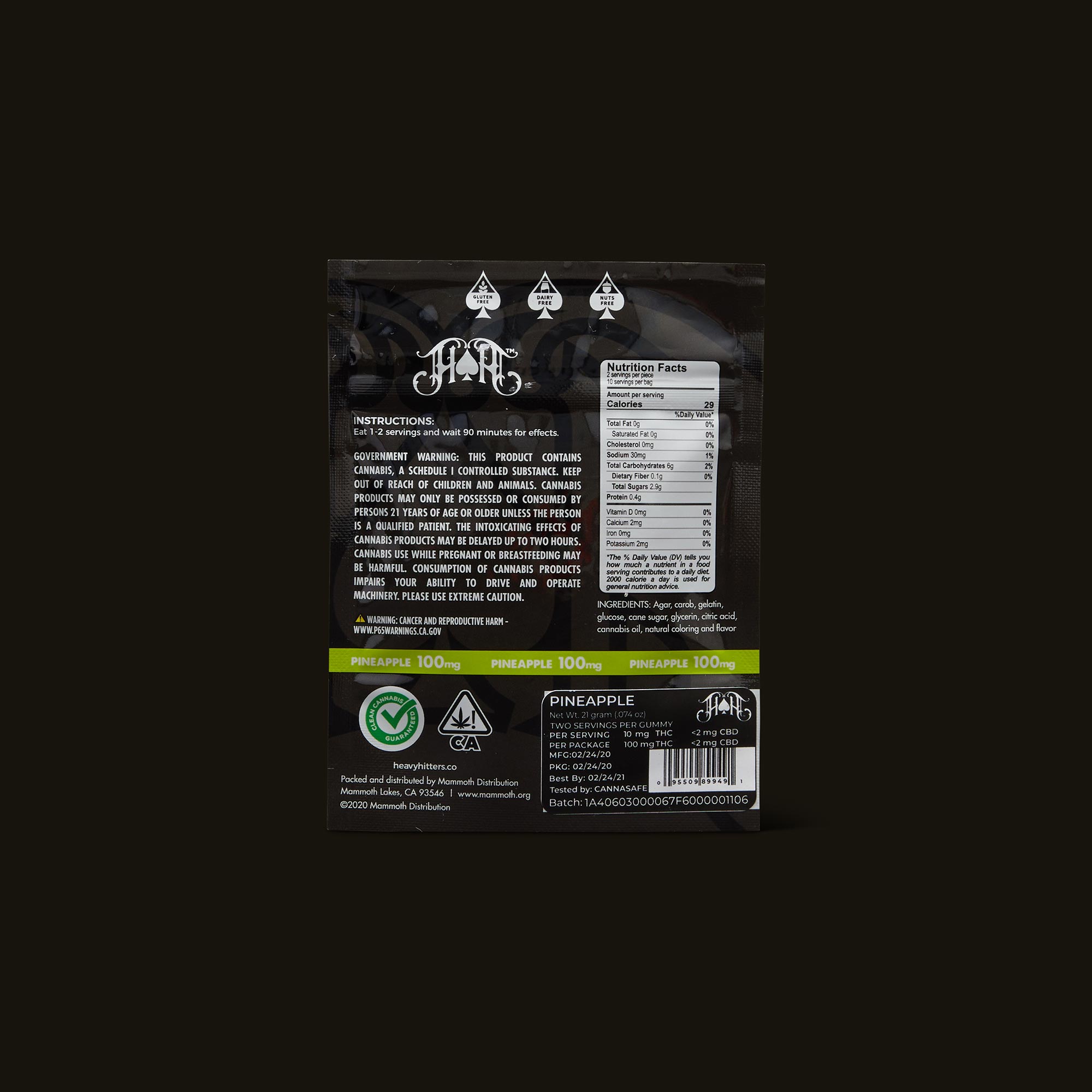 As our committee rates Pineapple Gummies, we capture their experience in real time through our ratings app and report everything back here.

Ranked 77 of 189 in Edibles for feeling Euphoric.

These gummies make you think more deeply and carefully about the world around you, and how you fit into it.

10mg THC for one half

IN REVIEW: Newbies beware, these Heavy Hitters’ Pineapple Gummies stay true to the name and pack in 20mg of THC apiece. So split one with a friend for your first go around, and settle in for what should be a memorable ride. These edibles undergo the same level of refinement as their vapes, ensuring you a clean and reliable high every time. The taste may leave something to be desired, but any vegans looking for an edible without animal-derived gelatin may have found their go-to. These are just as great for a hike as they are for chilling and recovering after.

With summer just around the corner, it’s a confusing time to be quarantined in California. The beaches opened, then closed, then opened again. It’s okay to hang out in small groups, I think. But with Trump’s war on the CDC and reason in general, it’s hard to tell what’s safe. Then, and perhaps most importantly, the hot, sticky reality of spending Summer 2020 in an elastic face mask is beginning to materialize, the true horrors of which we’ve yet to fully comprehend.

Even as a cannabis journalist with unlimited access to products that get you high, I’ve found myself in a state of something I’ve dubbed the Mid-Quar Blahs. The result of quarantine’s combo of months-long isolation and total lack of social interaction, it’s a sweet spot once described by Pink Floyd as comfortably numb. Not happy, not sad, just blah.

While spending summer in this strange state of social purgatory is a huge fucking bummer, I’ve been lucky enough to find an edible that can take the blahs out of what feels like the millionth episode of this boring never-ending story: Heavy Hitters Gummies.

Heavy Hitters is a popular Cali vape brand known for their high-quality distillates and reliable vape pens, as well as a kind of new metal/Monster energy drink aesthetic popular amongst the tatted bros of the West Coast. Prior to trying these gummies, I had no idea Heavy Hitters made gummies at all. But boy am I glad they do.

“Two miles, one hour, and a million wildflowers later, I was in a total state of bliss. ”

The day these gummies spiked the vanilla milkshake that had become my existence, I was bored enough to agree to a hike with a very sharp incline on a very hot day. Had it not been for the pandemic forcing me to watch literally all of the content on Netflix, I never would have been down for something so hard. But I was feeling Blah. Totally unmotivated. I wanted out of the prison of boredom I’d constructed for myself. In hopes of making the most out of this rare outing, I ate two (40mg THC worth) of the bright yellow pineapple-flavored gummies on the way to meet my friend at the bottom of the mountain. *It should be noted that I’m a professional cannabis writer who consumes large amounts of THC daily, so to me, 40mg is not crazy. To anyone else, it’s a little crazy. If you’re reading this, start with ½ a gummy (10mg THC) and go from here.

In my years spent reviewing every weed product imaginable, I’ve found there to be two schools of edibles. The new school leans more towards the medicinal/wellness end of the spectrum, offering microdose edibles (1-5mg THC per serving) with an attention to organic ingredients that move the genre away from the junk food archetype of edible cannabis. Old school edibles, as I’m referring to them, tend to be more focused on getting you lit than anything else. They offer high dosages in smaller serving sizes, with less care when it comes to ingredients and whether or not the edible is actually something that’s good for you.

The Heavy Hitters Gummies are great in that they bridge the gap between these two schools of edible theory (lol), giving you a high dose (20mg per gummy) edible that still has chill, all-natural ingredients like agar, a health-conscious alternative to animal-derived gelatin.

“I was light-headed and happy, lost in awe of the beauty that is being alive. ”

Despite Heavy Hitters’ attention to ingredients, the flavor of these gummies totally sucks. As soon as I put the impossibly yellow goo square in my mouth, I grimaced. Whatever tropical notes of pineapple and coconut I picked up on in the smell were eviscerated by a total saccharine overload. Once I’d struggled through the tooth-numbing sweetness and swallowed them both, a slight hint of pineapple flavor was traceable. But overall, it was not a pleasant experience.

Roughly thirty minutes later, I arrived at the mountain in a state of total regret. The come up of the gummy transformed me from a bored person eager to feel alive to a euphoric puddle that in no way resembled the person who agreed to this hike. It was too late to turn back. I laced up my vans and started walking.

Two miles, one hour, and a million wildflowers later, I was in a total state of bliss. The initial waves of euphoric laziness were long gone, leaving me with a high so uplifting, so focused and so bright, I felt I could conquer the world. Incline after incline led to new, unexplored terrains. We passed through groves of oak trees in fields of long green grass. Wildflowers and mustard seeds silhouetted against the sky, leading to a sea of golden reeds on the mountain’s plateau.

While normally this kind of hike would have knocked me on my ass, nothing could kill my vibe. There, covered in sweat, blindingly high on a combination of the gummies, endorphins, and the first fun of Summer 2020, it was the happiest I’d been in months.

Hundreds of feet of elevation later, we reached the summit, well above the clouds. I was light-headed and happy, lost in awe of the beauty that is being alive. Not only did these gummies rid me of the terrible quarantine Blahs, but they also gave me a new appreciation for the concept of mindfulness altogether.

Equal parts euphoric and uplifting, these gummies allow you to remain productive despite being extremely stoned. With all-natural ingredients and a high dosage ratio, you don’t have to eat a shitload of candy to feel something, which is always a plus. So if quarantine has you feeling bored, lackluster, and numb to the world around you, struggle through the also lackluster flavor of these very potent gummies, and break out from the shell of your former self.

Be the first to review Pineapple Gummies from Heavy Hitters and help others find their high.