Kanha’s Indica Strawberry Gummies are sweet edibles that deliver a euphoric head high. The physical result is relaxing and gentle, so take this high to the sofa and stretch out. It’s a warm and inviting buzz.

Ranked 82 of 373 in Edibles for feeling Relaxed. 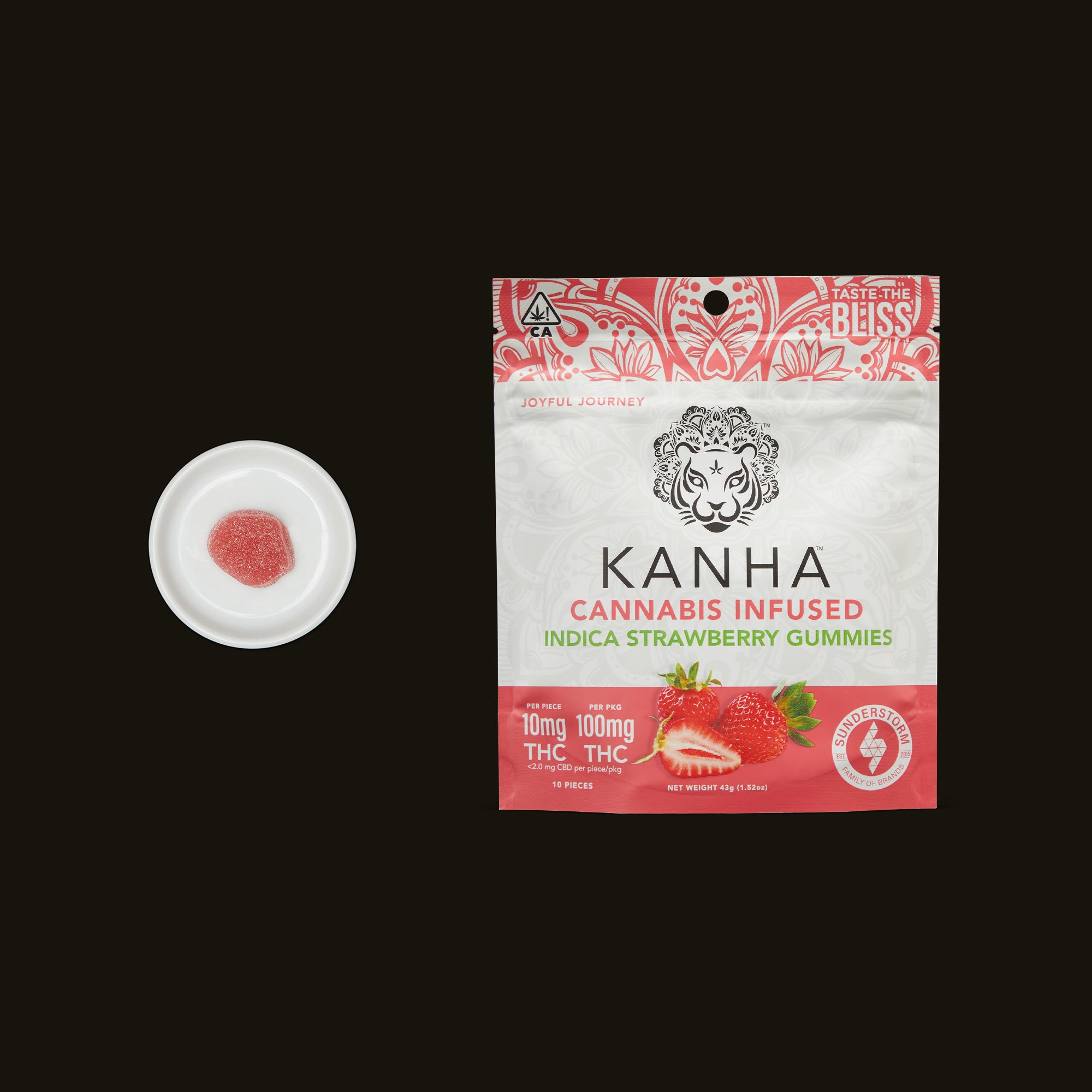 As our committee rates Indica Strawberry Gummies, we capture their experience in real time through our ratings app and report everything back here.

Ranked 82 of 373 in Edibles for feeling Relaxed.

This took about 45 minutes to take hold. I couldn’t be more comfortable if I was writing this from a kangaroo pouch.

IN REVIEW: Kanha gummies are stupid soft, and unlike some others, they stay that way. So even if they stick around your shelf for a few weeks, you won't have to approach them like you just had oral surgery. The flavors are both remarkable and remarked upon by everyone at first chew, and their Indica Strawberry Gummies are no exception. Ten milligrams of THC can be an undertaking for some, so it’s fortunate that their size makes them easy to split in two to share or save.

Of all the cannabis gummies I have consumed in life, the overwhelming flavor of choice has been strawberry. When I came across Sunderstorm’s Kanha Cannabis-Infused Gummies, you know the strawberry option caught my eye. I was expecting just another run of the mill, artificial flavor, but what I got was probably the best tasting strawberry edible I’ve had to date. These gummies, at 10 mg THC each, are just an exquisite balance of sweet and sour, coupled together with a superior mouthfeel. This edible shot out from the starting gate.

Only one minute went by before I started seriously considering having another 10 mg piece. My personal limit is normally about 10 mg, and occasionally I will splurge for an extra 5 mg. Rarely will I ever hit 20 mg, but because this strawberry edible was so damn tasty, I decided to take the plunge.

It turned out to be a pretty accurate decision to describe this endeavor as a plunge because the onset of this high took on the form of water — very fluid. I could make out some heavy rain clouds forming in the distance from my kitchen window, and decided to take the dog for a walk before it started to pour. I could palpably feel the humidity in the air, rare for southern California. The symbolism of dark clouds rolling in was not lost on me, and I made a conscious decision to not fall prey to negative thinking or preconceived notions. This turned out to be the right mental tone for this high, because it started to open itself up from that point on.

“When I opened my bedroom window to feel the rainy mist, it felt like I had kicked out the only window of a cramped U-boat at sea.”

In that sense, this high took on a very pliable nature. It helped me really think through whatever anxiety I was having at the moment, and I could feel resolutions and realizations coming in real-time. I even stopped to jot down a few urgent ideas into my iPhone notes app. Looking over them later, I strained to see the importance of it, but that will sometimes happen. I wrote down “Hammer Silencer” and “Netflix for Dogs.” One sounded more like an invention and the other a really bad business plan, though potentially adorable. I’m sure I was just overlooking the nuance of it all.

The incredibly high came about one hour after ingesting the two strawberry gummies. Luckily by this point, I was back home and lounging in bed. On cue, the clouds descended and so did the rain. It’s not often you get a rainstorm in sunny southern California, so you would be foolish not to relish the moment. For me, being high on 20 mg of edible gummies was more than enough to do the trick. When I opened my bedroom window to feel the rainy mist, it felt like I had kicked out the only window of a cramped U-boat at sea. I felt the sound of the crashing rain across my entire body. I lost myself in the sensation and dreamt that I was aboard a huge ship, catching sturgeon with my hand, wearing a loincloth and showing off my anchor tattoo to the island villagers. Then my wife called my name and told me to come downstairs.

“The gummy took on the form of a wise therapist lurking in the hallways of my subconscious.”

Her idea of a rainstorm setup resembled something more like a Lifetime holiday movie than a swashbuckling adventure. Candles were lit, the fireplace suddenly roaring, and the whiff of holly and oak in the air. I even recall the faint sounds of Johnny Mathis playing. Whether upstairs or downstairs, the effect was still transportive. It only proved that you could be anywhere with this high, and still feel worlds apart. That feeling of escape was a major trait of this edible. I feel like it would have suited me much better for a long hike, but as I don’t normally venture out with such a high dosage, I played it safe. But, that will be the plan for next time.

Sunderstorm created a truly delicious gummy that worked as a real problem solver for me. At times, the gummy took on the form of a wise therapist lurking in the hallways of my subconscious. While dry eyes and dry mouth certainly played a part, this high was a deeply euphoric experience that made for an intense journey of self-discovery and sensorial overload.

Be the first to review Indica Strawberry Gummies from Kanha and help others find their high.