Ranked 38 of 321 in Edibles for feeling Euphoric. 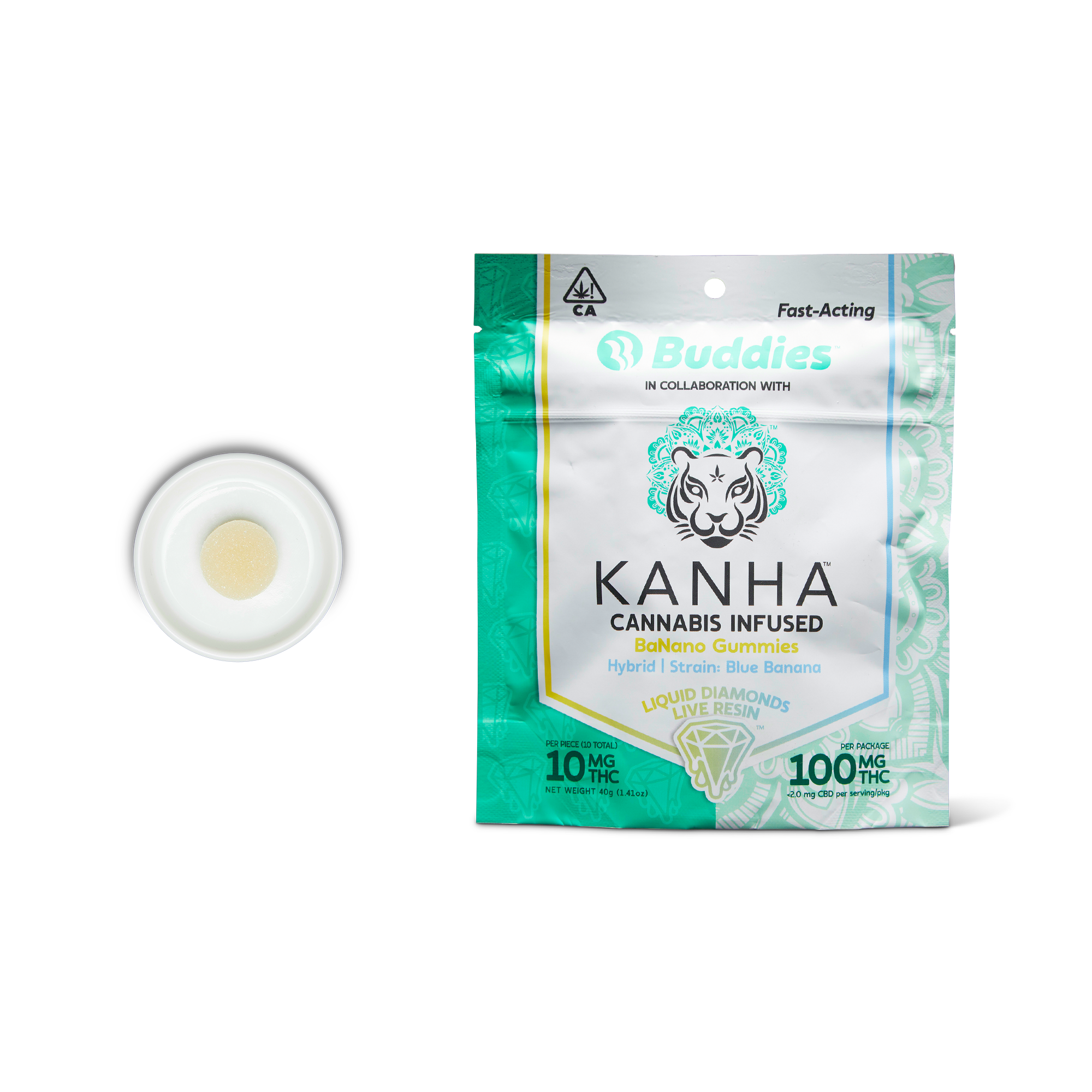 As our committee rates Kanha x Buddies BaNano Live Resin Gummies - Blue Banana, we capture their experience in real time through our ratings app and report everything back here.

Ranked 38 of 321 in Edibles for feeling Euphoric.

Portrait of a Blue BaNano

Kanha and Buddies have introduced a real relaxation machine of a live resin gummy.

In Review: Every hybrid BaNano Gummy from Kanha and Buddies contains 10mg of THC thanks to its carefully extracted Blue Banana liquid diamonds live resin. Each piece has a classic banana flavor that’s supplemented by a sweet-berry kick, and they work together for a fruity experience that never feels overpowering. Expect the heady buzz from this indica-leaning edible to add a bit of fun to any social setting, and a fast-acting experience that vibes well both day or night.

This liquid diamond live resin gummy from Buddies and Kanha is about as potent a 10mg gummy as you are likely to come across—and I mean that in the best way possible. Thanks to the nanotechnology involved in crafting these, the onset is as fast as promised. And while I usually don’t like banana flavored anything, I found these to be rather enjoyable. And there are also nice notes of berry to be found in the aftertaste that are likewise pleasing and mild.

My sister was in town, and we’d planned a trip to the Getty Museum because she wanted to show a bit of culture to her four kids. I decided it would be the perfect time to take an edible—both as a means of dealing with several rambunctious children, and as a way to appreciate some art.

“There is something about a strong edible buzz and a panoramic view that goes together like peanut butter and jelly.”

We all stuffed into the minivan (with me taking shotgun), and before we could get on the highway I’d already started feeling the warmth and openness of this live resin gummy. It was probably only around 10 minutes in total, which is an incredibly quick onset for me. The ride there was peppered by a non-stop barrage of rap music and kids fighting one another. Yet, I couldn’t have been more calm.

There is something about a strong edible buzz and a panoramic view that goes together like peanut butter and jelly. Arriving at the museum, one could look out across the cityscape of Los Angeles and feel both very tiny and alive with potential. Which is to say that I found this high to be very awe inspiring.

The immersive quality of it complimented this cultural outing to a T. I even found myself clasping my hands behind my back and doing that inquisitive stroll that discerning art critics do. Not that I had any clue. I just appreciated the aesthetics of it all.

For the more absurdist artworks (i.e. a photograph of two oblong lemons), I would simply look at my eldest nephew and say, “Get a load of this one,” and he would nod his head before we both laughed. It went on like this for a while, and we found a nice rhythm as we went from room to room. Him with his two Coca Colas, and me with my 10mgs of banana and berry flavored live resin.

For those with appetite problems, the Blue BaNano may quickly become a savior. And after an hour or two of cavorting around, I was absolutely famished. The fam and I hit up the museum cafe, and we enjoyed a nice lunch outdoors overlooking the Japanese garden.

“There was a consistent feeling of subtle bliss running through this entire morning.”

There was a consistent feeling of subtle bliss running through this entire morning. Nothing seemed to faze me in terms of getting anxious, angry, or impatient. To achieve this state through L.A traffic, finding parking, and being surrounded by kids is a true feat indeed.

This hybrid edible leans more towards the indica side of things. Tranquility seems to abound, and one could even catch some Z’s if they are so inclined. Towards the tail end of our museum visit, I watched the kids play in the outdoor garden as I laid on the artificial grass in gentle repose. Simply lying on my back and staring up at the sky without that nagging feeling in the back of my mind telling me I have to do something was well worth the experience. Taking in some art and being with family just made it all the more sweeter.

This high, while pumping out some real relaxation vibes, also allows the user a great deal of focus and engagement. I never felt groggy or disconnected. It simply allowed me to be in the moment and give myself over to the inspiring nature of my setting.

This collaboration between Buddies and Kanha produces a truly tasty liquid diamond live resin gummy that could spark both creativity and appreciation, while also relaxing you physically and mentally. A balanced buzz through and through, it reached inside and knocked away the cobwebs while letting in a bit of culture and repose. Not bad indeed—Banano from Kanha and Buddies will be a pal I pick up and enjoy again and again.

Be the first to review Kanha x Buddies BaNano Live Resin Gummies - Blue Banana from Kanha and help others find their high.