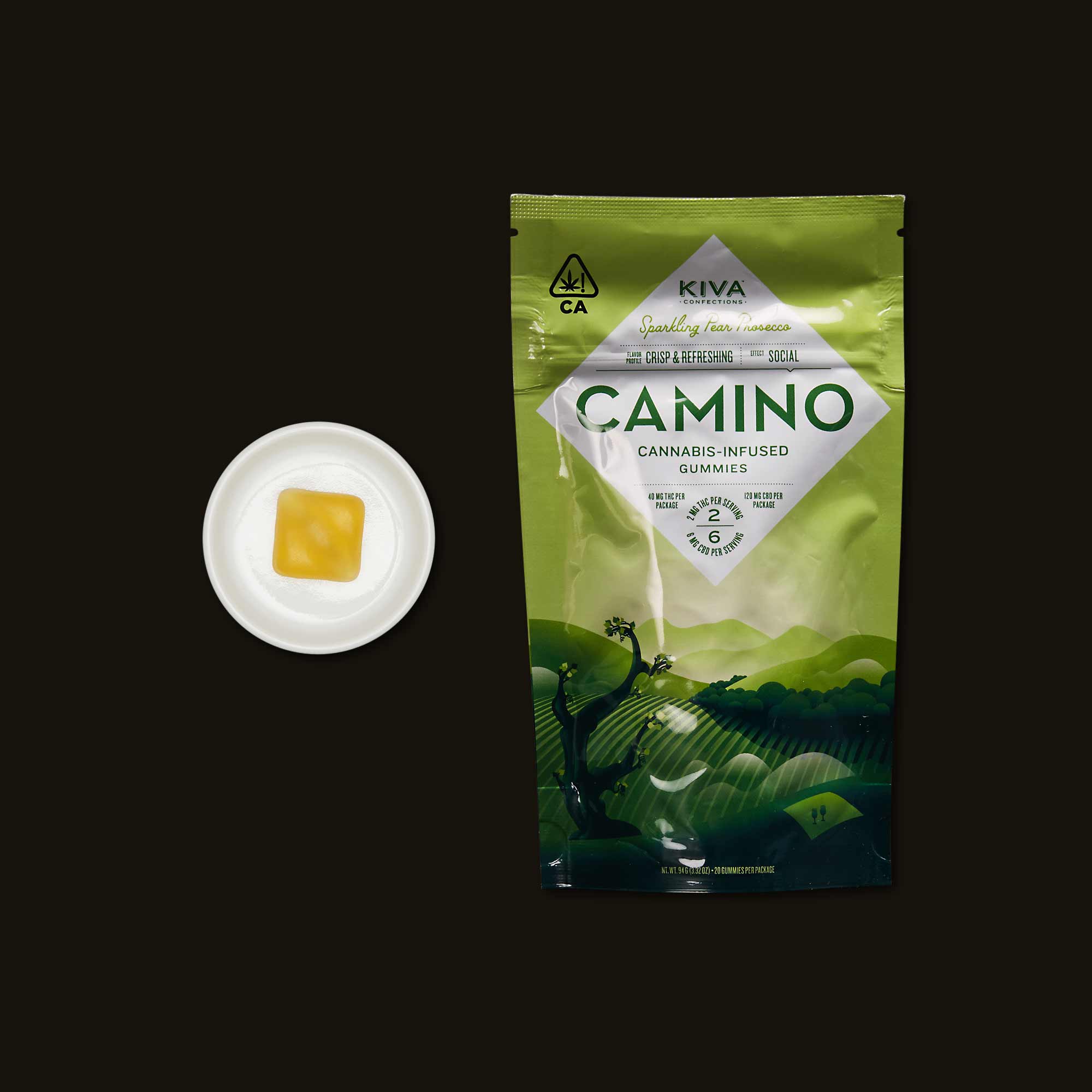 Kiva's Sparkling Pear Camino Gummies are the full package. Beyond their fantastic flavor and texture, the high is typically mild and friendly, making them perfect for cannabis newcomers. You can expect a nice, relaxing body buzz accompanied by a very subtle but calm head high. Since these are packed with CBD, you can feel good about using them to ease mild aches and anxieties.

Ranked 87 of 217 in Edibles for feeling Relaxed. 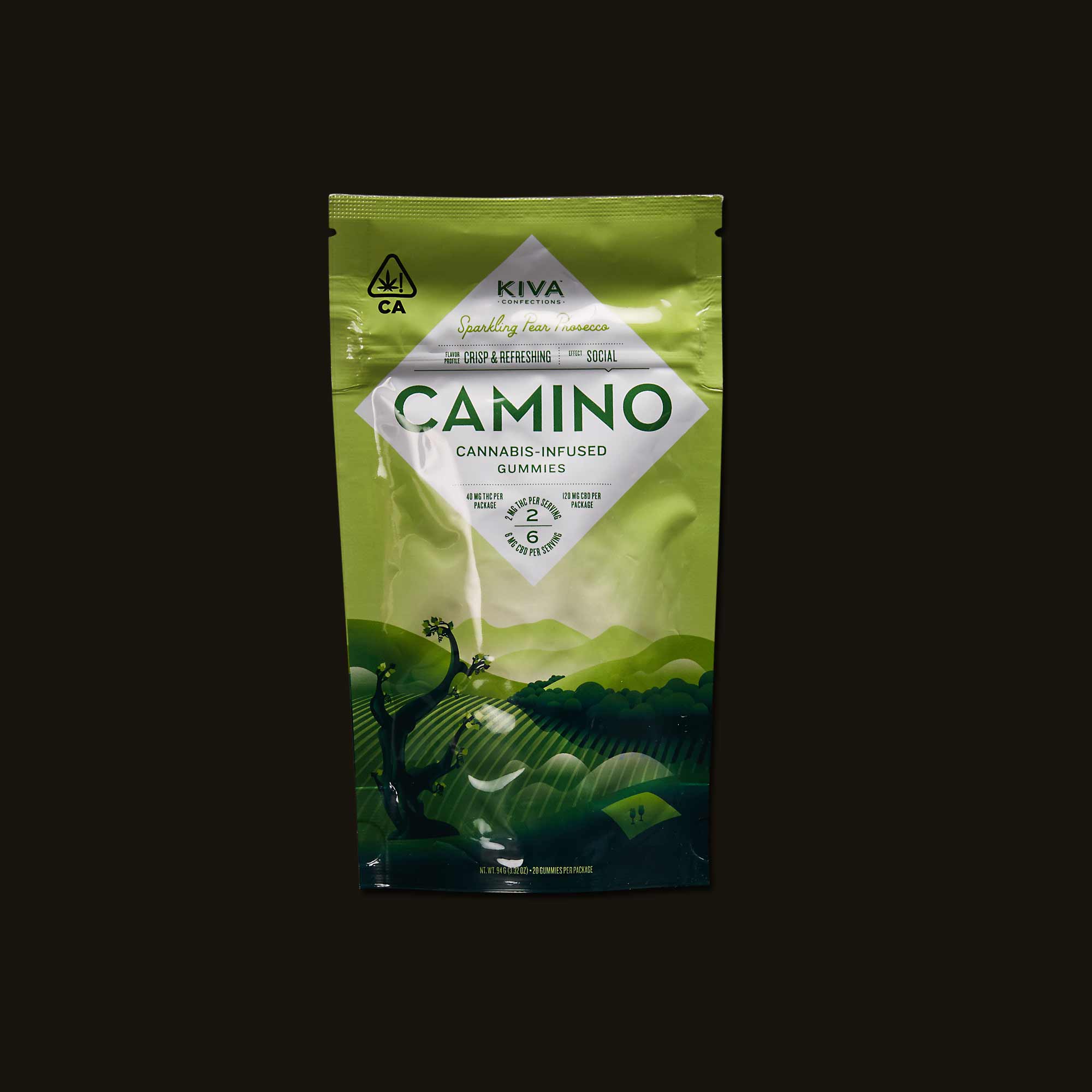 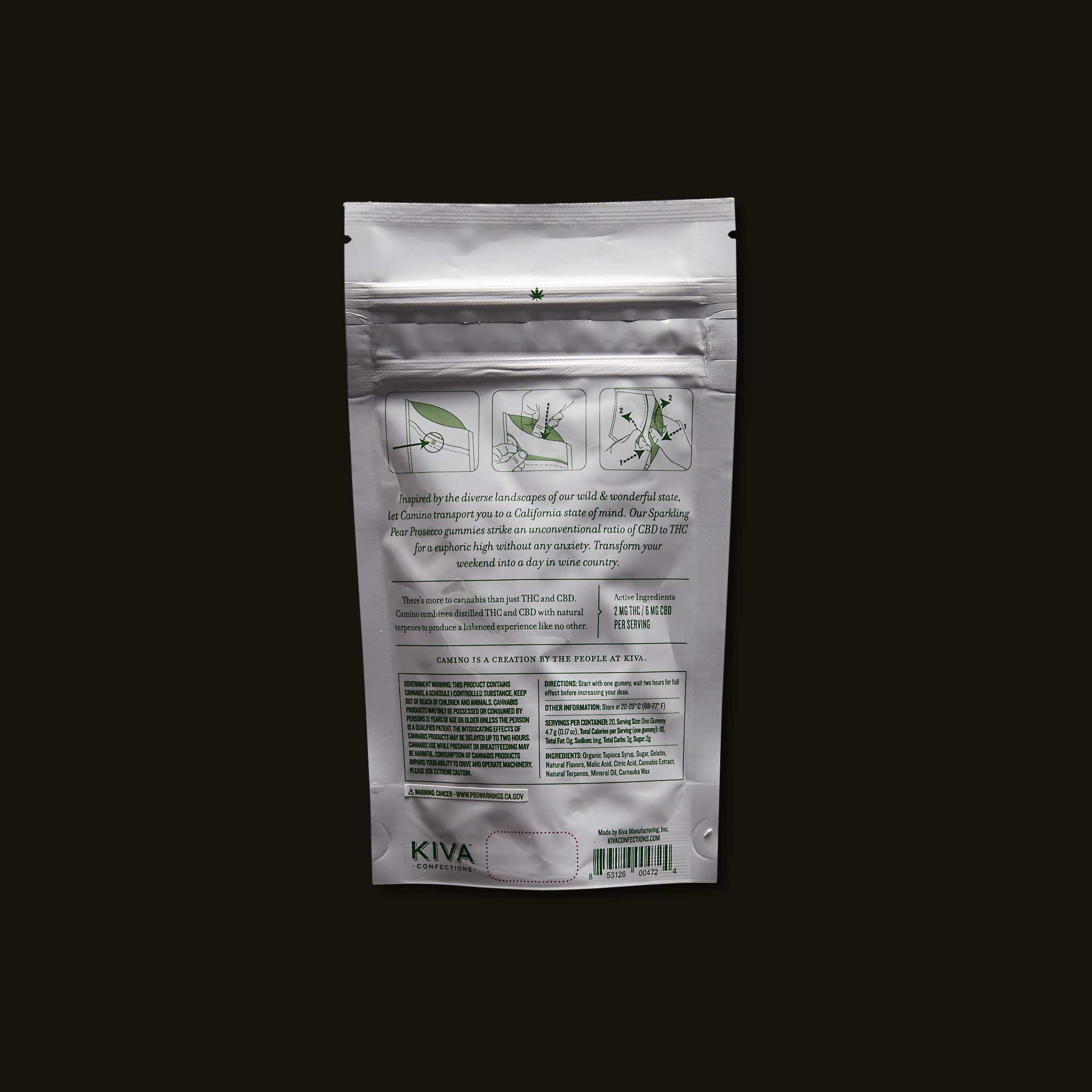 Ranked 87 of 217 in Edibles for feeling Relaxed.

Let me start by saying I appreciate low-dose edibles because they allow you to control your dose precisely and build up to an ideal high. I knew that, at 2mg THC and 6mg CBD per Sparkling Pear Camino Gummy, the high likely wouldn't register on my biological radar. So I doubled the dose and to my satisfaction found a very specific sweet spot. On day two of auditioning these champagne fizzy candies, I quadrupled the dose and found an even deeper, stickier, sweeter sweet spot.

There is an underlying funk to these gummies that I really got into, a tang that landed somewhere between skunky and fermented. While I wasn’t picking up a remarkable pear flavor, there was the suggestion of fruit. Similar to those barely-there La Croix flavors, it tasted like someone describing what pear tastes like in an ASMR recording. My first assertion was that these gummies were imitating fizzy cider, the type children drink from champagne saucers at weddings. Instead, it was a mature interpretation of the flavors, presented in a medium-firm gummy that was easy to roll around my mouth. Frankly, these were so delish I would work my jaw around them any day of the week—even without the cannabis infusion.

But that cannabis infusion is why I’m here, and when it activated during session one, I was taken aback by the unmistakable onset. The 4mg of THC hit me like a down pillow to the face while the 12mg of CBD cushioned the blow with an uplifting body buzz. There was a discernable head high I had not prepared for, and as such, didn't quite know what to do with. I thought I’d be content to putz around the house, but the high was too cerebral for dusting and doing laundry. I sat down to my desk, feeling like a geyser of creativity was bubbling just beneath my surface, and proceeded to clean my email inbox for a half an hour.

Session one’s effects maintained themselves for about 2.5 hours, and day two’s mega-dose lasted only slightly longer, clocking in at just over 3 hours. On both days, there was a soft, sweet feeling of contentment left behind once the high had evaporated. Kiva’s gummies are sophisticated in both flavor and effects, and I found the dosage fun to play with. For me, it was two gummies and some creative direction or four gummies and a maniacal workout plan, but it seems like wherever your sweet spot is, these gummies are going to get you there safe and sound.