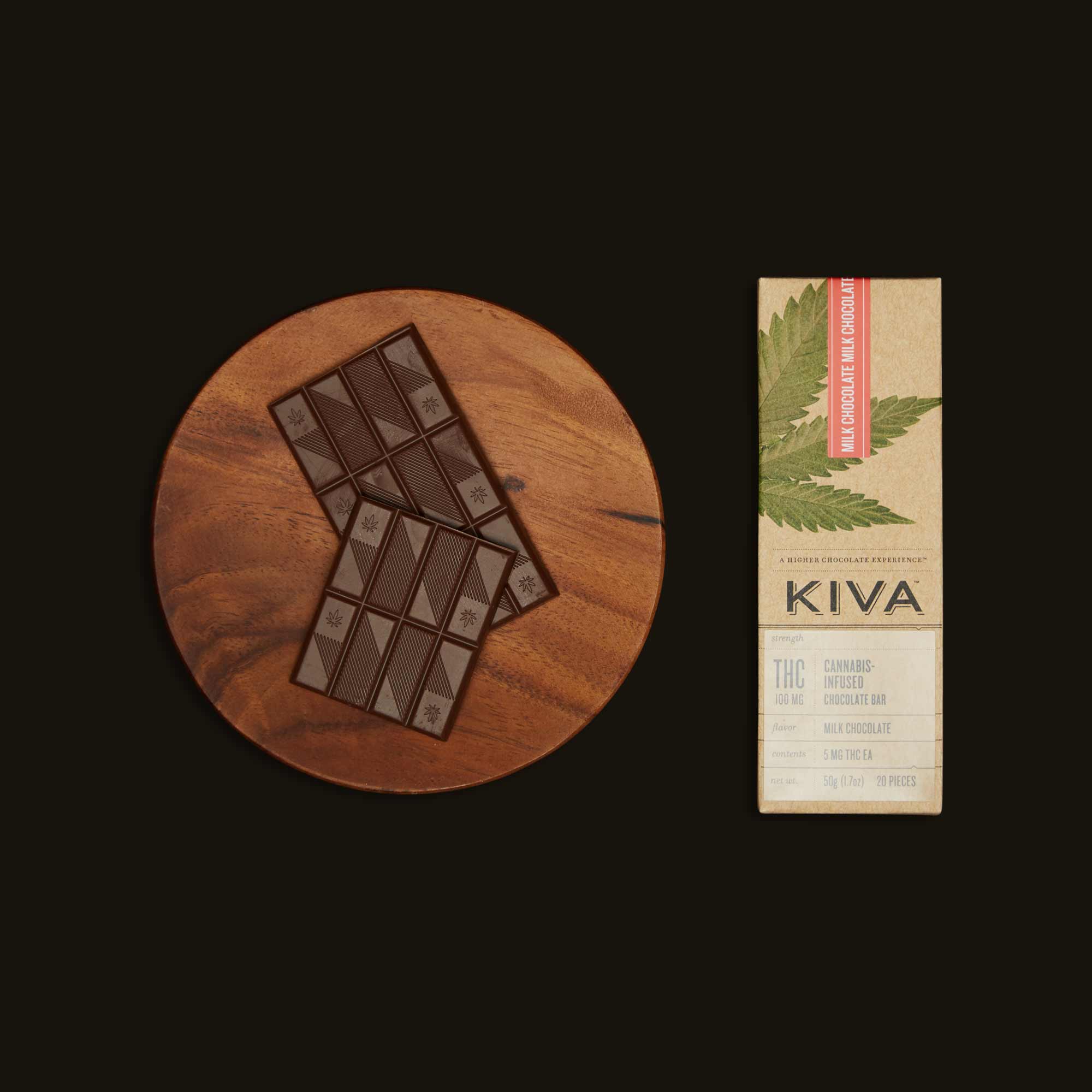 The Milk Chocolate Kiva Bar packs 5mg of THC into each piece of this melt-in-your-mouth edible. After noting the captivating cocoa aroma, you'll likely become just as enamored with the creamy flavor. You can expect a calm, unwinding high good for a post-workout pampering on the couch, but try to keep the eye drops nearby. Buy Kiva Milk Chocolate online simply by clicking the blue "Buy Now" button and choosing the distributor of your choice to order online and pick up or have it delivered.

Ranked 112 of 171 in Edibles for feeling Euphoric. 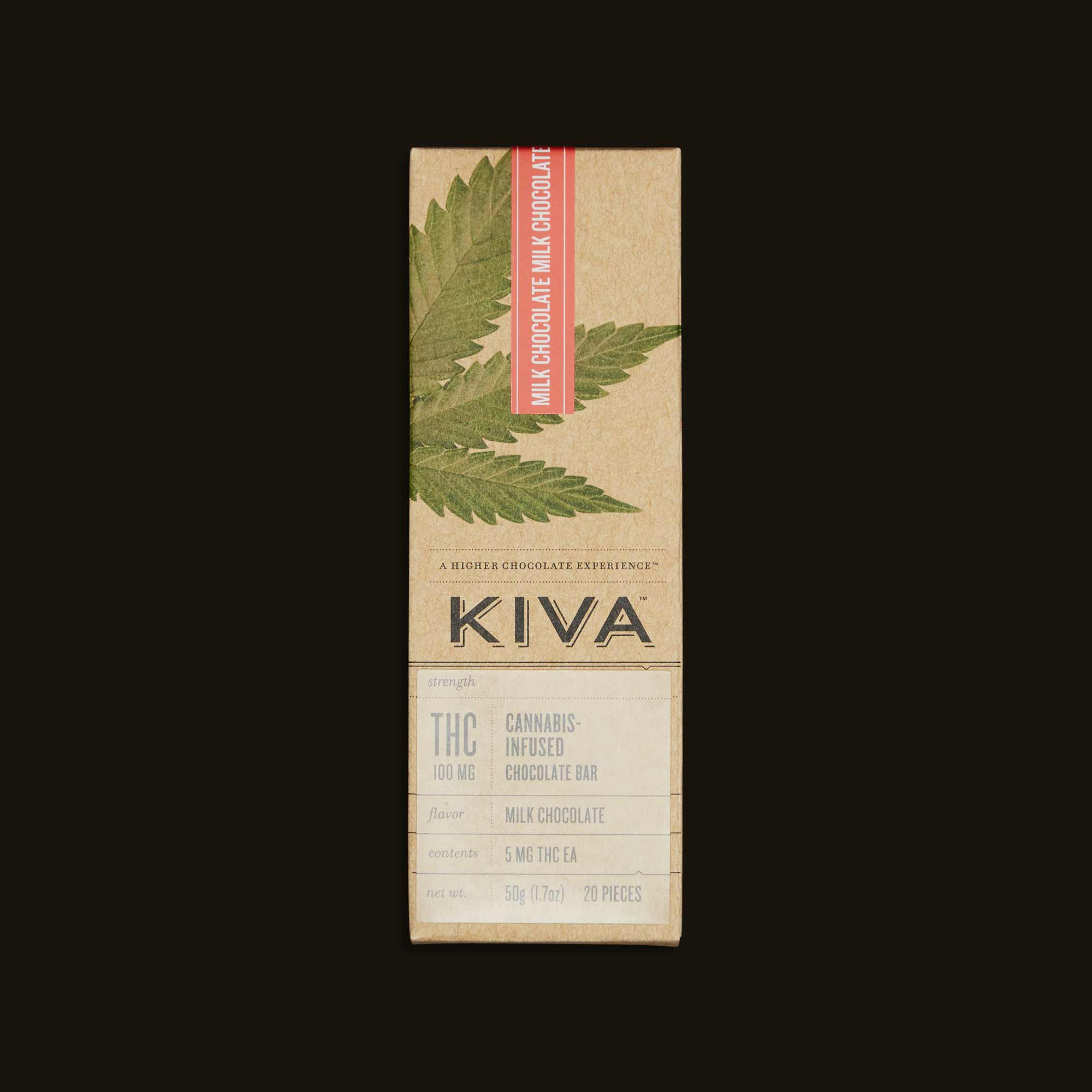 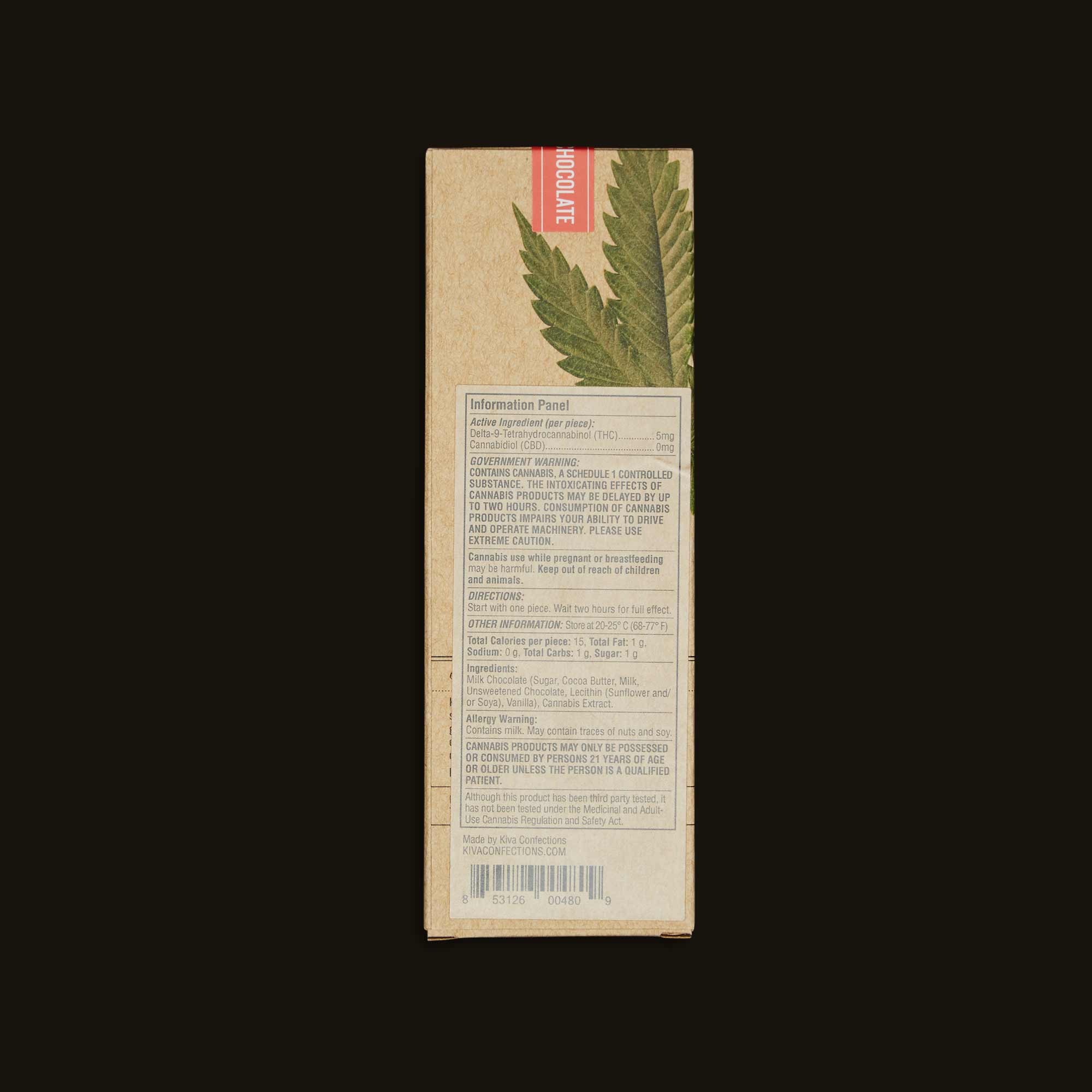 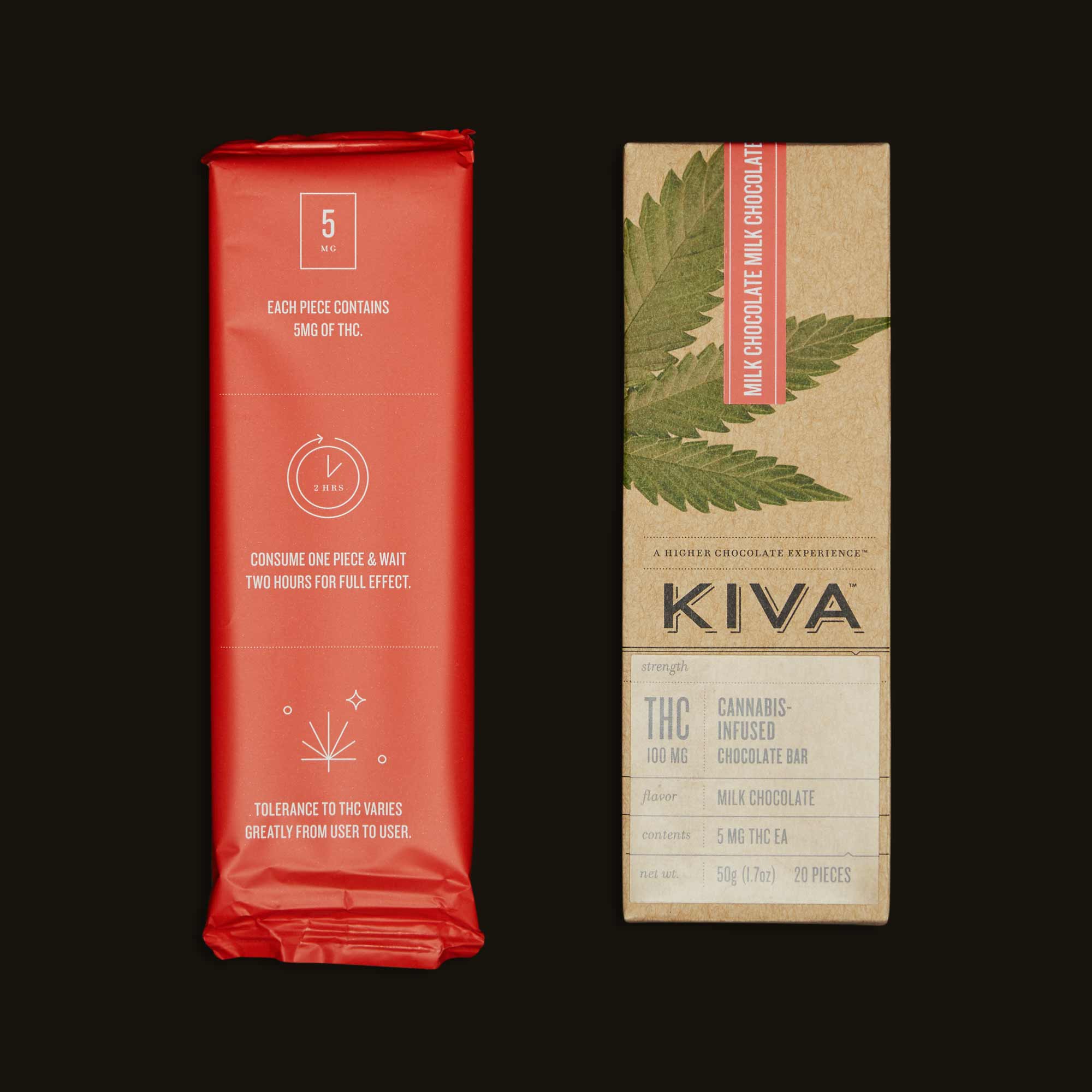 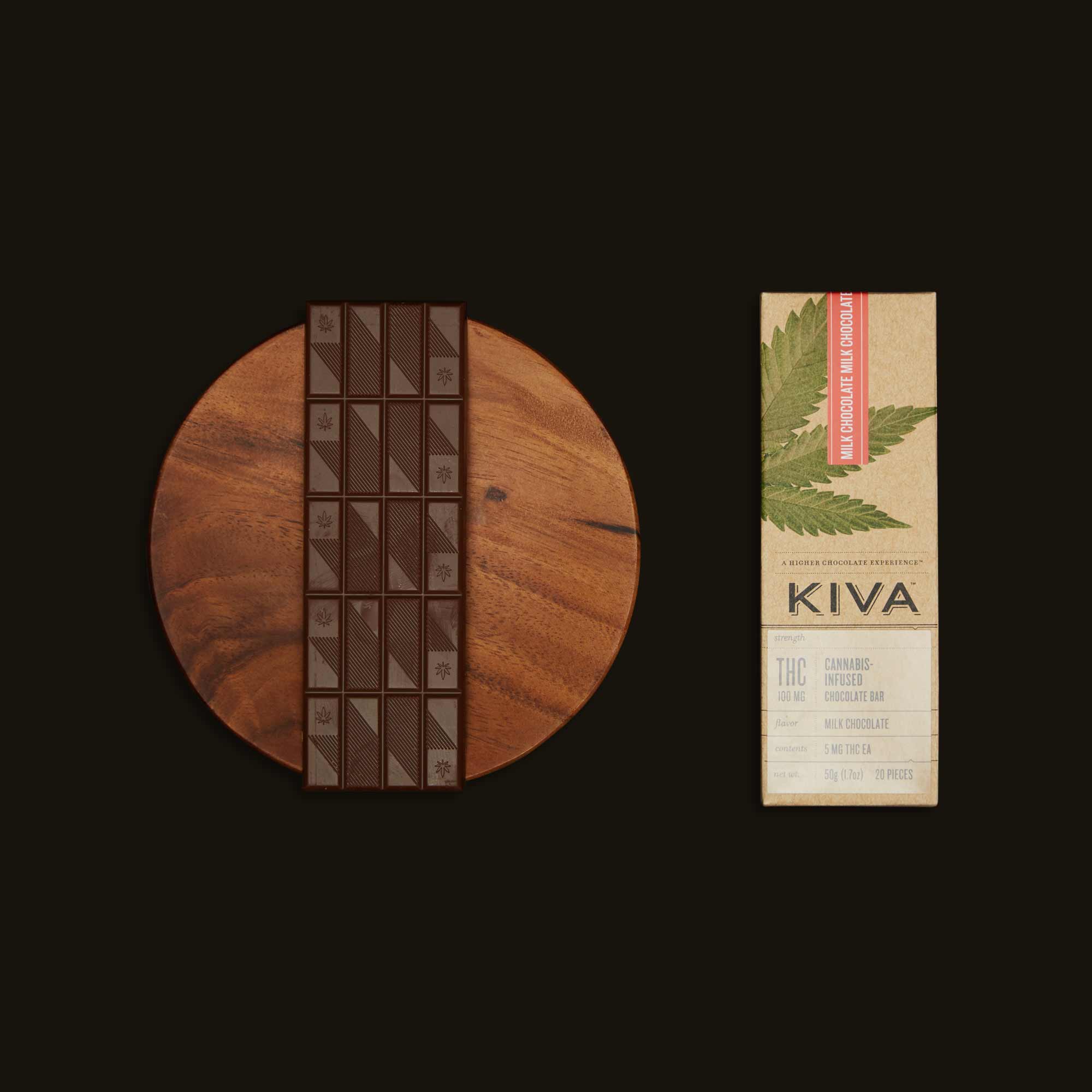 As our committee rates Milk Chocolate Kiva Bar, we capture their experience in real time through our ratings app and report everything back here.

Ranked 112 of 171 in Edibles for feeling Euphoric.

It’s always a pleasure to eat fine chocolate in the name of cannabis analysis, but the days I spent with Kiva's milk chocolate, dark chocolate, and chocolate-covered coffee beans were uniquely extraordinary.

Kiva is one of California’s most popular edible brands, and with a formula that features cold-water hash, handcrafted artisan chocolate, and clever packaging, it represents its home state well. I was lucky enough to stock up on three of their top sellers—Terra cannabis-infused espresso beans and both the milk and dark chocolate cannabis-infused chocolate bars—before spending a week and a half visiting my family.

On this visit, I took Kiva’s chocolates to three wholly different events and found that a perfect high has as much to do with the atmosphere and company as it does with the cannabis I consume.

The cannabis espresso high is singular, and if used with foresight can lead to a super radical experience. For instance, a trip to downtown LA’s’ fashion district, a square mile of alleys and narrow streets thick with bodies, textures, colors, and noise, was transformed from a typical shopping trip into a carnivalesque adventure after three of these toothsome tidbits.

Each of these infused coffee beans contains 5mg of THC enrobed in silky, glossily tempered dark chocolate without a trace of cannabis flavor (it’s all chocolate and coffee here) and there are 20 beans in a container. Finding the sweet spot between caffeine jolt and THC psychoactivity is definitely tantamount to a magic carpet ride, so have at least a rough estimate of your limits before putting these bad boys in your mouth. I started with three beans, or 15mg of THC total, which is a moderate amount for my tolerance.

I started feeling the high kick in somewhere between 30 and 45 minutes after consumption, and the high came on swiftly. I felt like I was walking through a sheet of warm water. I exited a booth selling 99-cent costume jewelry and found myself deposited in a psychedelic, technicolor dreamscape. The trumpeting calls of booth barkers, the cacophony of banda, k-pop, and EDM, and the layered voices of thousands of shoppers all coalesced into a symphony that simultaneously made me want to shove my ears under the collar of my jacket and turn my full attention towards it and attend it like it was an opera. It was a weird dichotomy but also indicative of the caffeine/cannabis connection my body usually makes. It was one part sensory overload, one part sensory enthusiasm.

The electrifying high was the perfect match for the frenetic landscape. I was weightless, carefree, and lithe, darting between bargains like a bumblebee in a flower garden. And the experience lasted just long enough for me to get from one end of Santee Alley to the other, with an obligatory cruise through the surrounding fabric district blocks for roughly 2 hours. The comedown was a soft landing, and the high evaporated quickly with zero fanfare.

Both the milk and dark chocolate varieties of Kiva’s chocolate bars contain 5mg of THC per square, with an entire bar boasting 100mg of THC. The bars are comprised of smooth, top-shelf chocolate, both with a faint suggestion of skunky cannabis beneath the veil of premium cacao. Personally, I love the taste of cannabis, so flavor-wise these bars were working for me right off the bat.

My companion and I shared half the milk chocolate bar before checking out our friend’s comedy show. We ingested 20-25mg of THC each. The night was mellow throughout, and this high was not so much fodder for riotous laughter, but fuel for quiet introspection. Not a great look at the comedy club, I admit. About an hour after we’d eaten the chocolate, activation arrived in a borderline hallucinatory way. Suddenly, everybody looked… weird. In the middle of a conversation, I became distracted by how strange-looking my companion looked, and when I drifted out of the conversation to scan the crowd, I saw that every single person in the joint also looked weird. It wasn’t discomforting or unsettling, but I did spend at least a minute wondering what was happening (is it the lighting? Is this a strange secret coven? Did my glasses fall off without me noticing?) before realizing I was officially high and not in an alternate dimension full of odd doppelgangers.

My companion reported the same feeling: a strange shift in our realities that wasn’t ideal for enthusiastic socialization with adrenaline-flushed comedians. Once we snuck away from the comedy club, however, the high took on a much more ethereal vibe. With the pressure of socialization removed, the entire city felt like a limitless, twinkling wonderland. We wandered the rain-slicked streets for a while, window shopping and people watching, eventually ending the evening face-first in a pile of chili cheese fries.

A few days later, I tried the same dosage with the dark chocolate Kiva bar before spending the day strolling around downtown to research a writing assignment. Again, the chocolate had the decadent mouthfeel of any top-shelf-whole-foods-end-cap chocolate bar, albeit spiked with the sheerest aftertaste of cannabis.

“Kiva did not raise the bar, Kiva is the bar.”

Surprisingly, the quiet introspection that defined my experience with the milk chocolate was replaced by a sunny, low-key chatty disposition that propelled me through the day on a cushy cloud of cheerful complacency. It was lovely in the same ways as the milk chocolate (like a sunburst in the heart chakra) but affected my personality in a completely different way. Instead of retreating into myself, I was a wide-open flytrap ready to receive all the wisdom of the universe. Go figure. The dark chocolate high dissipated after about 3 hours and in the much the same as the milk chocolate—with a huge amount of potentially regrettable munchies (this time it was cheap sushi).

The biggest takeaway from my time with Kiva is that they have covered their bases as far as cannabis effects in their chocolates. To fuel a frenetic adventure, their chocolate-covered coffee beans are bar none. For more of an introspective, self-care vibe, their milk chocolate delivers in spades. And when a beautiful day calls for a beautiful disposition, the dark chocolate is unmatched. Kiva did not raise the bar, Kiva is the bar. I want to eat that bar, and maybe you should, too.