Plus Cloudberry Gummies are made with 5MG of THC, 1MG of CBN and 1MG of CBD per mouthwatering piece. These edible gummies are not going to rock your world, but this cannabinoid blend is best for helping you relax and drift off to sleep faster and sleep better. You’ll wake up feeling rested and refreshed. Read the full review below. 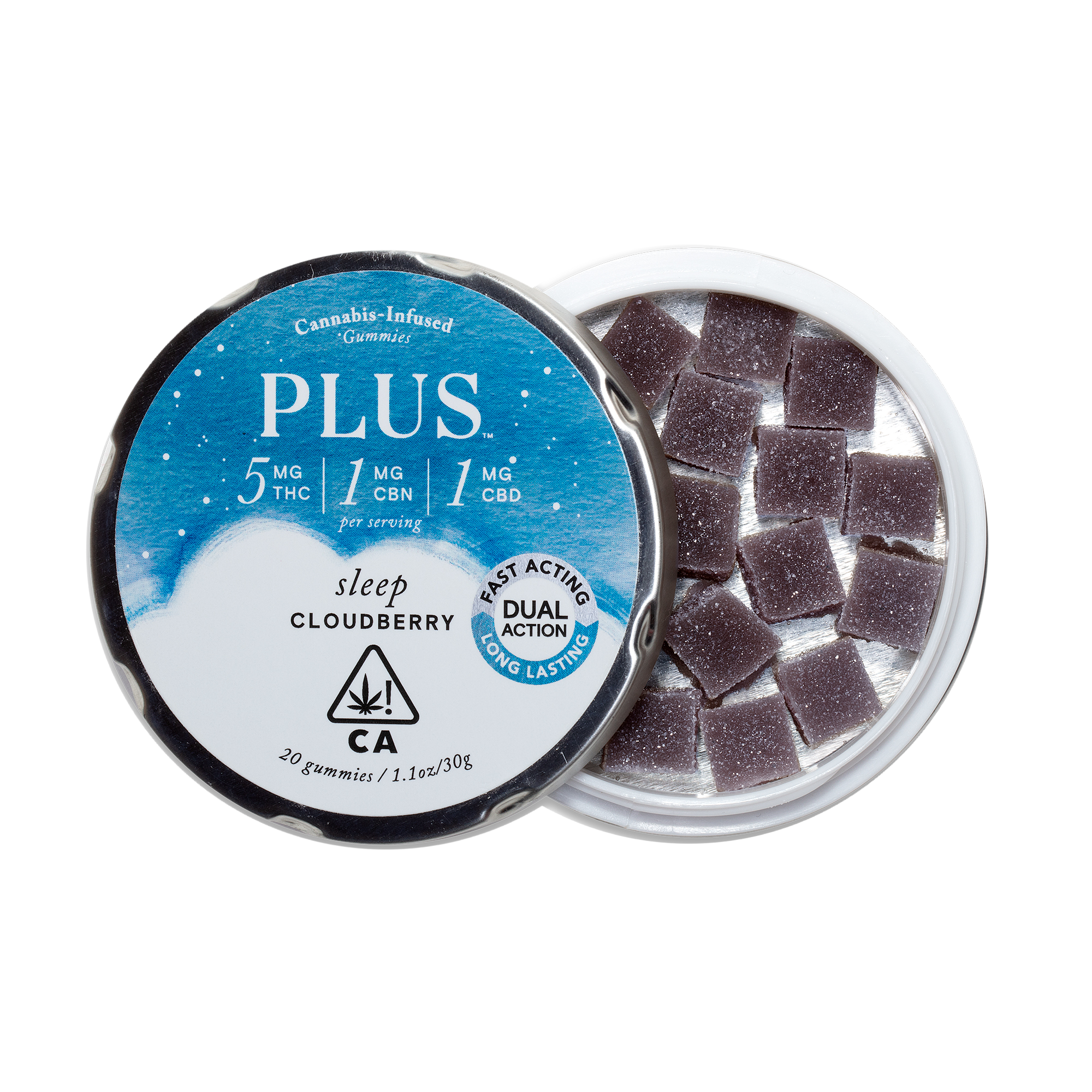 As our committee rates Sleep Cloudberry Gummies, we capture their experience in real time through our ratings app and report everything back here.

IN REVIEW: Both the Lychee and Cloudberry PLUS Gummies get high marks for flavor and mouthfeel. The onset is quick, and while the high is subtle, the ultimate effects of rest and recuperation are almost guaranteed. And unlike with some heavier edibles, in both cases Luca felt fresh, rested and ready to go the next morning. Grab these gummies and keep ‘em handy for getting the best sleep you've ever had or recovering after a workout or maybe binging Netflix, meditating and becoming one with the couch.

The only time I really have trouble sleeping is after a late night workout. For some reason, they make it nearly impossible for me to sleep. I tried PLUS’ Cloudberry Sleep Gummies in hopes of bucking that trend. Each square-shaped edible contains 5mg of THC, 1mg of CBN, and 1mg of CBD. I felt like I was getting quadruple teamed by these cannabinoids and their delicious blend of sour blueberry, lemon and ganja. The taste of cannabis is prevalent, but not overpowering. There’s a sweet harmony among the flavors that makes it almost mandatory to have more than one. So I had two. I’m a sucker for these sour gummies, when done right.

“There wasn’t any fogginess or drowsiness to speak of, and I had little problem getting out of bed.”

The effects started to hit me around the twenty-minute mark, which I found to be really fast. Normally it takes me twice as long to feel the funk. There was some definite euphoria going on, but not to a point that I felt distracted or anxious. It was just enough to put me in the mood for a mindless documentary. I found the perfect one about a knife maker who charges thousands of dollars for a meat cleaver. He also lives in the woods (of course). That was about all I could remember because before I even got to the gripping denouement of this man’s tale, I was fighting a losing battle against falling eyelids. I managed one last heroic feat of physicality for the night when I got up off the couch, turned off the TV and got into bed. By that point it was a done deal whether or not I was going to get any sleep. There was hardly a toss, never mind a turn. I slept where I’d landed.

I was hardly any worse for wear come the following morning. There wasn’t any fogginess or drowsiness to speak of, and I had little problem getting out of bed and into some running shoes.  I was able to set off on a miles-long run with ample energy and no grogginess.

After another workout later in the day, I was looking for something to help with recovery. The PLUS Lychee flavored CBN Relief Gummies are another medicated offering geared with that in mind. They contain only 1mg of THC, 2mg of CBN, and 3mg of CBD —I felt comfortable taking four. Don’t get me wrong, I could have easily taken the entire 20mg THC allotment, being that they tasted so good, but moderation is always best when dealing with cannabis-infused lychee squares. I’m not sure, but I think that may be an Abraham Lincoln quote. Or just something that entered my brain when all these different milligrams of cannabinoids took hold. Another very rapid onset that, similar to the previous night, had me poised for a couple hours of couch living with a dash of Netflix mixed in.

“If you’re used to having a glass of wine or two at night, these gummies could be a worthy substitute.”

While these didn’t make me as tired as the Plus Sleep variant, I was still feeling a subtle wave of relaxation that proved effective for winding down. If you’re used to having a glass of wine or two at night, these gummies could be a worthy substitute. I wouldn’t reach for them if I was looking for a boost of energy or focus, as they were crafted to help you chill and relax. I probably could’ve taken twice the dose of each PLUS gummy product without worrying about losing control, but at the same time, microdosing and using them as intended yielded fantastic results.

These are subtle in psychoactivity, but contain all the right stuff to set you adrift. Once ingested, you’re going on a slow ride to Sleepsville. Though it’s not a thudding crash like you may experience under some heavy indicas. The buzz that one is likely to enjoy from these sleep and relief edibles is of an ethereal and gradual sort. The sour candy equivalent of being rocked to sleep inside a hammock made of stork feathers. That is to say, both the Cloudberry and the Lychee Plus Gummies are some of the best sleep, rest and relaxation edibles available.

Flavor: Good flavor profile. Sweet, but not overpowering. Mild aftertaste. Blueberry flavor is slightly artificial, but nothing out of the ordinary.

High: Relaxing. The blend of THC, CBD, and CBN produce an even, non-drowsy state of being, and can easily be taken in larger doses if need be.