Sensi Chew's Indica 100 Chocolate Caramels have a sweet chocolate flavor and pleasant aftertaste. They usually result in a euphoric head high that pairs well with a movie night, but the onset can be a little jarring. It comes on hard most of the time, but it's gentle and sleepy once it mellows. Take one to help you sleep or to get some extra rest on a weekend afternoon.

Ranked 240 of 321 in Edibles for feeling Euphoric. 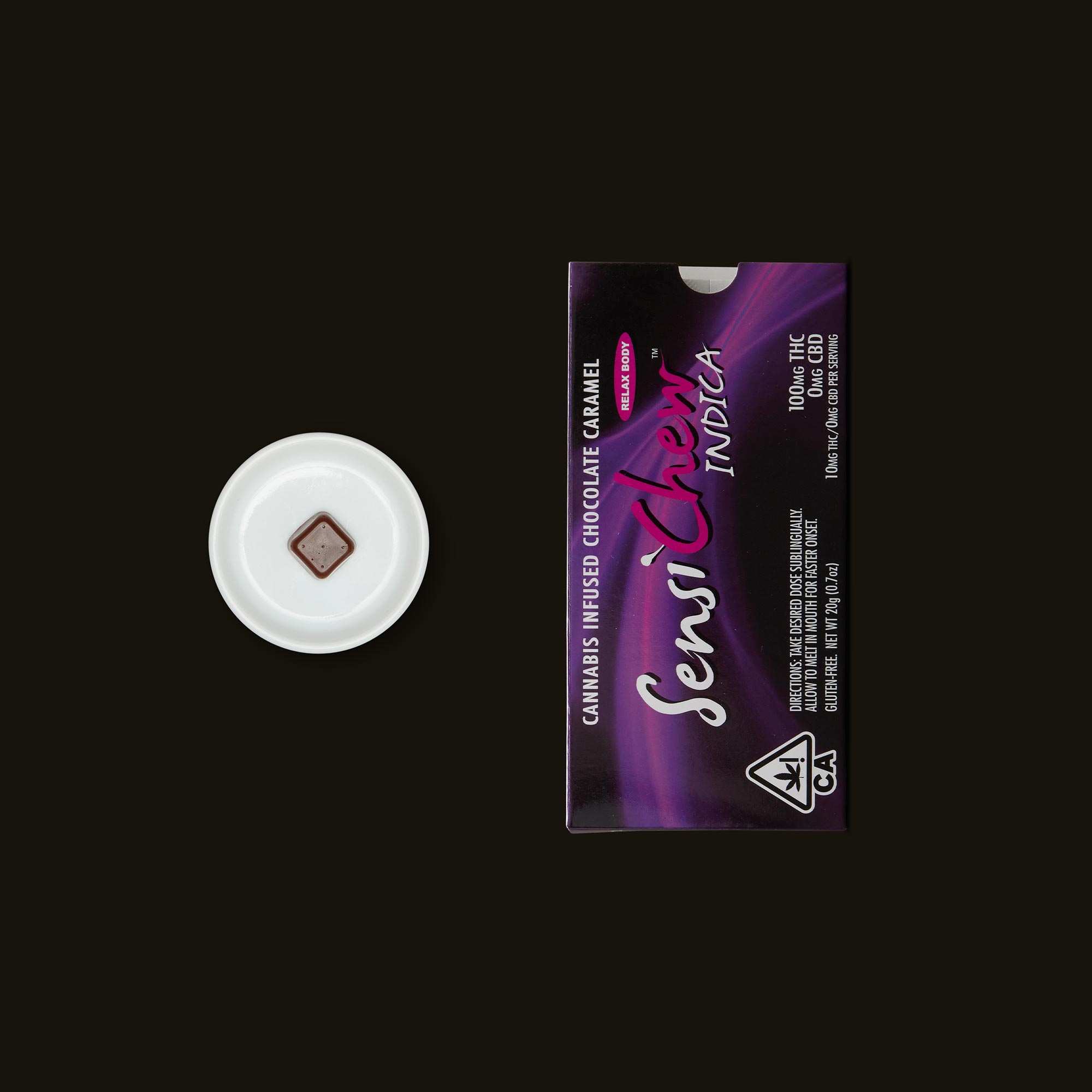 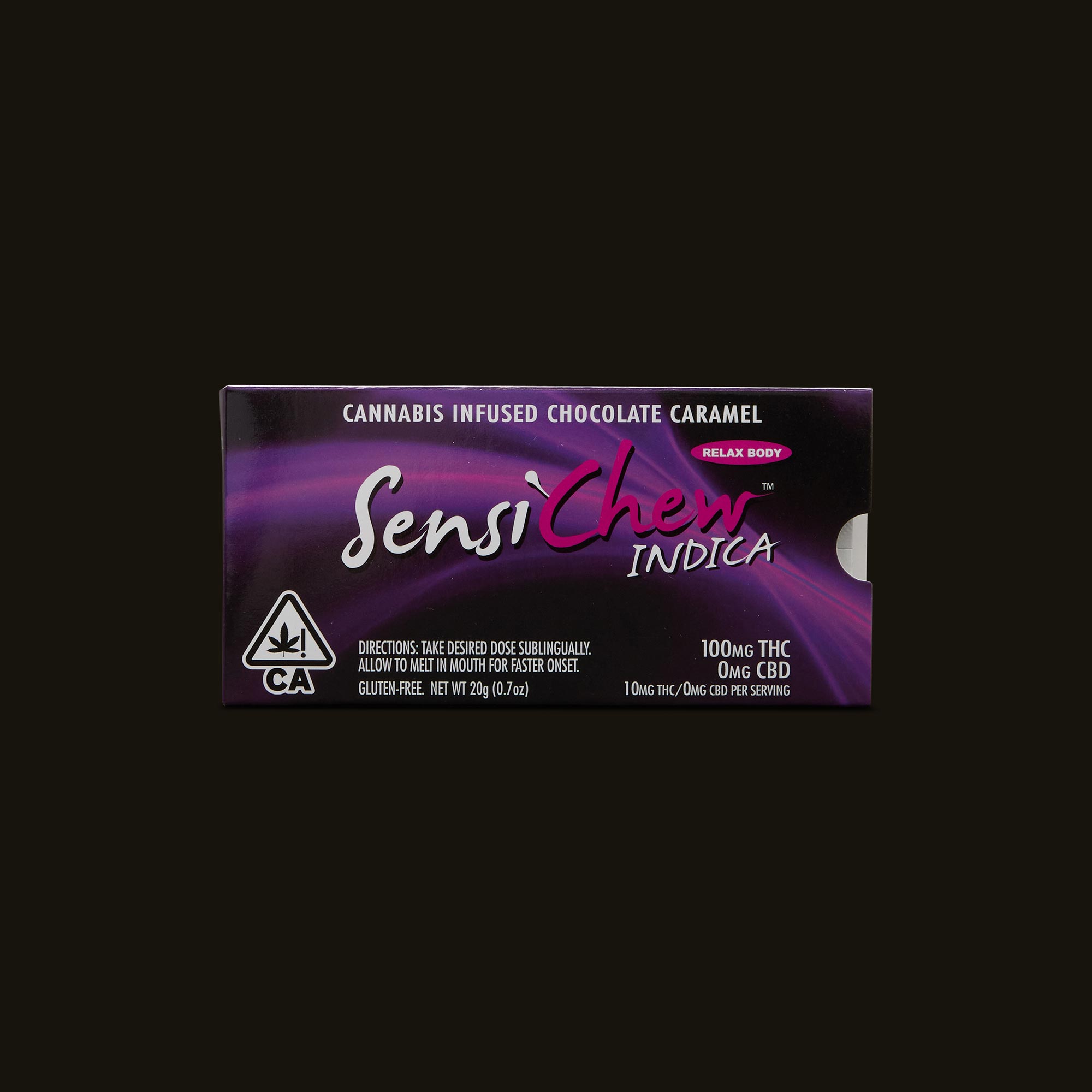 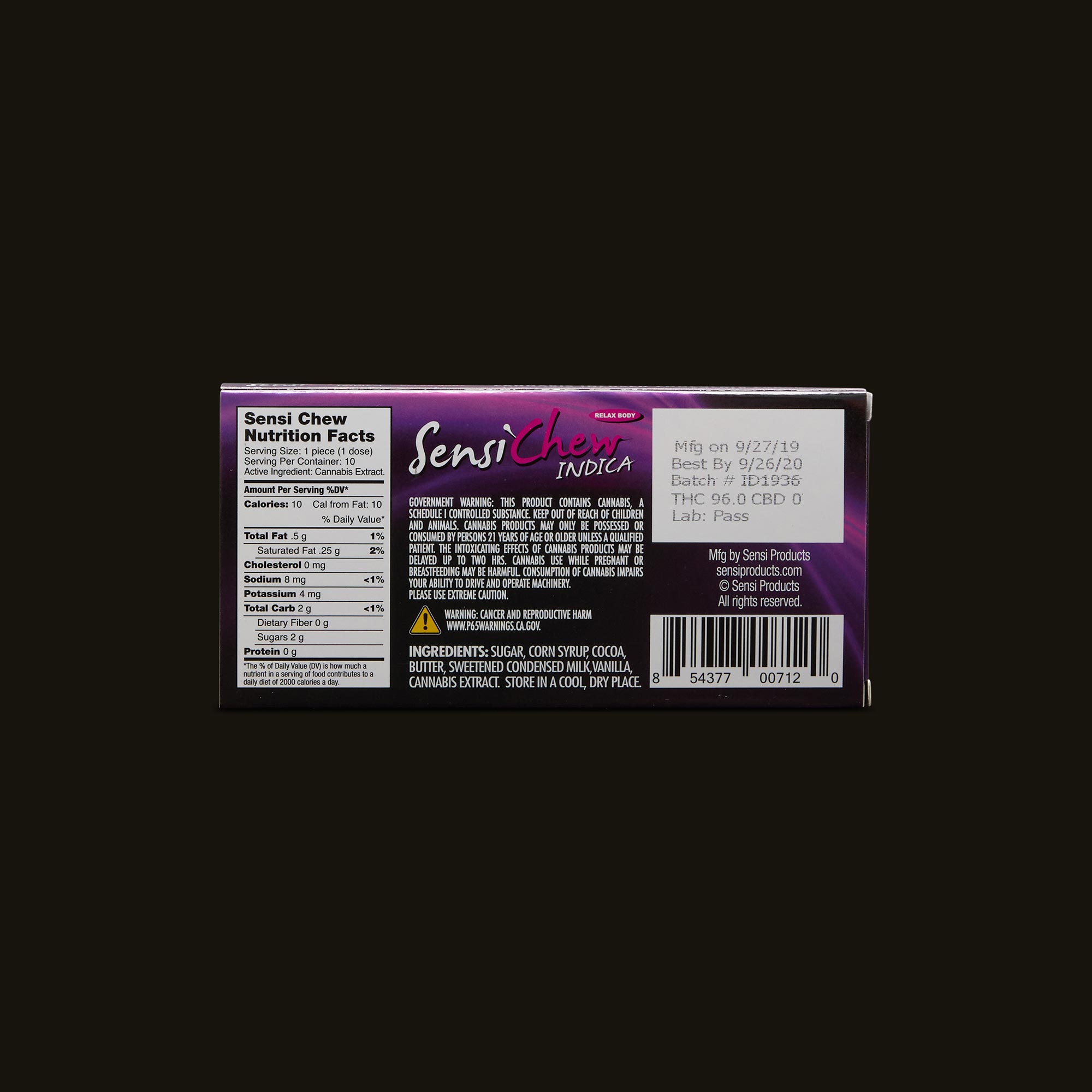 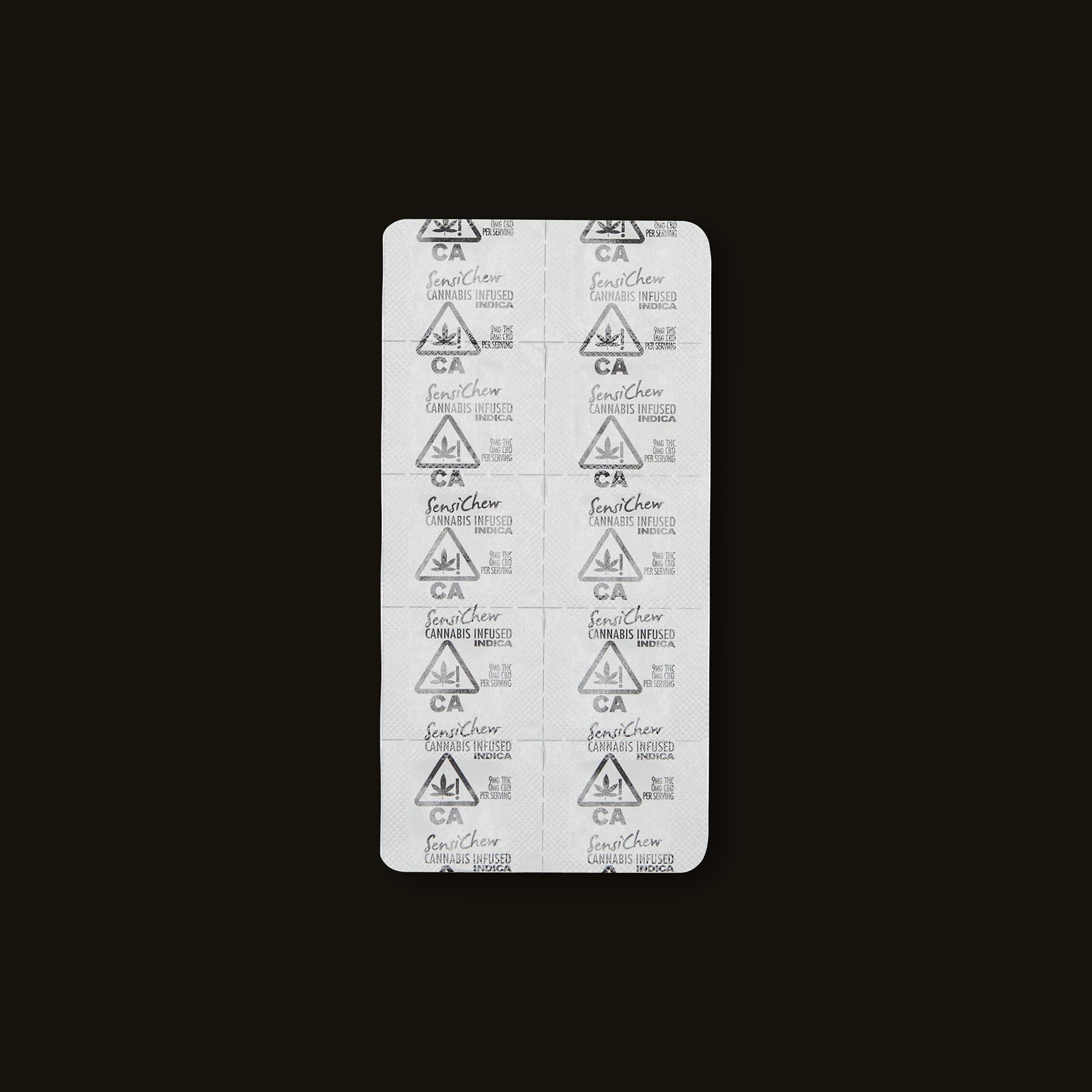 As our committee rates Indica Chocolate Caramel, we capture their experience in real time through our ratings app and report everything back here.

Ranked 240 of 321 in Edibles for feeling Euphoric.

Relax and Rejuvenate with Sensi Chew

Discover harmony, shoot for the moon, or settle for sleep with this sweet treat.

IN REVIEW: Whatever euphoria means to you, these delicate Chocolate Caramels from Sensi Chew will help you achieve it. If you’re overwhelmed they’ll lift you up, and if you’re looking to rest they’ll lay you down. At 10mg THC apiece, beginners may want to share with a friend to avoid going over the top. Expect a noticeable shift from initial onset to the long-game of this high, and pick the activity of your choice and get ready to lean all the way in.

It was 2:30 PM on a quarantined Wednesday. I was naked. I’d in fact agreed to be so for 24 hours. Don’t ask. In spite of these circumstances, I also promised myself I’d be productive. I had a great call with a coach-friend on Monday that brought my dreams into focus. I’d now reached the chunk of time on my calendar designated to a slew of unfulfilled tasks that were supposed to support me in my creative work. So as I finished drafting my email to a heavy-hitting industry person (I call this chasing a “Hollywood mirage”), I decided to expand my mind. The work world was stranger than ever for everyone, so what’d I have to lose by loosening up?

I reached for a Sensi Indica Caramel Chew, which is a square about the size of a gummy and packs in the abandon of 10 mg of THC per piece. With one careful bite the flavor and texture of the chew hit as described: chocolate, caramel, and weed—OK! Although I was hoping for a burst of caramel inside that didn’t come (more like a bonbon), uniform crystals of sugary, creamy flavor and a whole lot of cocoa melted quickly in my mouth. It was less sweet and sticky than a traditional Tootsie Roll, but in a welcomed way. It was softer than expected, and maybe best of all no gunk was left in my teeth. The aftertaste laid on my palate super pleasantly as I wished that I could pass my boyfriend the other half, but rules are rules and it would be there waiting for me.

I’d now see what damage 5mg THC could do. Twenty minutes in and I was engrossed in the conversation my boyfriend was having about heavy machinery. Apparently there’s something on an excavator called a “thumb bucket.” He was chatting away, all business, and his words were getting mixed up in my head as I got lost in creative reworkings and found myself honing in on funnier, more childish iterations. When he hung up, I explained my predicament, and we both laughed our asses off. The dose was light, but boy was I high. I caught myself speaking aloud when I didn't mean to, and even found myself agreeable to things I hadn’t been in the past.

“Doors were opening before my dilated eyes, and a lightness and a sense of reception were following me through the evening.”

My boyfriend and I were both half-working, half-playing and suddenly Wednesday started to have the fun feel of a Friday. My brain was storming, and I was starting to do a million things at once—even keeping up with my turn in virtual chess. Though it was mostly just bright checkerboard squares to my eyes and nonsense to my giddy mind. I wasn’t yet sure what (if anything) I'd accomplish. I’d had a completely unproductive exchange with my boyfriend (our lag times were laughable), and I’d delightfully zoned out on an internet rabbit hole on macronutrients. It wasn’t exactly what I wanted to be doing, but I felt uplifted and inspired. I had yet to see what bandwidth I would have for anything I’d focus on from there on out as my mental processing was definitely on the slow side.

I got to the end of that particular tunnel after about two hours, and I started to talk myself into getting back on track. I got a positive response to my industry email, and then, another ping from an old friend popped up with an incredible job opportunity. Doors were opening before my dilated eyes, and a lightness and a sense of reception were following me through the evening. I was studying things that mattered at a rapid pace and scouring the internet to learn about the new job. I felt powerfully in charge of my destiny, and this strain had me on the rails to reach it.

I was off to the races. I dove right into all the career-building and money-making tasks I’d been putting off for weeks. I was on a mission, and there was no way I was going to curl up and surrender to the indica side of this high. So instead of choosing sleep, or Cesar Millan Dog Whisperer videos, I was cranking out research, replying to emails, and finally checking off every item on several long overdue to-do lists. Hell, I was even making new ones as I triumphantly tossed others in the trash. I was reaching out to other people who scared me, and I was able to push pause on all the nasty, mucky thoughts around the dread and tedium of this unpaid work. The Sensi Chew had motored up my spirits, and I chose to keep them moving.

“I struck gold in the form of caramel and major productivity.”

Five hours in and this high wouldn’t quit, and neither would I. I struck gold in the form of caramel and major productivity. For instance, I realized I definitely needed one thing (paid excitement) to prop up the other (artistic excitement), but oh how easily they could share in the fun together! Putting things out into the world while still choosing to be naked made me feel like I was in charge of everything, and my confidence was at an all time high as this newfound power entirely shifted my course.

I’d never been so effective on weed, even on strains where my head feels a bit more clear. I felt motivated by how at ease I was and eased by how motivated I was. This edible emanates harmony. But for each new task I was inspired to do, I completely forgot where I’d left the other one off, and my train car was beginning to spin in circles. Still, I felt completely rejuvenated. Even as time jumped between dropped tasks, I seemed to be capitalizing on small successes. It was almost like my high had a second wind, and like a mechanical doll I was wound up and ready for more action.

My boyfriend was lost in a documentary, and that led to a new TV show binge that was at least 4 hours long. We’d been on totally separate planets the whole time, completely absorbed in our own focus tunnels. But we were still vibing and enjoyed each other’s nearby energy in our small quarters. By hour seven my gears finally slowed, and I felt I could have easily called it a night. At no point in my high did I feel let down, even when I came down, and it never felt like the weed had more say in my behaviors than I did. The head rush I achieved with these yummy chews left me free of nagging worries and in total control of my activities. I can only hope achieving these newfound goals plays out as well as my experience with this delectable edible.

Be the first to review Indica Chocolate Caramel from Sensi Chew and help others find their high.