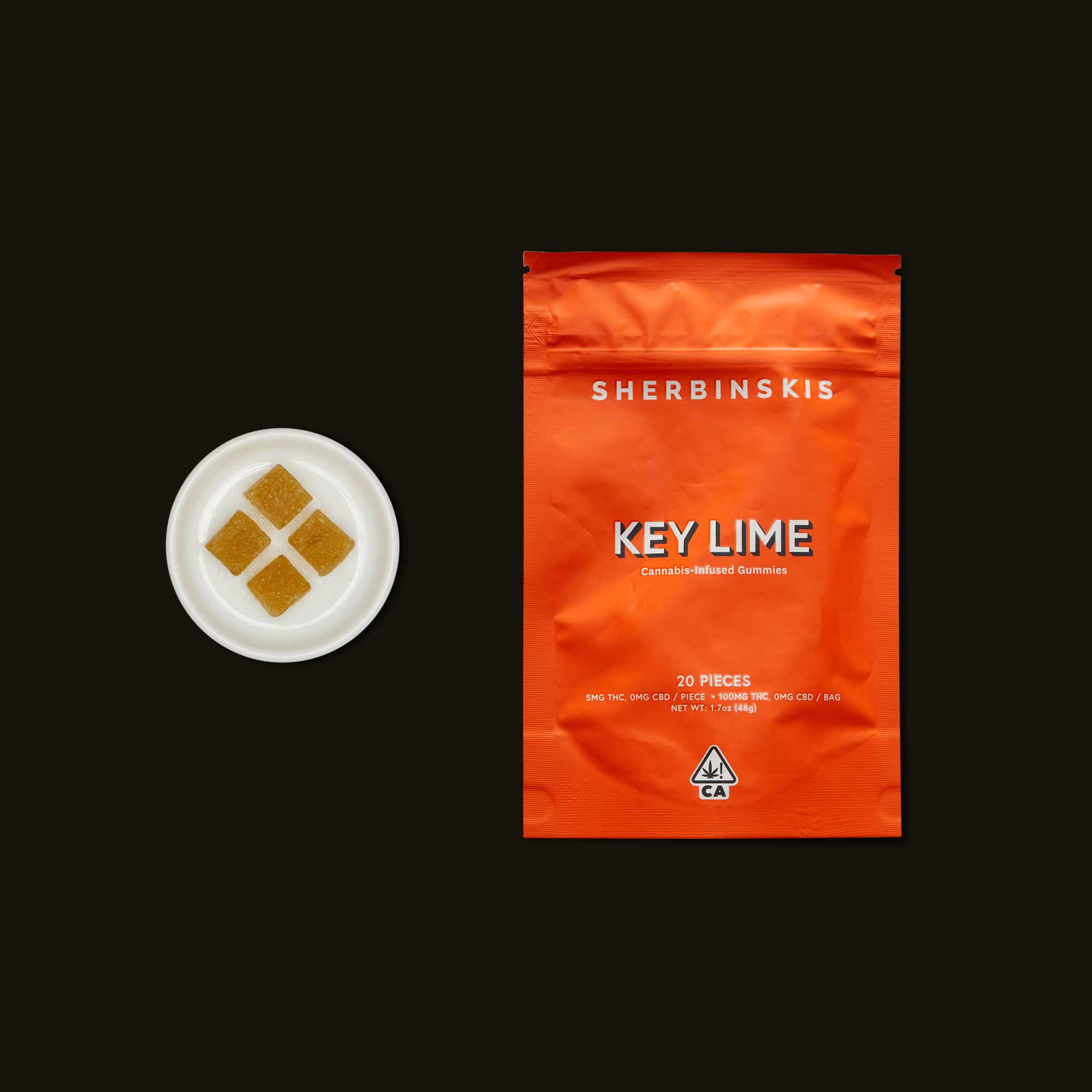 Sherbinskis’ Key Lime Gummies are sweet-and-sour edibles with a delightfully chewy texture. The resulting high is often uplifting and head-heavy with a relaxing body buzz to complement. The comedown often ends on a sleepy note, so take this in the late afternoon and ride it right into the evening.

Ranked 106 of 266 in Edibles for feeling Euphoric. 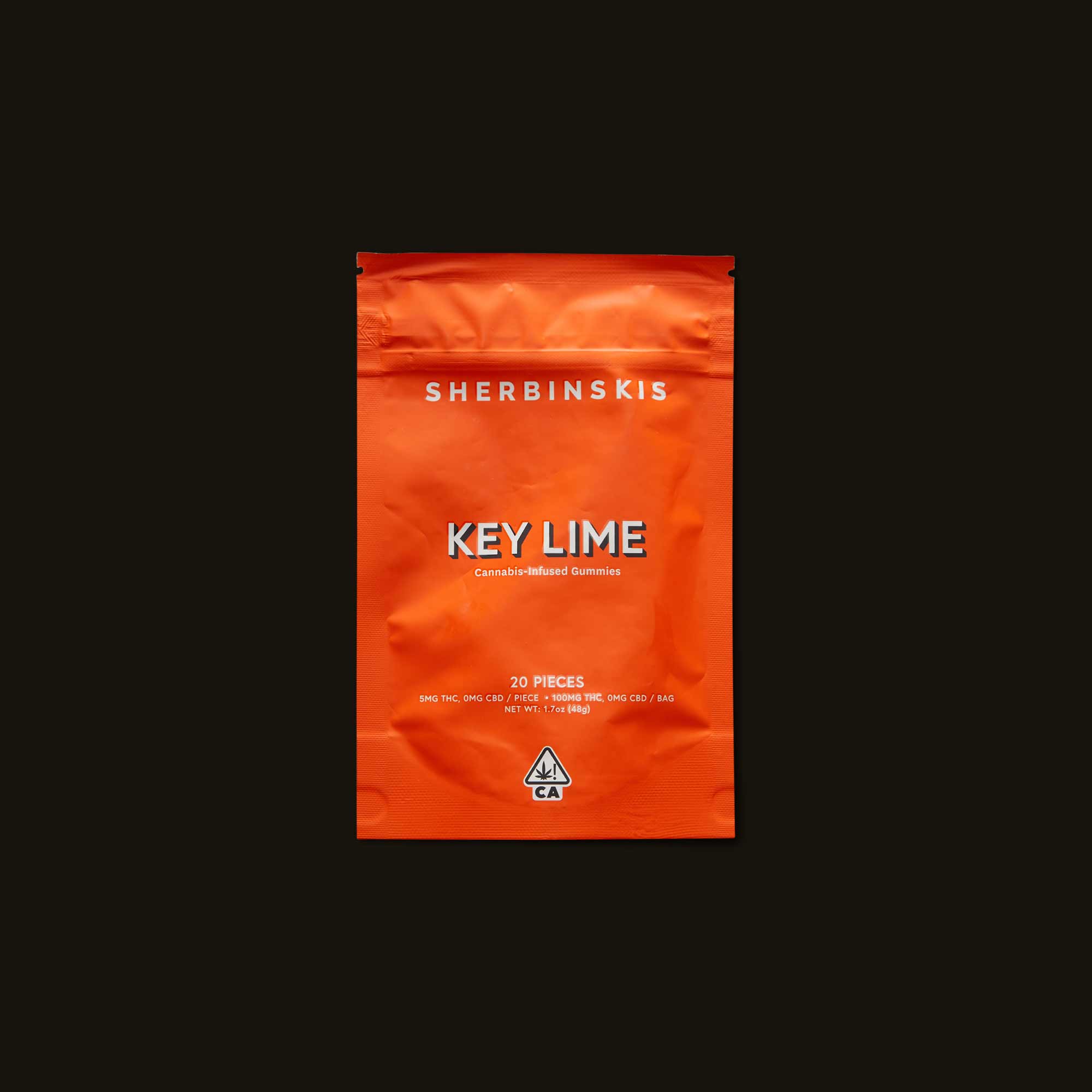 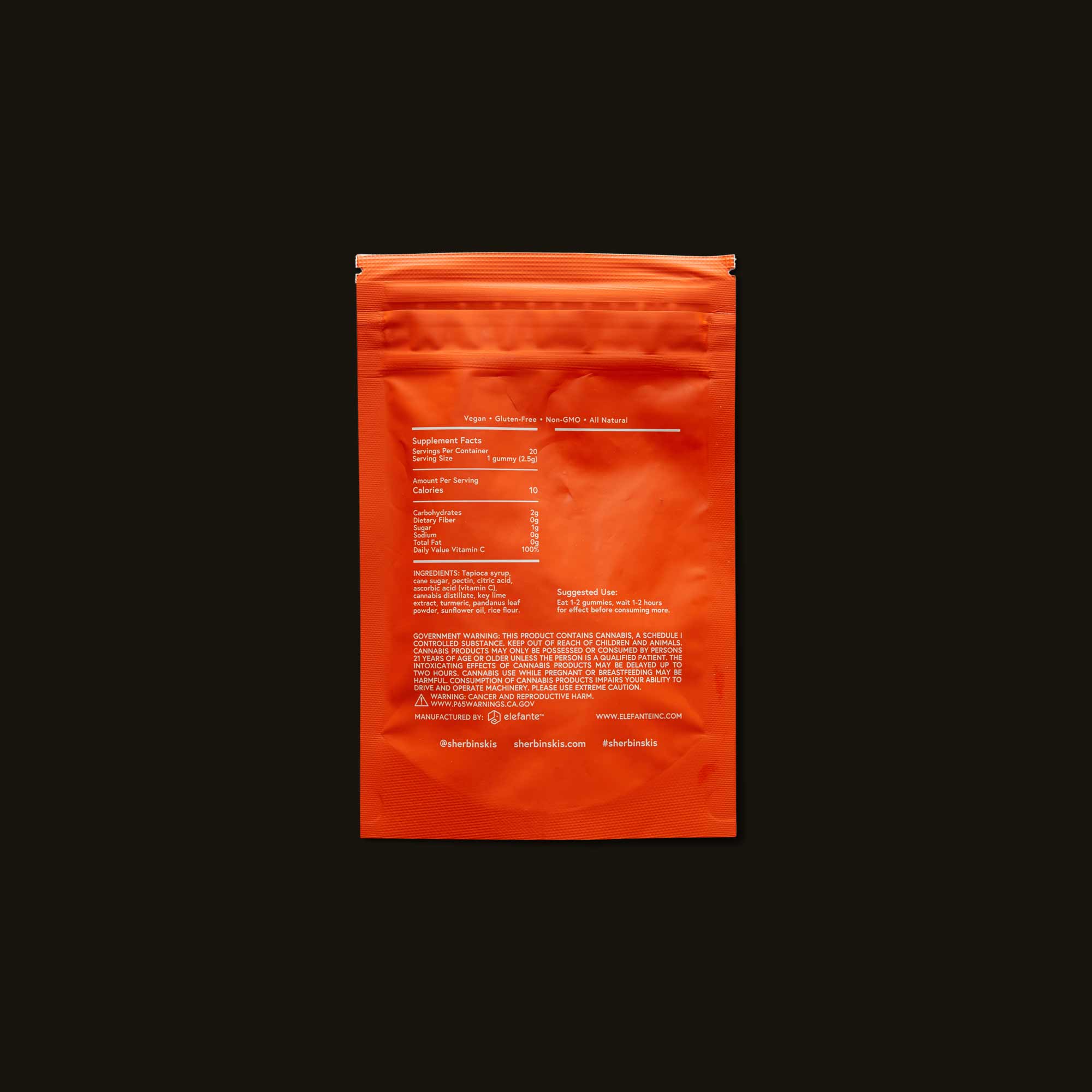 As our committee rates Key Lime Gummies, we capture their experience in real time through our ratings app and report everything back here.

Ranked 106 of 266 in Edibles for feeling Euphoric.

A very smooth and clear-headed high and has me feeling downright happy. The light coming through my bedroom window feels like a warm bath right now.

Best within 1 year of manufacture date

Flavors like watermelon and key lime add zest to these indica edibles.

IN REVIEW: All three of these gummies reviewed by Luca provide welcoming flavors and a dosable, controllable high coming in at 5 mg of THC per edible. You’ll find a pretty straightforward foray into the indica world no matter which variant has your mouth watering, and they’re suitable for cannabis consumers at every level.

The taste of Sherbinnskis' indica gummies are distinct and top notch. With varieties like Key Lime, L’Orange, and Watermelon, I was impressed by how they managed to capture the essential profiles of each flavor. While the Watermelon reminded me of the Sour Patch candy I loved as a kid—and still do as an adult—the Key Lime felt elevated, like a higher end pastry rather than a run-of-the-mill diner dessert.

I'll admit that I don’t normally consume indica edibles in the morning because I tend to prefer a more energetic offering, but I wanted to try all three flavors in one day and give each of them ample time.

After a light breakfast, I skipped the OJ for a 5 mg L’Orange gummy. Within about 45 minutes, I could feel a softening of my environment, like some inner voice was reminding me to slow down and become more aware of my surroundings. It was the exact effect I would expect from a quality microdose. There was a general sense of well-being without it calling attention to itself. The Sherbinskis L’Orange was a subtle facilitator of mindfulness during what turned out to be a hectic morning. It helped me carve out a deep 10-minute meditation, allowing me to take my hand off the clutch.

“I was the Grand Marshall of some Cannabis Day parade, waving to old friends from the back of a slow-moving convertible.”

Then, after a heartier lunch, I decided to up the ante a bit and eat two of the Watermelon gummies. The onset was similar, also coming in at the 45 minute mark, and with 10 mg as my usual max dose I was now firmly in the grips of a deeper and more insightful high. My mind started to spin like a game show prize wheel, and after some deep breathing, I was able to land on “yoga.” The moment moved me and I opened a yoga video on YouTube, with a sunny Australian cuing up positions way above my skill level. Still, I gave it my all, aided by a high that had me believing in my flexibility.

The post-workout feeling, showering and ultimately laying in bed made it all worth it. The relaxation was total and complete, and it made me wish I still had those rainforest sounds CD’s I had growing up. This high was taking me down memory lane, like I was the Grand Marshall of some Cannabis Day parade, waving to old friends from the back of a slow-moving convertible. The overwhelming sensation was a mix of nostalgia and euphoria, without ever making me feel sedated or dragged down.

By the time the Watermelon high faded, I was left with a ravenous appetite that was quickly conquered thanks to a heaping bowl of bowtie pasta from a local Italian restaurant. After finishing some complimentary tiramisu, I took two more 5 mg gummies, Key Lime this time. I didn’t have to wait long at all for the first sensations to hit. It came on like a light head buzz and sustained the peak effect for longer than the others, but that could be attributed to it being my fifth gummy of the day. This was a welcome high, as it swept me to the couch and washed away whatever petty concerns I may have been harboring.

“It took a lot of inner strength to get up off the couch and into my bed, but once I did I was fast asleep.”

It was a great stress reliever, delicious like the other two flavors, and succeeded in targeting my muscle pains. After losing myself in a Netflix documentary for the night, my eyelids soon became drawbridges. It took a lot of inner strength to get up off the couch and into my bed, but once I did I was fast asleep. I woke up in the morning fully refreshed, unable to recall the last time I logged a solid eight hours of sleep.

Each of the Sherbinskis gummies worked well with each other, and I had no ill stomach effects with any of the meals I consumed. It actually helped mitigate some aches and pains I’d been having, and as a sleep aid specifically, the Key Lime knocked me out. This “edible fruit bowl” from Sherbinskis was the sort of self-care Sunday I never knew I needed.

I take one in the evening to start to wind down and carry me to dreamland. Mild high that leaves you clear but just relaxed enough to doze off. Without these I'm unable to sleep through the night. With these, I stay asleep and wake up easily - refreshed and ready to go.