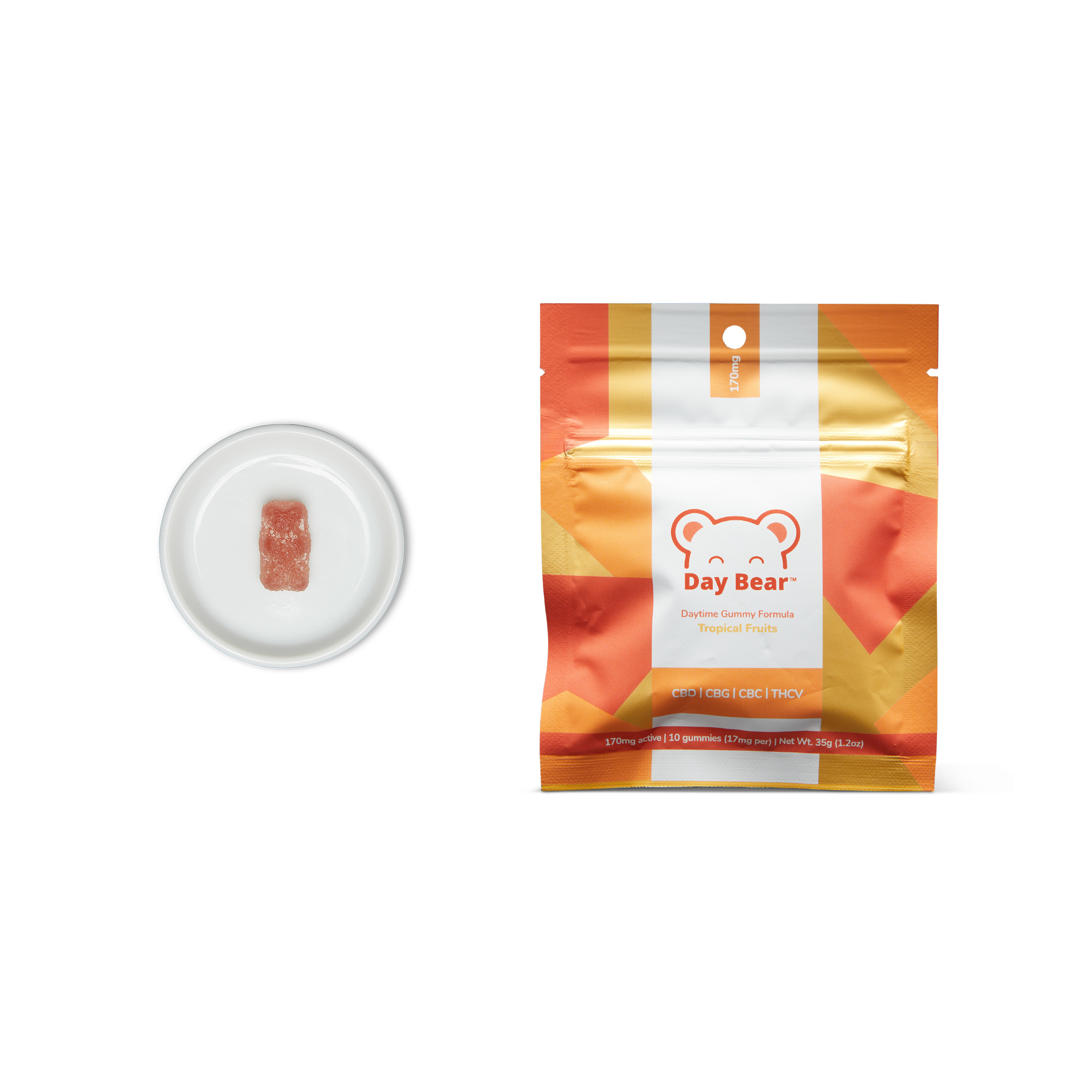 As our committee rates Day Bear - Day Time Gummies (CBD/CBG/CBC/THCV), we capture their experience in real time through our ratings app and report everything back here.

Sleepy Bear’s Day Bear defies its name and delivers a jolt of energy to any adventure.

IN REVIEW: Sleepy Bear's Day Bar is as tasty as it is effective, and it delivers a host of cannabinoids like CBD, CBG, CBC and THCV for an entourage effect that will keep you upbeat and on track. A nano-hemp blend packed with tropical fruit flavor that’s perfect for the cannacurious, you can expect a pleasing mouthfeel and aftertaste that will surely have you coming back for more. The psychoactive-free high is recommended for everything from mood management and focus to running errands, meaning keeping these handy will ensure you’re always a bite away from a more productive day.

These tasty little gummy bears will take you for a spirited ride that’s free from anxiety. Containing several cannabinoids known for anti-inflammation and overall wellness, Sleepy Bear delivers a healing confectionery that you can sample freely without the fear of getting too high. Each tropical fruit flavored gummy contains 2mg of THCV, and like the other cannabinoids found in this edible, it doesn’t necessarily get you high. One would have to ingest a lot for that. I had the whole bag and did not feel any of the telltale signs of being stoned. THCV is also known for its appetite suppressing properties, and the only thing I can say about that is it did not prevent me from eating a few fish tacos and a Wetzel Pretzel.

“I finished the bag before the opening credits started.”

Sleepy Bear’s Day Bear also contains 5mgs of CBG, CBD, and CBC to round out an effective entourage effect. The anti-inflammatory properties found in each gummy gives the overall effect of these cannabinoids a general sense of well being coupled with a positive outlook. It was a nice way to take the edge off while maintaining control. I popped a couple for the two-mile walk to my local mall. I decided to go to the movie theater by myself and watch Dune. I hadn’t been to the movies in a long time, and this calming “buzz” was the perfect companion to a big budget sci-fi flick that didn’t disappoint. Normally I’d opt for some Sour Patch Kids as a movie time snack, but these gummies made a nice substitute. I finished the bag before the opening credits started, and I was none the worse for wear by the time I got out. To the contrary, I was brimming with excitement and wonder and decided to walk around the

I stopped by the only book store in the mall and basically cruised the aisles looking for nothing in particular. I found that this high is the perfect way to just put yourself in neutral and let the wind carry you. Its claims are extensive: It purports to aid in focus and general wellness, and I found those to be true. I also felt an increase in my energy levels, but due to its non-psychoactivity, I felt little to no euphoria. These would make a nice substitute for that morning coffee or pre-workout snack when you need an added “oomph.”

“A nice substitute for that morning coffee or pre-workout snack when you need an added “oomph.””

It is recommended you take 1-3 gummies during an entire day, so if you are new to edibles, don’t be like me and finish the entire bag during the trailers of a movie. These tropical fruit Daytime formula gummies are vegan, gluten-free, THC-free and fast-acting. I counted 15 minutes before I felt a subtle veneer of wakefulness take hold. While I didn’t become a productivity machine or complete an Ironman Triathlon after ingesting these gummies, they’re still a worthwhile and risk-free way to inject a bit of focus and clarity into one’s day. Oh, and they taste damn good too.

Be the first to review Day Bear - Day Time Gummies (CBD/CBG/CBC/THCV) from Sleepy Bear and help others find their high.