Ranked 59 of 295 in Edibles for feeling Euphoric. 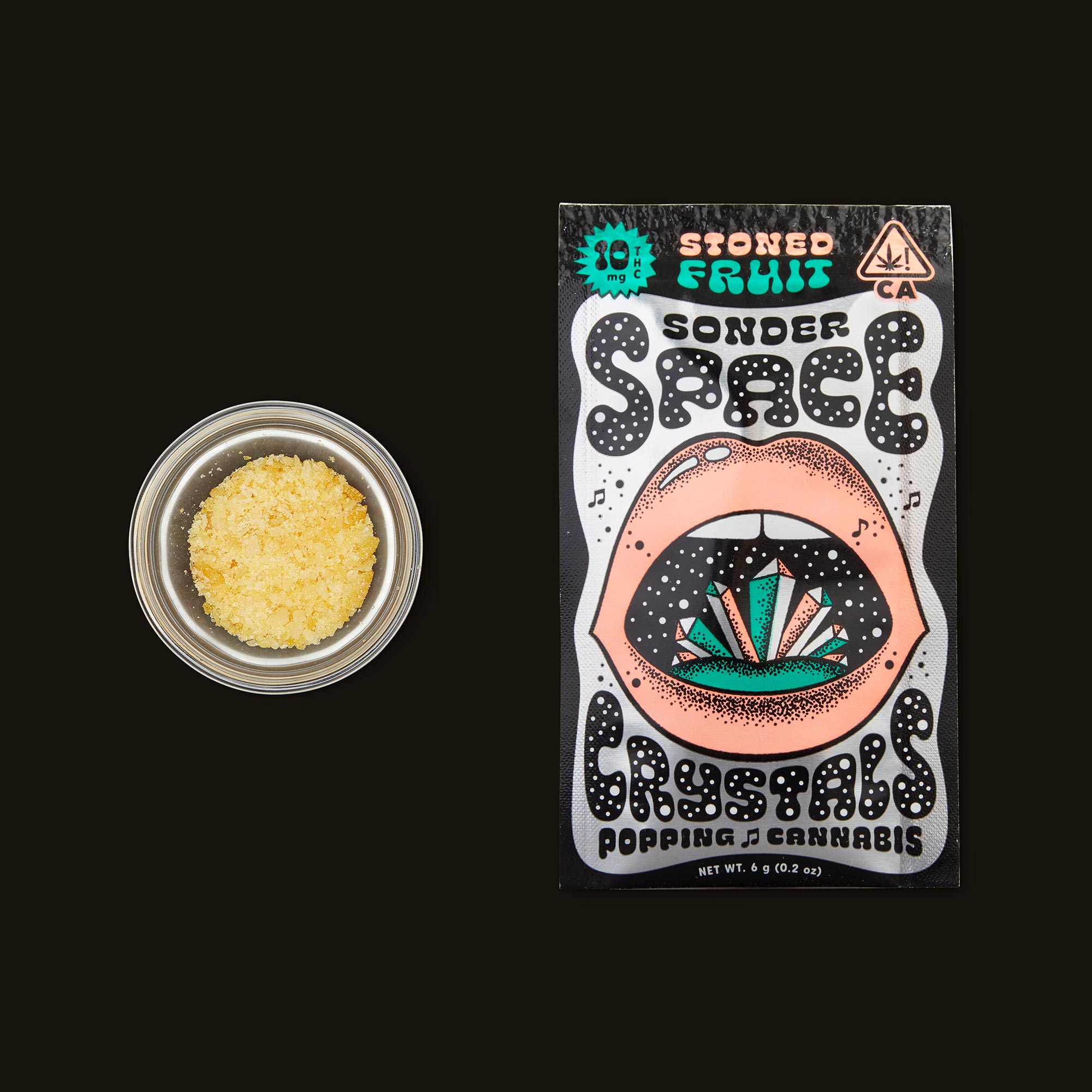 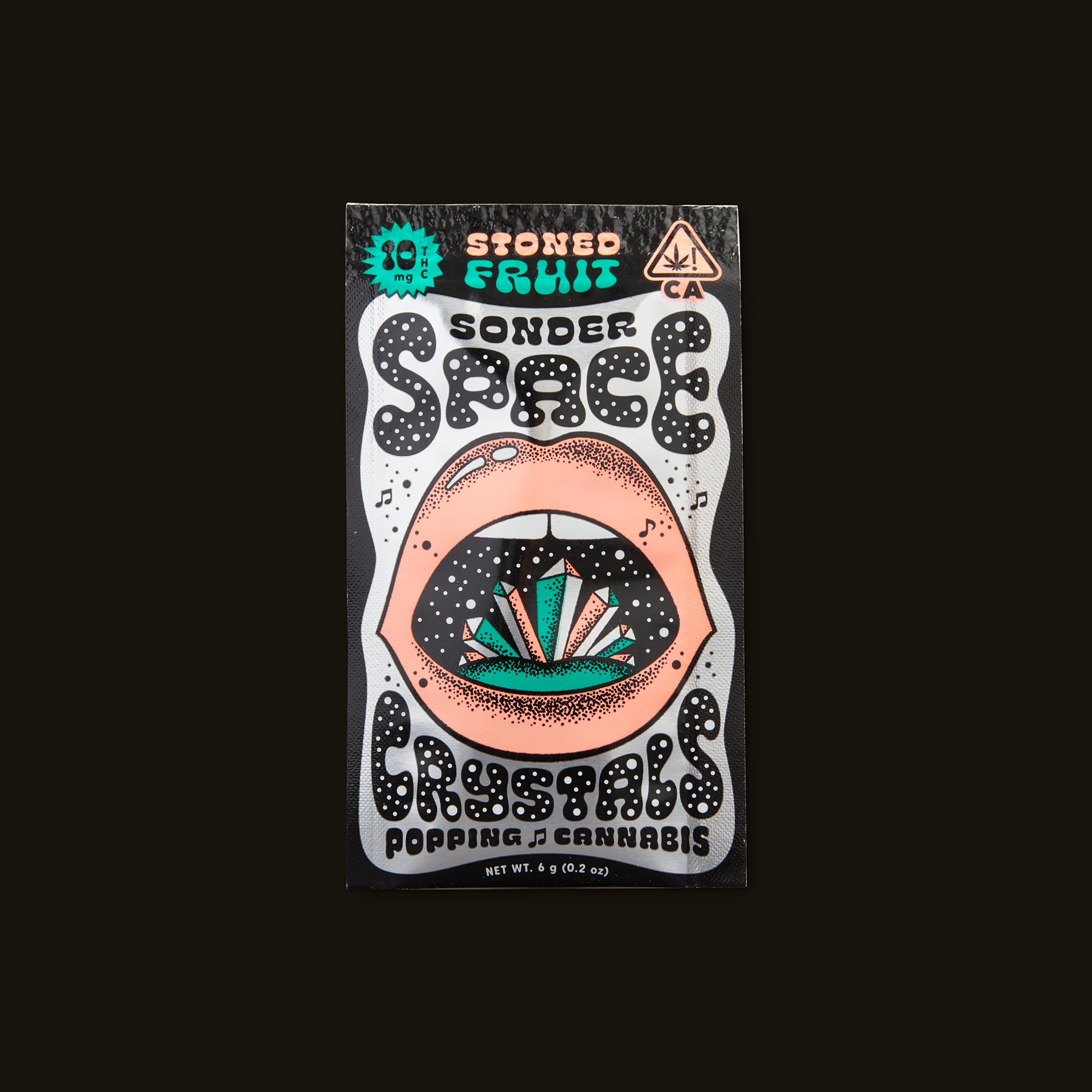 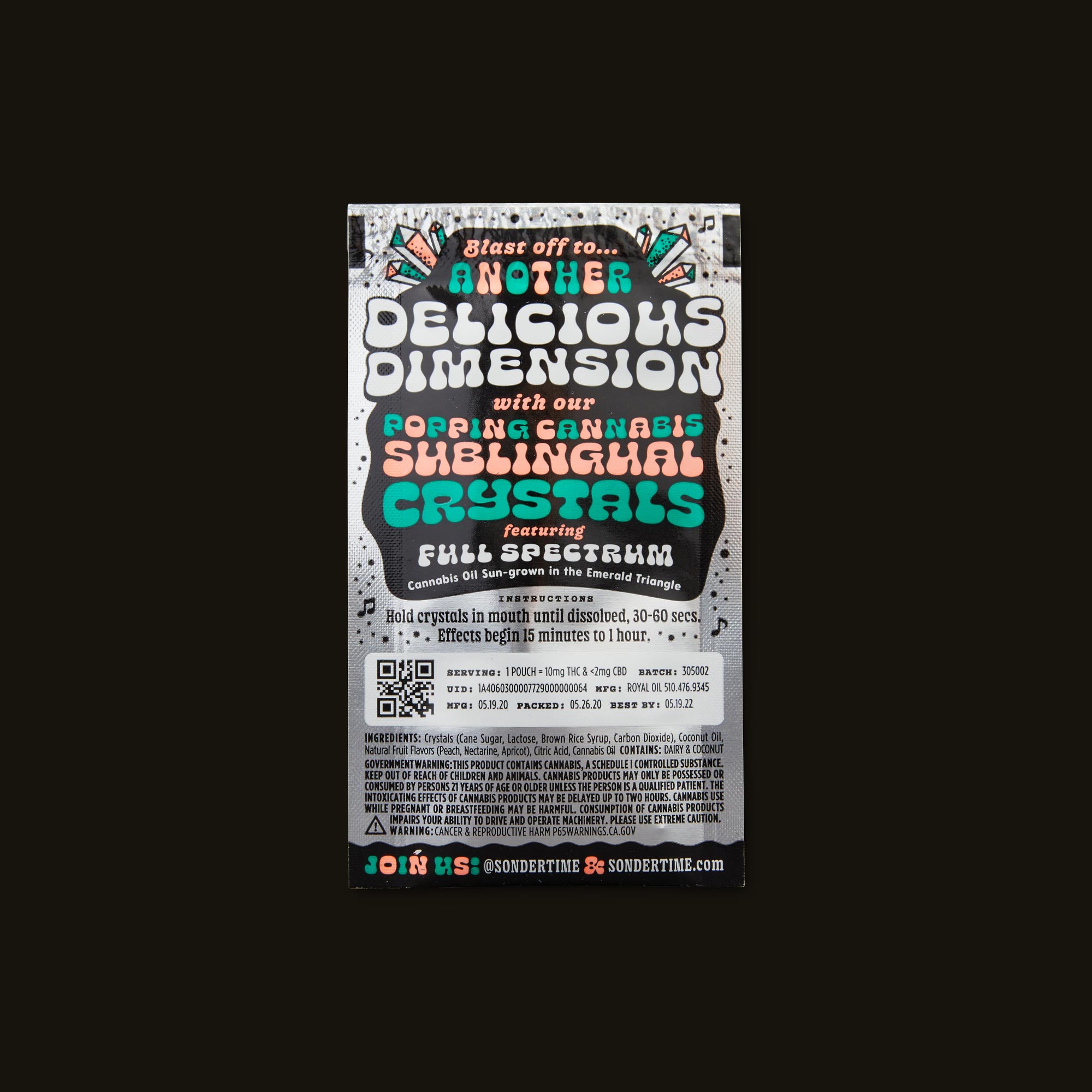 As our committee rates Stoned Fruit Space Crystals, we capture their experience in real time through our ratings app and report everything back here.

Ranked 59 of 295 in Edibles for feeling Euphoric.

These crystalized candies are a nice morning pick me up. I don't normally make it a habit to eat candy at 9 in the morning but I'm glad I did. I'm feeling focused and relaxed.

Best within 2 years of manufacture

This sweet and fruity treat might just bend the space-time continuum, offering old-school vibes in a newfound high.

IN REVIEW: Sonder turned Pop Rocks into Pot Rocks with this uplifting and unique edible experience. The fruity flavor hits quickly before the real show begins, as a symphony of popping will dance across your tongue to leave you feeling like a kid again. Expect a happy and moderately heavy head high that provides a focusing mood boost. A healthy body buzz and euphoria will soon follow, but the effects are approachable and great for consumers at any tolerance level.

Throughout this lengthy lockdown, nostalgia has been frequently referenced as a way to escape the present. From music and movies to hobbies and time-honored interests, so many of us are reacquainting ourselves with what’s comforting and familiar. And as I sat thinking about my renewed love of rollerblading while looking at a stack of Pokémon card booster packs, with the intention of opening a few while I watched Sailor Moon later in the night, I was acutely aware that I’m no exception. Which explains why I instantly fell head over heels for Sonder’s Stoned Fruit Space Crystals. A blast from the past, but with just enough modernity to make it so much better.

Upon looking at the packaging, the first thought that popped into my head was, “Wow, am I the target market for this.” The illustrated metallic, spacy design and playful typography grabbed my attention and sparked my curiosity. It’s the kind of product I want to pick up and learn more about. And, having tried it, I’d add that the design does a pretty good job of encapsulating the actual experience of consuming these animated little crystals. Speaking of eating them, after delighting in the package design, it was time to devour. Much to my boyfriend’s chagrin, I’m not usually much of a candy person. I certainly have a sweet tooth, but the impossible-to-pronounce artificial ingredients found in most popular candy are simply not my jam. Lucky for me, they appear to not be Sonder’s jam either. The back label informed me that the sublingual Space Crystals are made from a handful of familiar ingredients. Fantastic.

“I felt relaxed yet focused, like I could easily continue cooking, or just as happily kick it on the couch.”

Just as I’d done countless times as a child with too many packs of Pop Rocks, I tilted the bag into my mouth and poured a small pile of explosive crystals onto my tongue. It was hard not to grin because the whole experience brought me back to being a carefree kid. Honestly, it’s the most fun I’ve had consuming an edible. The flavors that filled my mouth were not that of an overly-processed, mass-produced candy. They provided a pleasantly surprising, nuanced bouquet of fruity and sweet flavors, peaches and passionfruit in particular. I sat back enjoying the popping sensation and sound effects. The phrase “musical marijuana” came to mind. I promise to stop waxing poetic, but something I found to be a really pleasant treat worth noting was the amount of crystals in the pack. There’s enough to have a few mouthfuls, which meant enjoying the flavor and experience a few times before finishing the pack.

Now let’s talk about the actual high. It took a little over an hour to properly kick in. It started off as a relatively mild head high with minimal physical effects. There was a light euphoria that settled in, but I still felt clear headed enough to focus on what I was doing (which at the time was cooking). There was a definite mood boost too, cheerful energy all around. I felt relaxed yet focused, like I could easily continue cooking, or just as happily kick it on the couch.

After a little more time passed, the high started to get a little bit stronger. The cheerfulness evolved into a perky playfulness, which made it perfect for banter with my boyfriend. I could also definitely see this being a fun pairing for a trip to an amusement park. In addition to the sunny disposition, the high also developed a similar sense of nostalgia to the taste and experience of actually eating it. It’s kind of hard to describe because I didn’t smoke weed as a kid, but something about the feeling it gave me, and the headspace it put me in, reminded me of childhood wonder.

“It was like I was suddenly sitting on the floor of my childhood room, swirling with a youthful euphoria.”

It was like I was suddenly sitting on the floor of my childhood room, swirling with a youthful euphoria. I found myself craving a dose of Sailor Moon (which I promptly put on), and I was tempted to pull out my full collection of Pokémon cards. I wanted to lay them all out and organize them in different ways, which in itself is a really good explanation of the effect the high had on me; nostalgic happiness mixed with just enough focus to be productive. I was also eyeballing my beloved N64, and was tempted to fire up a classic. The body high had also finally kicked in, and I felt a soothing sensation that left me relaxed, but not tired.

Eventually, I found myself wishing deeply that I had a second pack. If you have a higher tolerance, these effervescent crystals might start to wear off a little sooner than you’d like, though this in no way diminishes the overall experience. I’d just encourage you to have a second pack at the ready if you wanna keep the good vibes going. The body high was the last to arrive, and first to leave, while the good mood and playful energy hung around a little while longer. I eventually did start sifting through a stack of Pokémon cards, until the high finally wore off altogether, and it was time to head to bed.

After all was said and done, I’d easily give Sonder’s Stoned Fruit Space Crystals five stars. From the design to the taste to the high itself, they’re packed with playful fun and a comforting sense of nostalgia, while feeling just fresh enough. So next time you’re in the mood to bend the space-time continuum and get in touch with your younger self, pick up a pack of Space Crystals, and enjoy that delightful frenzy of tiny mouth explosions, and sweet, peachy goodness.

Be the first to review Stoned Fruit Space Crystals from Sonder and help others find their high.