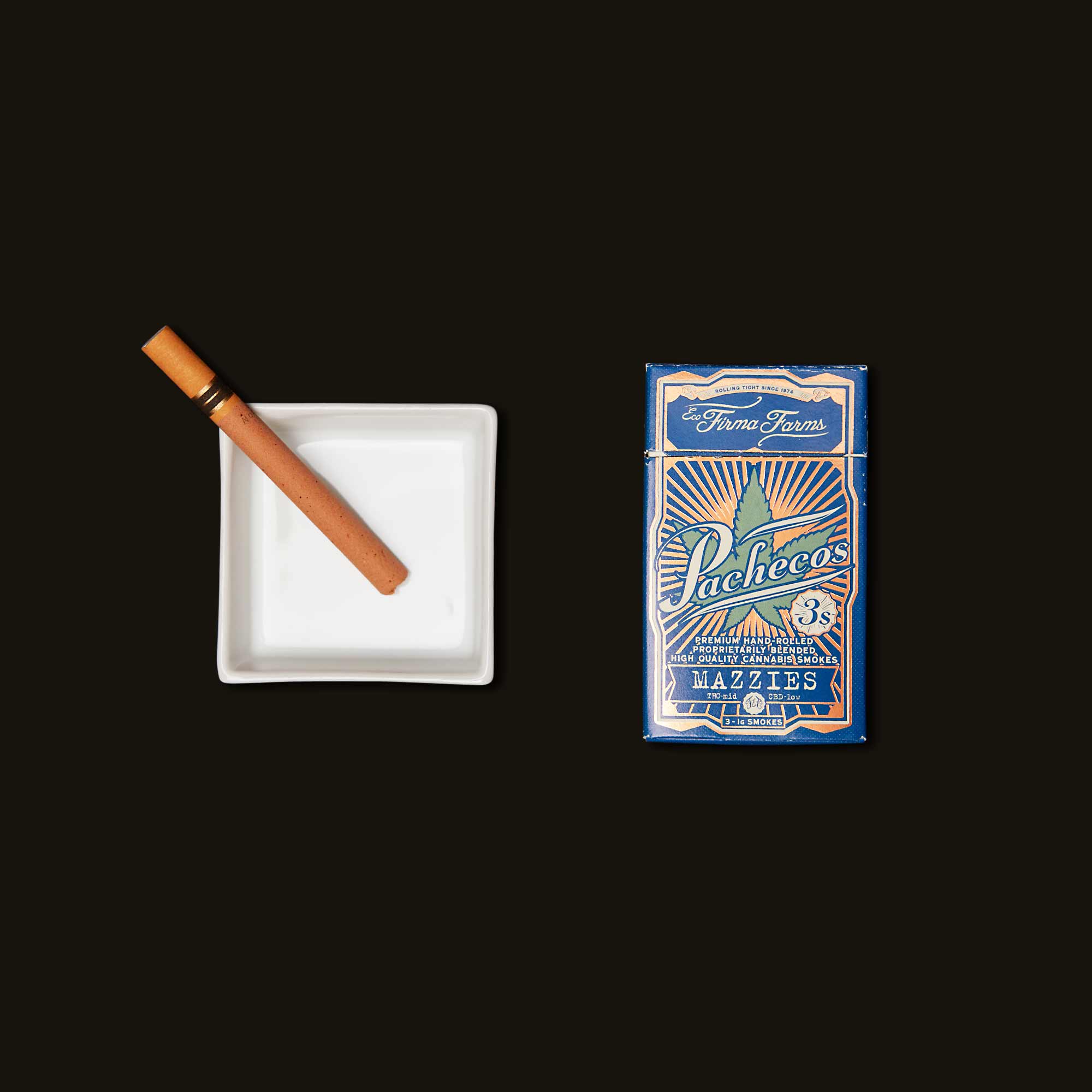 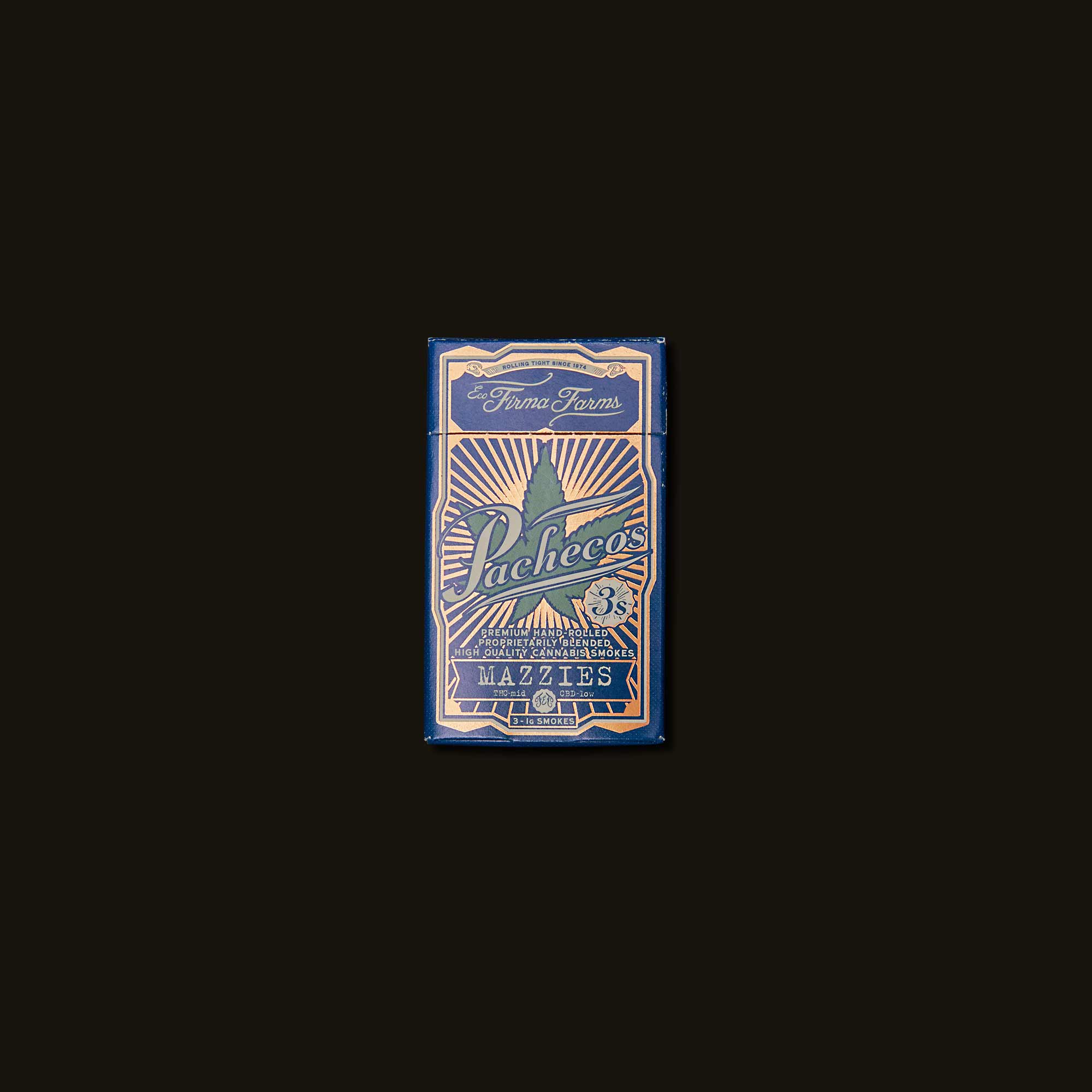 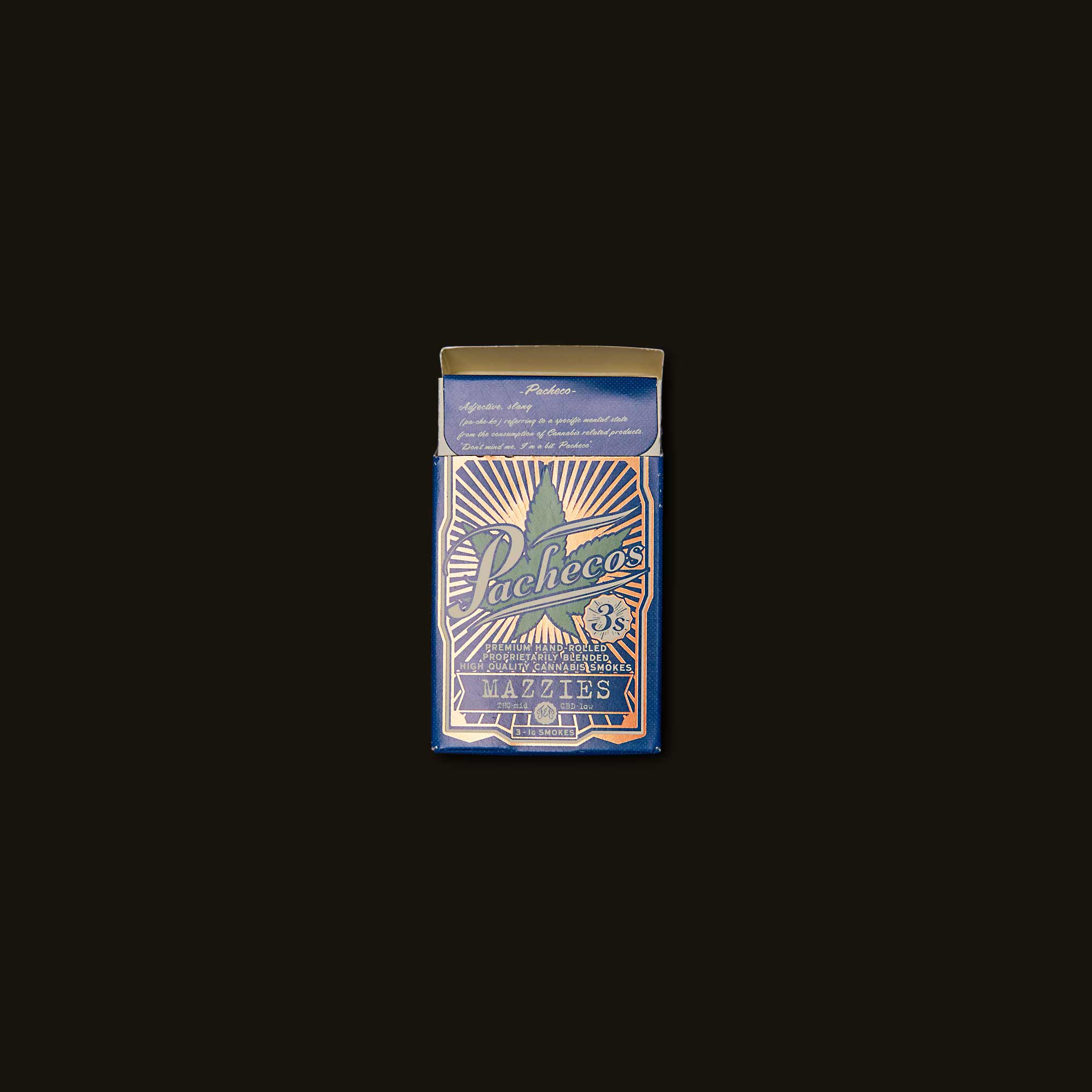 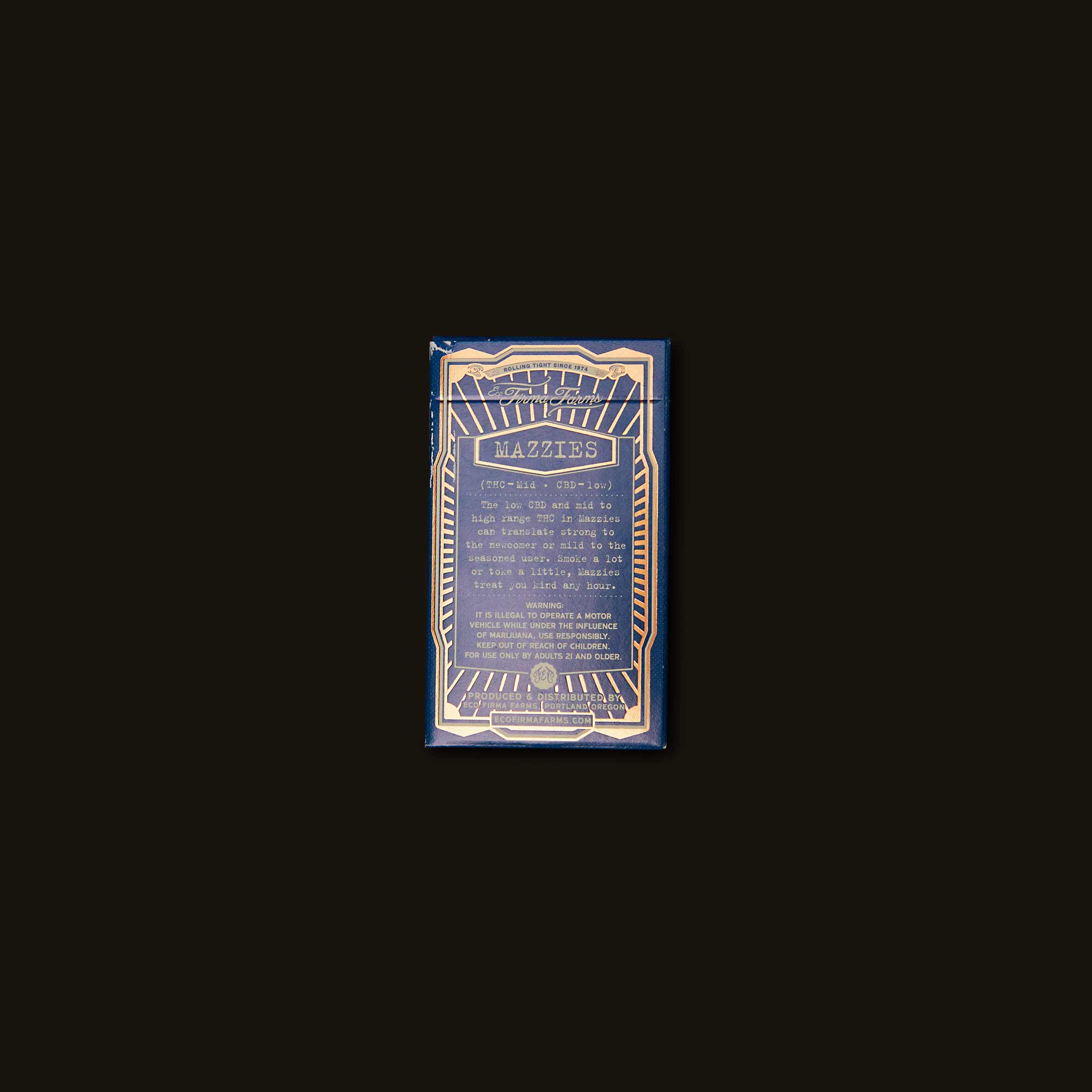 As our committee rates Mazzy Pachecos, we capture their experience in real time through our ratings app and report everything back here.

All The Cool And None Of The Cancer

Who needs a cig when you've got these wonder sticks?

I used to smoke cigarettes, but I don't anymore. Save your applause. I know smoking cigarettes is tantamount to slow suicide, but when hanging from the lips of an attractive young adult, I still just think they look so cool. And while I can often be spotted around town with a fat joint or blunt hanging from my own mouth, it’s just not the same. I miss the feel of the dense, fibrous filter, the neat, cylindrical paper, and the telltale plume of vaporous tobacco smoke. I miss the feeling of a ciggie between my index and middle fingers as I gesticulate through a story, but most of all I miss how cool I thought I looked. Eco Firma Farms’ Pachecos are about to change all of that for me, and I may never want for a stank suicide stick again.

“It was the cure for cigarettes and exactly the antidote to cool-kid withdrawal that I needed.”

I gasped hard when I shook the first of my Pachecos from its container. Here was, for all intents and purposes, a cigarette doppelgänger. The paper had the rich beige hue of a limited edition Nat Sherman; it looked like it should be paired with a straw fedora, a Spanish guitar, and the entire Buena Vista Social Club. It was old jazz, it was new money, it was a cool kid cigarette if I’d ever seen one. But it was not a cigarette; it was the cure for cigarettes and exactly the antidote to cool-kid withdrawal that I needed.

The fragrance was a classically skunky, pungent funk layered with fruity, floral, and grassy notes. It was the familiar perfume of psychotropic flowers. My mouth watered at its essence. The first draw was a perfect marriage of familiar comforts; my lips recognized a cigarette and rested on the filter tip with amenity, but with the draw came the intimate relief of a joint, spreading soothing warmth throughout my body. The inhale was made silky smooth by the cigarette filter, and to my surprise, no flavor or satiny mouthfeel was lost on account of the filter. On the contrary, the filter seemed to improve the taste and the texture of the smoke by grabbing at least some of the bitter char. And it should be noted that even though these look like ciggies, they burn like joints, so beware of resinous runs.

The onset of effects mirrored all of the initial, superficial comforts of a regular joint, easing on like a pair of pre-warmed wool socks on a snowy day. The high was lush, romantic, and sensual but manageably so. It was dreamy without being opaque and luxurious without being lazy. Of the four varieties of Pachecos Eco Firma Farms offers—Hammerhead, Stryders, Mazzies, and Keens—I sampled the Mazzies, which contain the 24% THC hybrid strain Hazy Girl. The packaging describes the contained high of the Mazzies as “chill,” but I think that’s a necessary oversimplification. This was a concertina of calculated effects that comforted and relaxed me while electrifying me creatively. The seemingly disparate sensations entwined so effortlessly that, even when hunched over my keyboard in an ill-lit cafe, knees cramped under the hard wooden table, I couldn't have been happier.

“As I so often do when I’m high as balls, I sketched myself into sublime bliss.”

Knowing what to expect for the second session, I made sure I had an engrossing project I could really pour myself into—and a comfortable place to plant my ass. I settled on the couch with my sketchbook and a plan to reimagine popular Saban cartoon characters from the ‘80s (She-Ra, Jem, Cheetara, etc.) as black or biracial. And as I so often do when I’m high as balls, I sketched myself into sublime bliss. 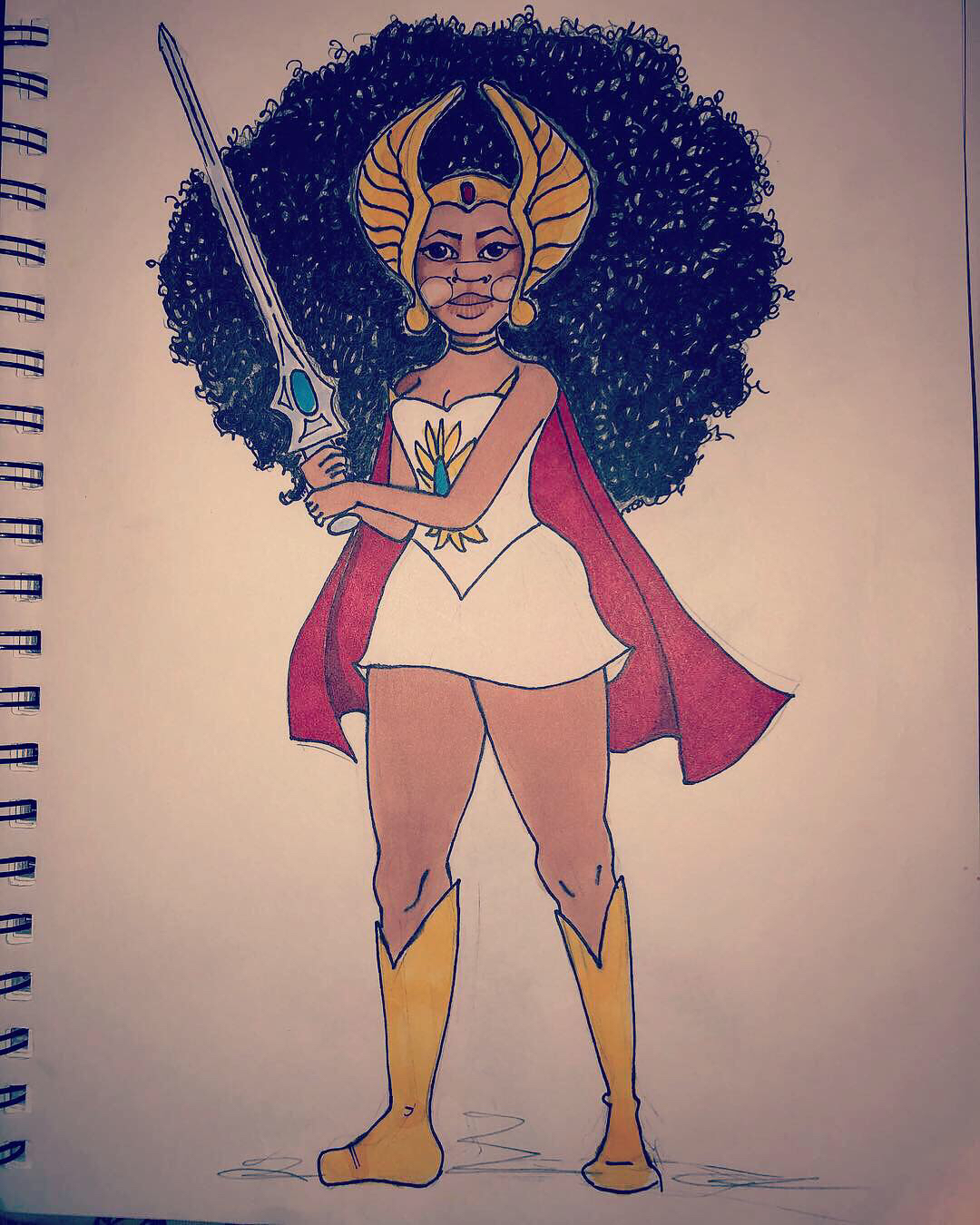 Pachecos’ most unexpected perk was a heightened awareness of my Spotify Discover playlist. I’m a super-serious mixtape diva, but when I’m lost in an intellectually demanding project like writing, a mixtape is white noise. When I was high on my Pachecos, however, I curated a whole monthly playlist while I was fine-tuning a personal essay and putting the finishing touches on She-Raisha’s afro. My mental multitasking capabilities were on a whole ‘nother level, which is either super chill or the opposite of chill, depending on your perspective. I’m an overachieving Libra with a thousand jobs, so for me, this was the apex of hella chill.

If you’re still skeptical of my resounding endorsement of these puppies, know that Pachecos are available in singles as well as packs of three or five. What’s more, their potency ranges from heavy-duty indica for seasoned smokers to high-CBD, low-THC strains more accommodating to light or therapeutic smokers. Mazzies Pachecos’ stunning similarity to my uncle’s More brand cigarettes is visual only. Indeed, it took only a few inhales to realize these weedarettes are pure cannabis joy.