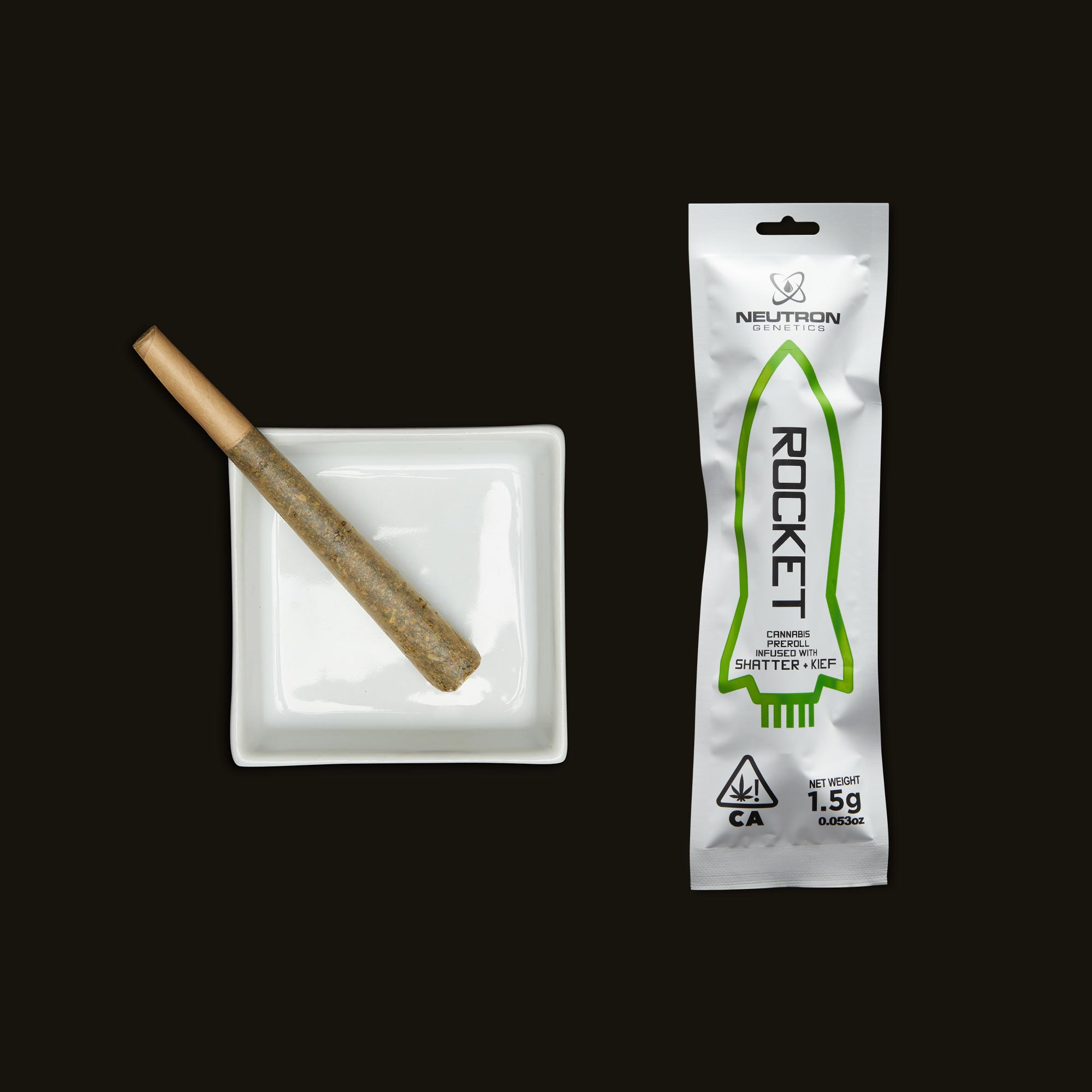 This shatter infused Indica pre-roll provides a balanced high perfect for diving into creative endeavors and avoiding any lingering anxieties. Expect chill vibes to take over as you begin to feel a oneness with whatever surrounds you. After this rocket lifts you off the rest of your day will consist mostly of floating on euphoric waves of utter bliss that eventually set you down into a relaxed and sleepy state. 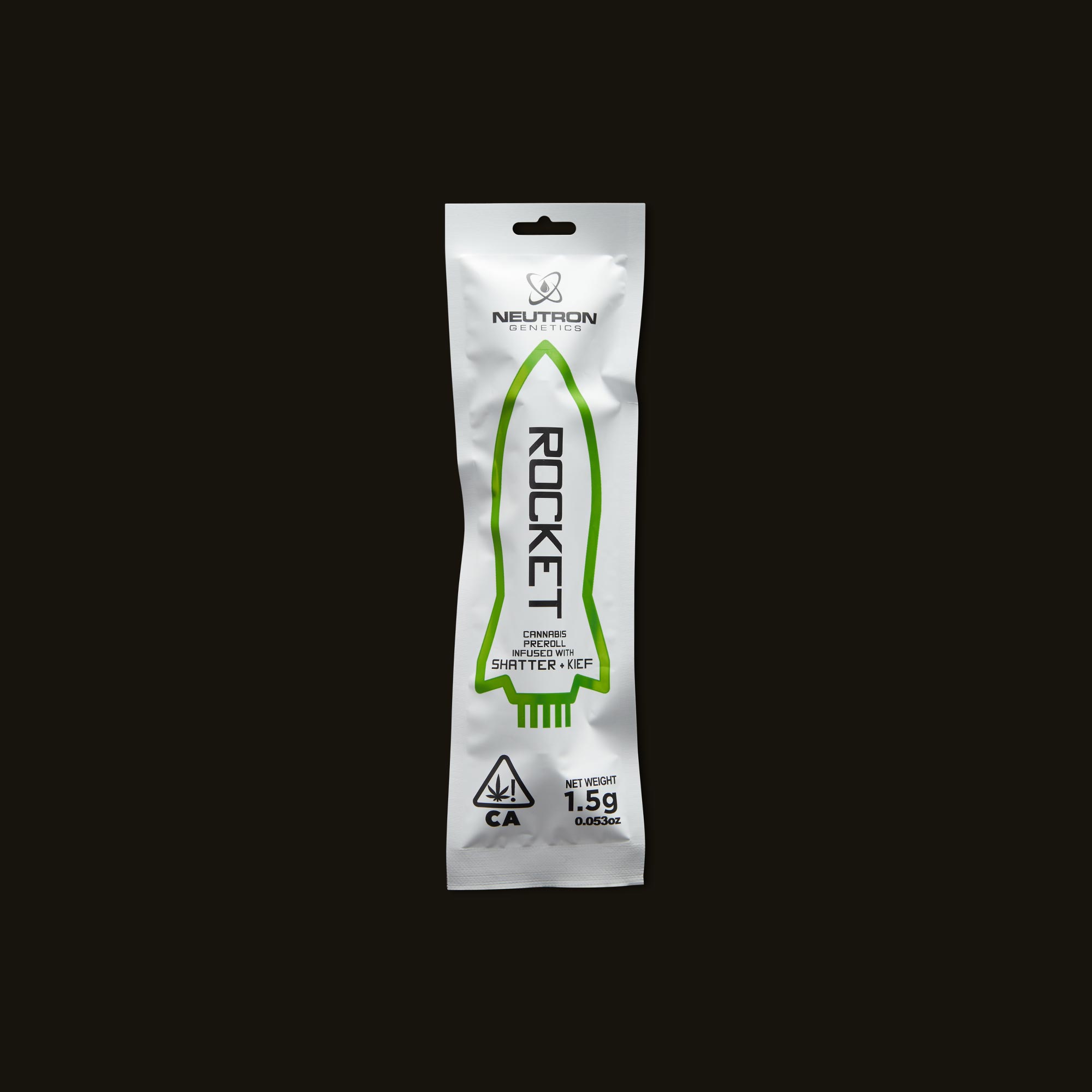 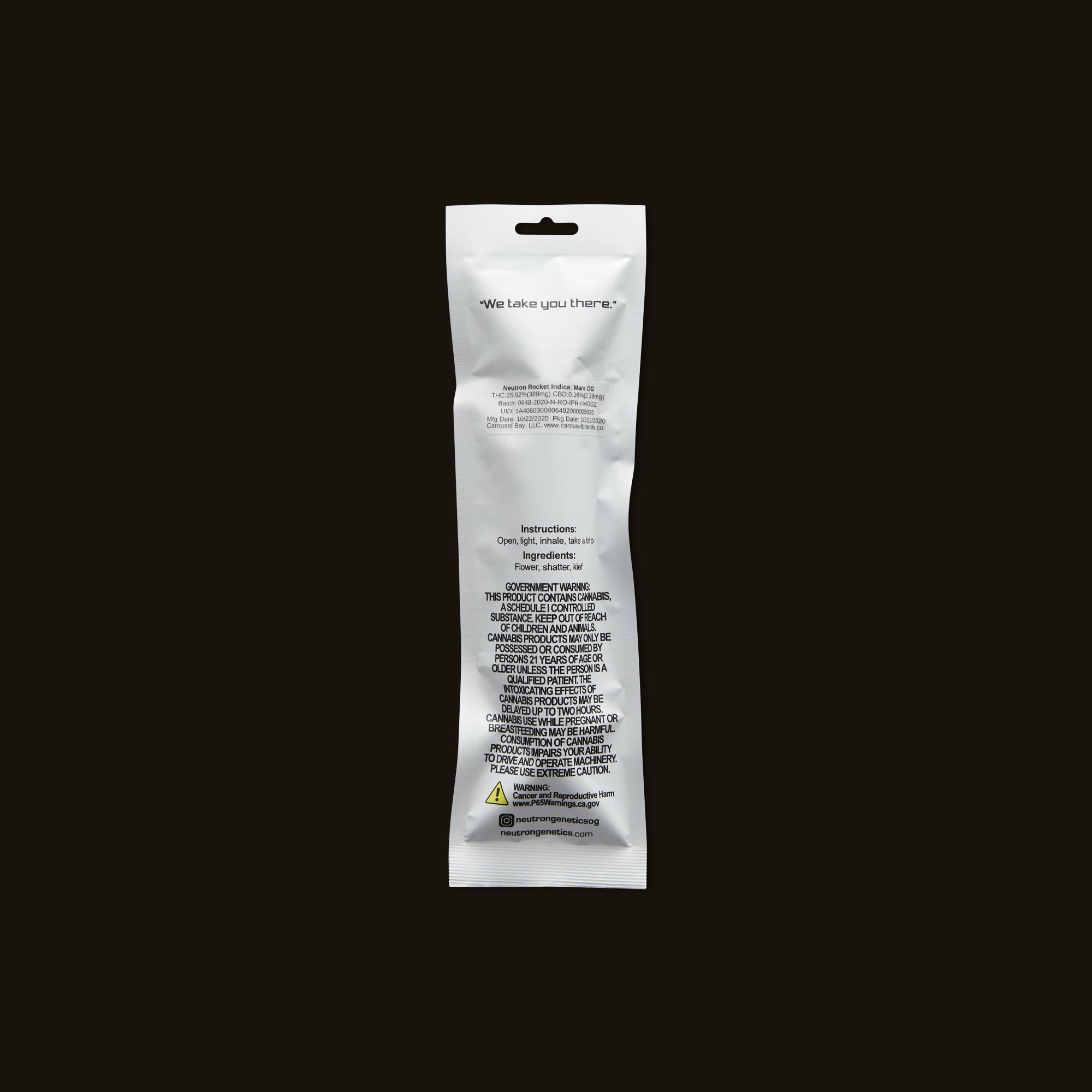 As our committee rates Rocket Infused Indica Shatter Pre-Roll, we capture their experience in real time through our ratings app and report everything back here.

A nice old fashioned and warm smoke, like what I imagine when I think of an old man in the 50’s puffing on a cigar.

Ride This Rocket To A Creative Space

All systems are go for this heavily infused pre-roll to get you higher than a kite.

IN REVIEW: Each of these 1.5g joints is packed with premium flower, kief and most importantly, nug-run shatter. Tasteless terpenes are also worked back in to give the potency a punch without disrupting the already present menagerie of flavors. Hints of fruit, diesel, and earth work together to ground you and wipe away any anxieties as you settle into a creative and balanced state. This is for more experienced smokers, so newbies beware. As the name implies, use this to blast off.

I was having a lazy Sunday. So lazy that I didn’t even want to roll my own joint. All I wanted to do was sit on the couch and play games on my phone, but my mind was nagging me about all the stuff I had to do. I wanted to chill my anxious and racing brain to match my body’s morning-cartoons vibe. So, I grabbed this giant pre-roll that’s sprinkled with extra goodies inside and looks like the prize you’d get in a Cracker Jack box.

This Rocket Infused Cannabis Pre-Roll has a neon rocket on the front, and the package design is similar to alien jerky you can buy on the way to Las Vegas. It also says that the 1.5g joint inside contains “Flower+Kief+Shatter.” The ingredients list on the back adds “distillate & flavorless terpenes,” which on top of the 22.2% THC and .04% CBD equals a pretty damn powerful little pre-roll. The instructions on the package say to “Open, light, inhale, and take a trip.” So I strapped in and got ready to see just how high this spaceship would take me.

“A nice old fashioned and warm smoke, like what I imagine when I think of an old man in the 50’s puffing on a cigar. ”

It had an instantly sweet smell, but not so strong as to feel unnatural. Despite how loud and eccentric the package looked, the smell was earthy, subtle, and pleasantly light. There was maybe the slightest hint of vanilla, something almost reminiscent of baking. I would’ve worn it as a perfume. The flavor also started out light, but after a few puffs I hit some of the distillate inside and it suddenly became harsher. Layers of different flavors started coming through, some fruity and some chemical.

There was almost a woodiness to the flavor, sort of like scotch. A nice old fashioned and warm smoke, like what I imagine when I think of an old man in the 50’s puffing on a cigar. The act of smoking itself became a relaxing treat, and I found myself savoring each moment of the experience. As it burned down, I could see the shatter inside melting along the edges of the paper to create a glistening halo around the flaming red cherry.

I suddenly felt like I was pulsing in tune with the world. Everything was vibrating and harmonizing, dancing together in the rhythm of my breath. There was a heartbeat in the sounds of passing traffic, birds in trees, and humming air conditioners.

I was feeling creative and was hit with divine inspiration to make a masterpiece. I imagined great plans for a new type of face mask that could help amplify your voice. I felt like Thomas Edison with an idea, and I excitedly went to sketch out my brilliant innovations for fashion and function in this brave new world.

I got so excited I pulled out my crafting arsenal. Glue gun, duct tape, wire, scissors, mannequin head. I got all set up to build the most sophisticated face mask the world has ever seen (that can be made with hot glue and duct tape). I was no longer in my couch-locked and lazy chill mode, but in a fun playful chill mode.

It made me feel cerebral in a creative way. I was thinking about all the new issues relating to daily life in a pandemic as a sort of challenge, some great puzzle that’s yet to be solved. The best way to solve a puzzle is to mull it over of course, so I decided to think about it while smoking the rest of the pre-roll. By the time I reached the end of the joint, in what seemed like an Alice in Wonderland style of stretched time, the shatter inside had made the whole thing thick and sticky. That matched the buttery syrup feeling I had flowing over me; everything felt sweet and smooth.

After numerous designs, I realized there was no way I’d create a functional mask with my glue gun and scraps. So I went downstairs and joined my roommates who were watching a documentary on psychedelics. I also suddenly realized I had a midnight deadline, and decided to try and navigate both the movie and my writing in a psychotropic work fest.

“I was feeling creative and was hit with divine inspiration to make a masterpiece.”

My high was helping me balance the show playing in the background, my roommates chatting, and my frantic writing of scripts for TikTok videos (yes, this is somehow a real paid job now, and one I can actually perform while pretty stoned). I wasn’t panicking as much as I usually do when I’m mere hours away from a deadline, though I was still slightly anxious that I should be doing more.

I felt floaty and loose overall. It was euphoric, but it also let me focus on what I needed to do by blurring out everything else. This joint helped me follow the funny flow of ideas that raced through my mind like white rabbits, while keeping me calm enough to write them down before they hopped away.

I got my creative work finished and sent in just under the deadline, and I did it all without my heart racing from nervous anxiety. I sat back and admired my relaxed confidence, then celebrated with snacks. This pre-roll was a delight, and I made a note to buy it again. Often, a fanciful treat promises more fun on the package than it has in the box, but this Rocket Infused Pre-Roll truly delivered with a perfect lift off.

Be the first to review Rocket Infused Indica Shatter Pre-Roll from Neutron Genetics and help others find their high.