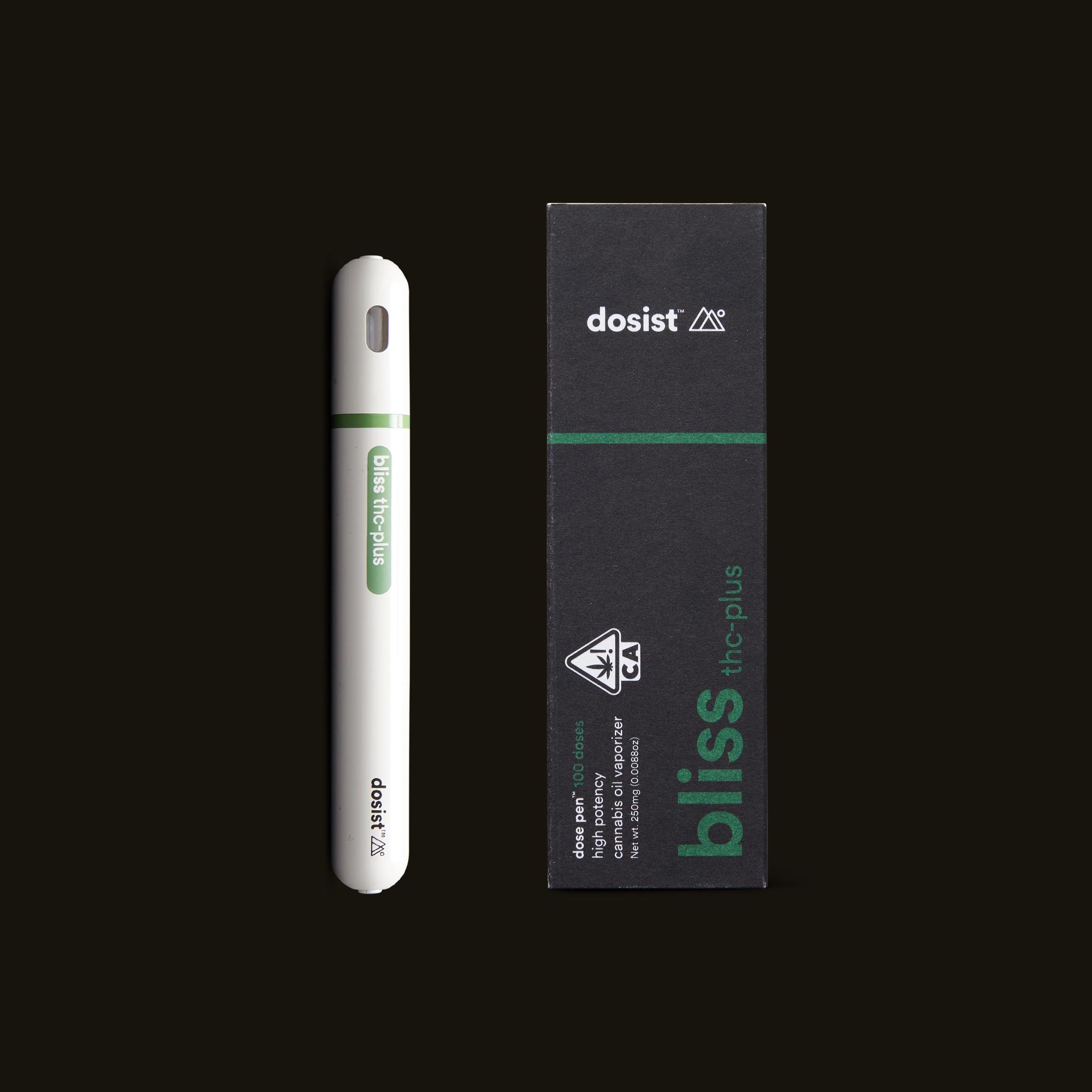 Ranked 12 of 331 in Vape Pens for feeling Euphoric. 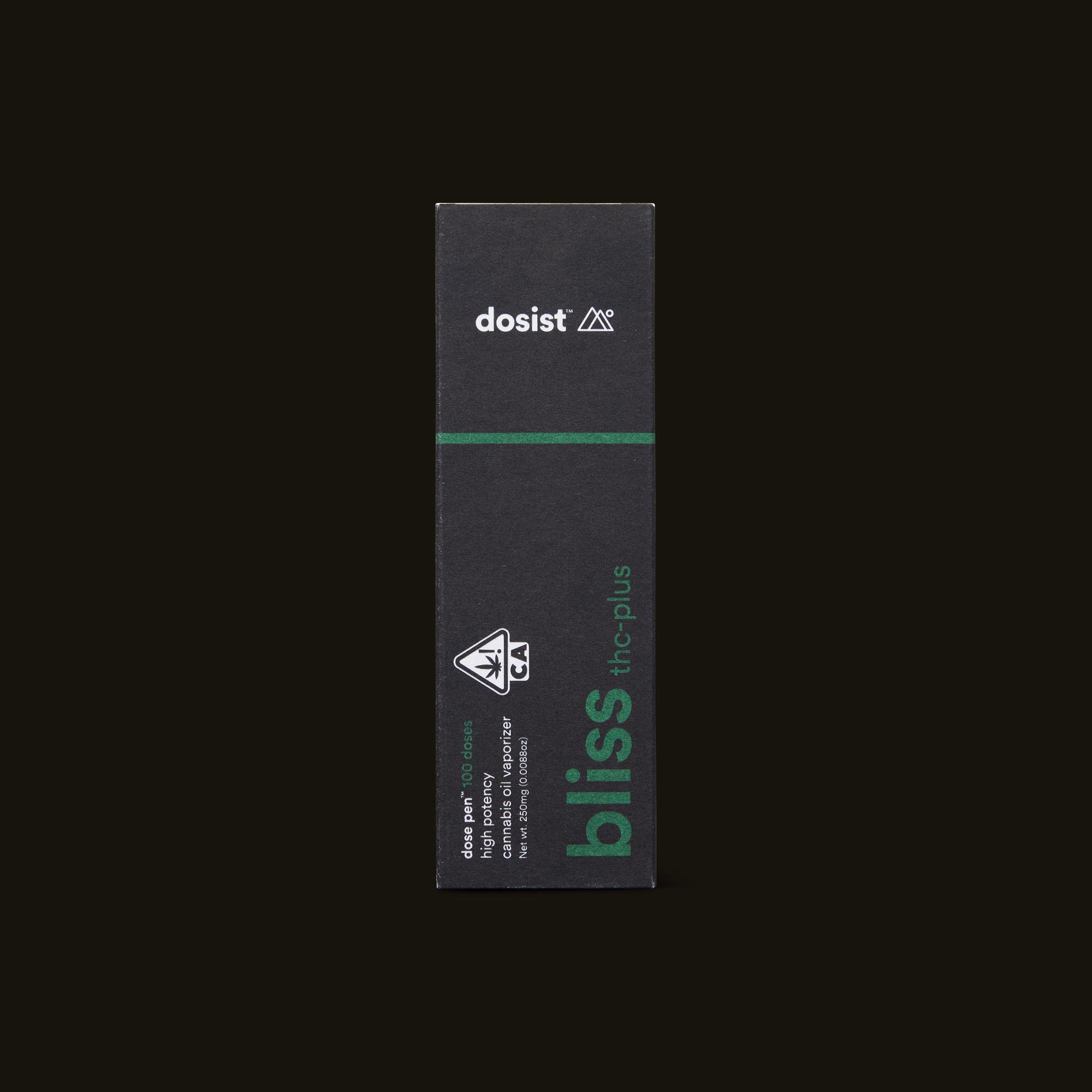 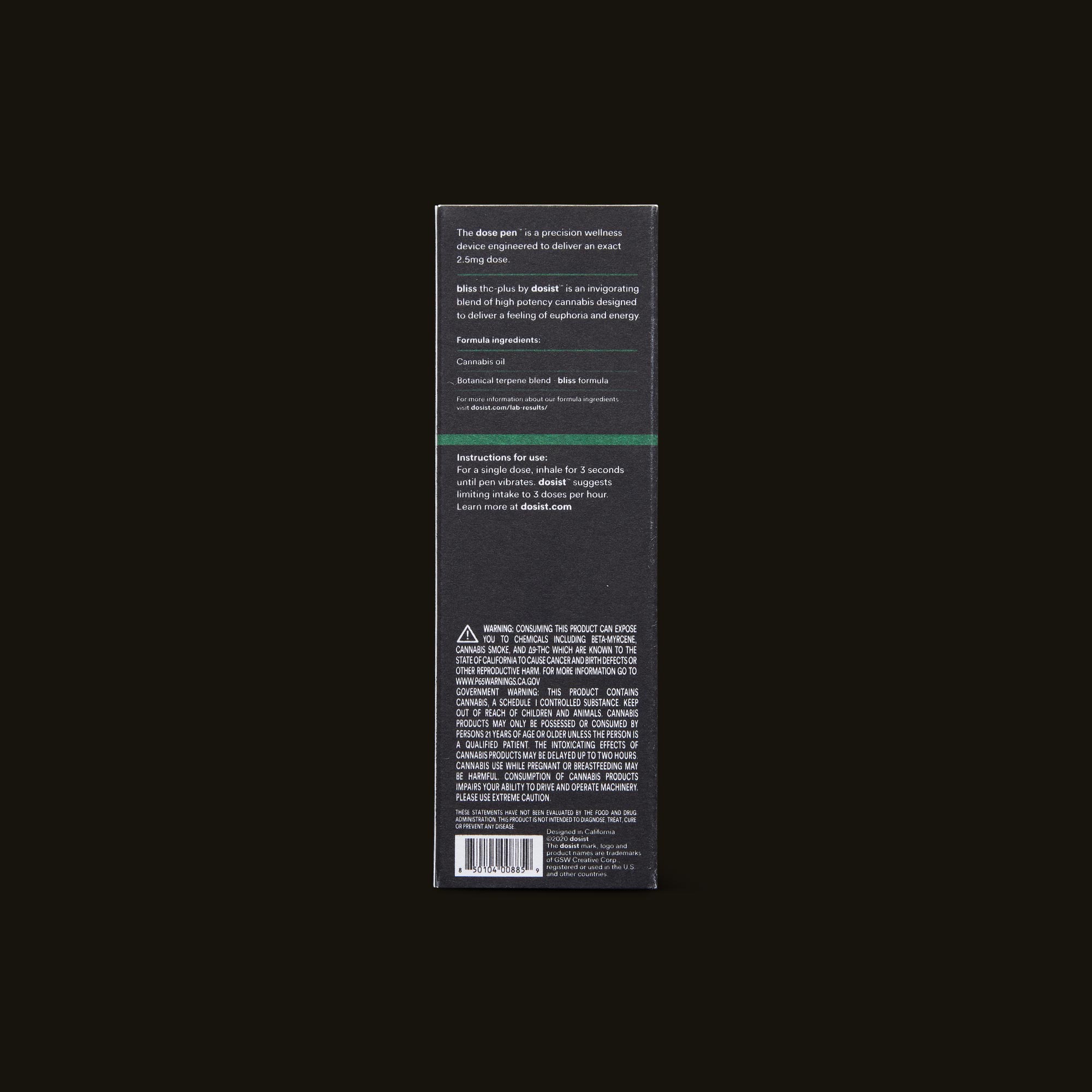 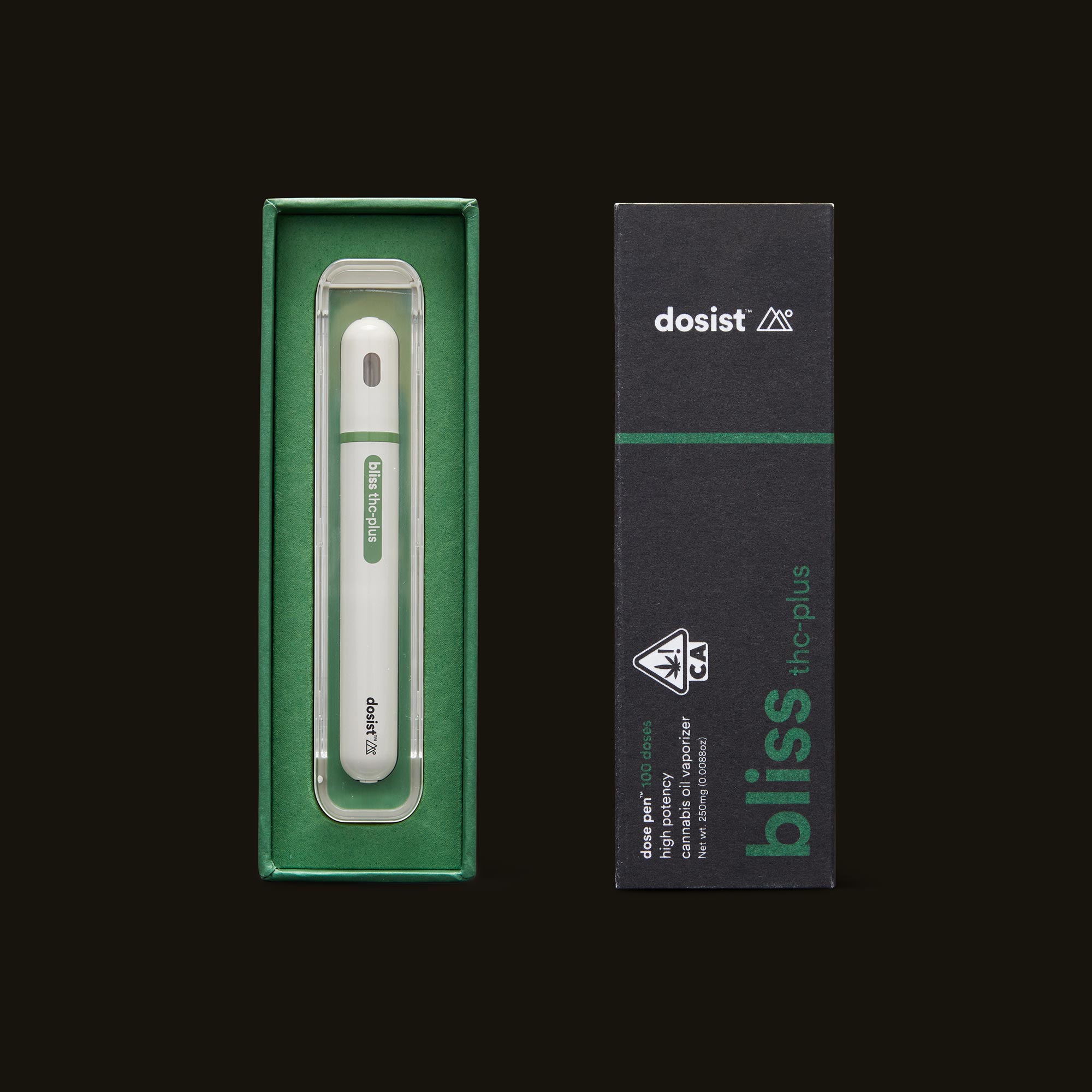 As our committee rates bliss thc-plus dose pen, we capture their experience in real time through our ratings app and report everything back here.

Ranked 12 of 331 in Vape Pens for feeling Euphoric.

Nice subtle boost of energy that has me going through my To-Do list. Feeling positive and joyful.

Control your creativity and elevate your process with this powerful and precise pen from dosist.

IN REVIEW: This all-in-one vape contains pure cannabis oil and a terpene profile formulated to elicit a sense of bliss. While the product is quite potent, each metered, three-second pull provides just 2.5mg of oil, giving you 100 chances to boost your energy, creativity, and overall outlook. Expect to feel truly uplifted. The doseable aspect of this pen makes it a great place to start for those new to cannabis, and as with all disposable pens, please recycle responsibly!

The bliss thc-plus dose pen by dosist is a futuristic-looking vaporizer that offers a precise 2.5mg dose of THC with every pull. After about three seconds, a small vibration lets you know that you’ve inhaled the allotted dose, and the oil is no longer released. It made me think of those Smartender machines you see on booze bottles in Las Vegas. The ones that give you precise pours, and are the bane of any college student on a budget who’s just looking to be topped off after losing a chunk of their tuition money at the blackjack tables. But for the cannabis market, this dosing governor can be the difference between a chill experience and an anxiety-ridden nightmare.

The bliss pen has the added benefit of luring in those tentative about medicinal marijuana, with the promise of a precise and measured dose. At 82% THC, you may be glad this vape pen is holding back on the reins a bit. The taste is a refreshing mix of pine and mint, with just a hint of diesel. It’s a disposable vaporizer that’s sleek to the touch and gives off a sterile and medical vibe. Make no mistake about it though, this is a pen that delivers on its promises by giving an even-keeled sense of bliss with every pull.

It’s a short but potent buzz that makes for repeat vaping. It almost conditioned me to a point where I was sort of enjoying the vibrational shut-off mechanism. In one way it made me feel like a hamster, but in another, I knew what I was in for each time. While this seems clinical or restricting for some, I assure you that the high itself had the opposite effect. The bliss thc-plus dose pen delivers sustained euphoria that had me craving small-scale adventure right from the outset.

I felt like this could be the perfect little companion for a midday hike, so I decided to take a long trek into the nearby Pt. Mugu State Park. The park had recently opened back up, and after an initial onslaught of hikers, it’s died down to where it’s almost deserted again. A great occasion to get connected with nature as I puffed my way down previously undiscovered paths. I had this constant urge to veer off track and explore, and this was fertile territory for all of that. It was a liberating feeling.

After about a mile, I came across a small ranger station that was closed. Two rocking chairs sat on a wooden deck outside its entrance. They faced a Native American straw hut that had been reconstructed for educational purposes. Behind it was an expansive view of the Santa Monica Mountains and Boney Peak. When I scanned my immediate periphery and saw no human in sight, I eagerly took a seat on the rocker and helped myself to a few more pulls of bliss. It was the stuff of “Wish You Were Here” cards.

“As a stress reliever it gets high marks, but where it really shines is its ability to help you connect (or reconnect) with the natural world.”

I took close stock of my surroundings and happily melted into them. There were at least a dozen rabbits zig-zagging amongst a thicket of bushes, squirrels giving chase to other squirrels, hawks circling in the distance—all things I hardly paid attention to in regular, non-high life, but all things that were then demanding my full attention. It was a transitory moment of acceptance and losing oneself, and it felt almost therapeutic.

Walking back home as the sun set was a well-timed send-off for this euphoric and gratitude-inducing high. As a stress reliever it gets high marks, but where it really shines is its ability to help you connect (or reconnect) with the natural world.

This vaporizer pen is a disposable that comes with around 100 individual doses. It’s easy on the throat, flavorful, and looks like a pocket light saber—something Luke Skywalker may have walked around with while he was attending community Jedi school on Tatooine.

The three-second rule it employs is a cute bell, but for those looking for precise highs and a smooth ride, it’s actually quite ingenious. For the rest of you who prefer to just throw caution to the wind and inhale to the beat of your own inner vibration, just enjoy the lip music and stick around because you will get what it is you seek. This is nothing less than a compact wonder for calmness and connectivity.

Be the first to review bliss thc-plus dose pen from dosist and help others find their high.