Ranked 27 of 317 in Vape Pens for feeling Euphoric. 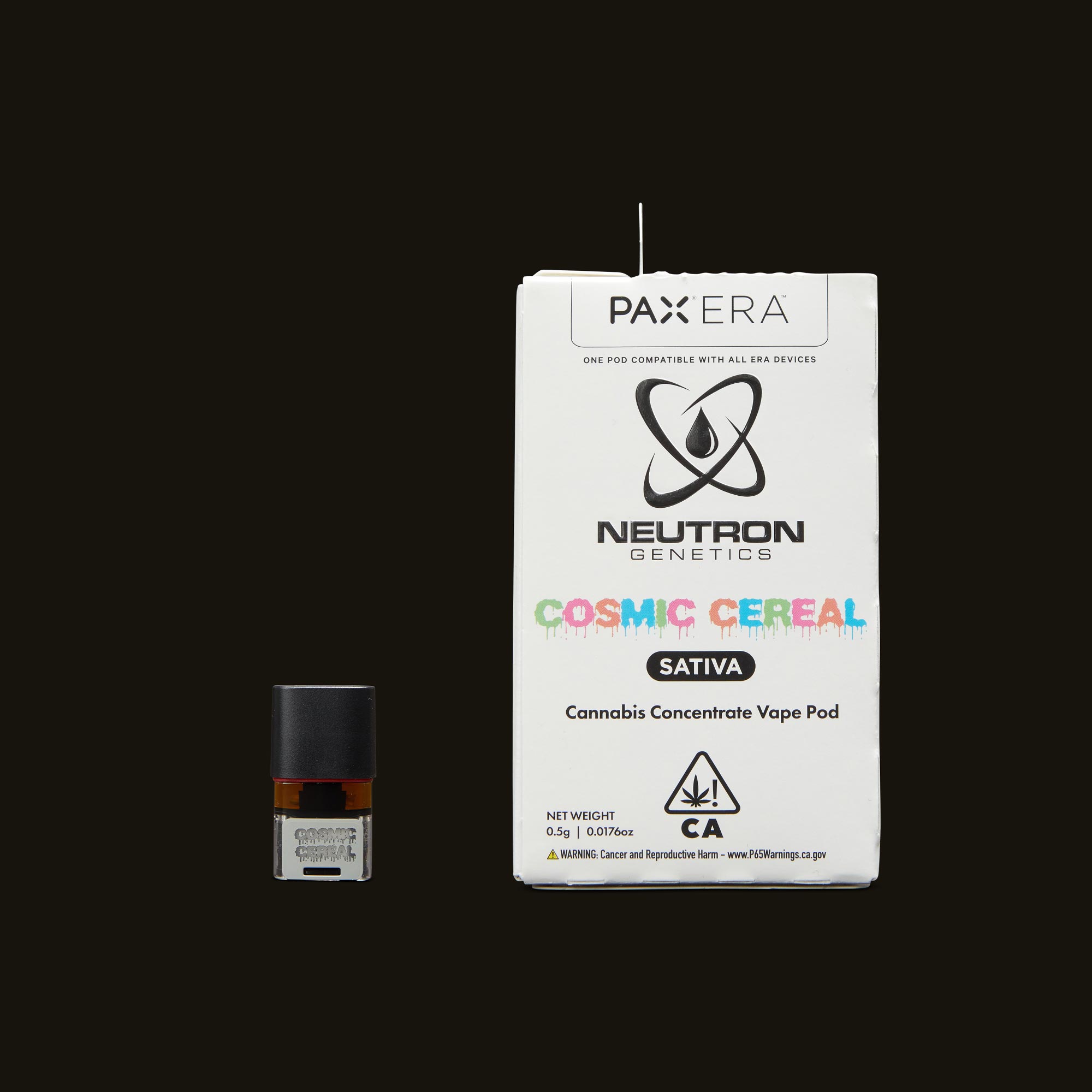 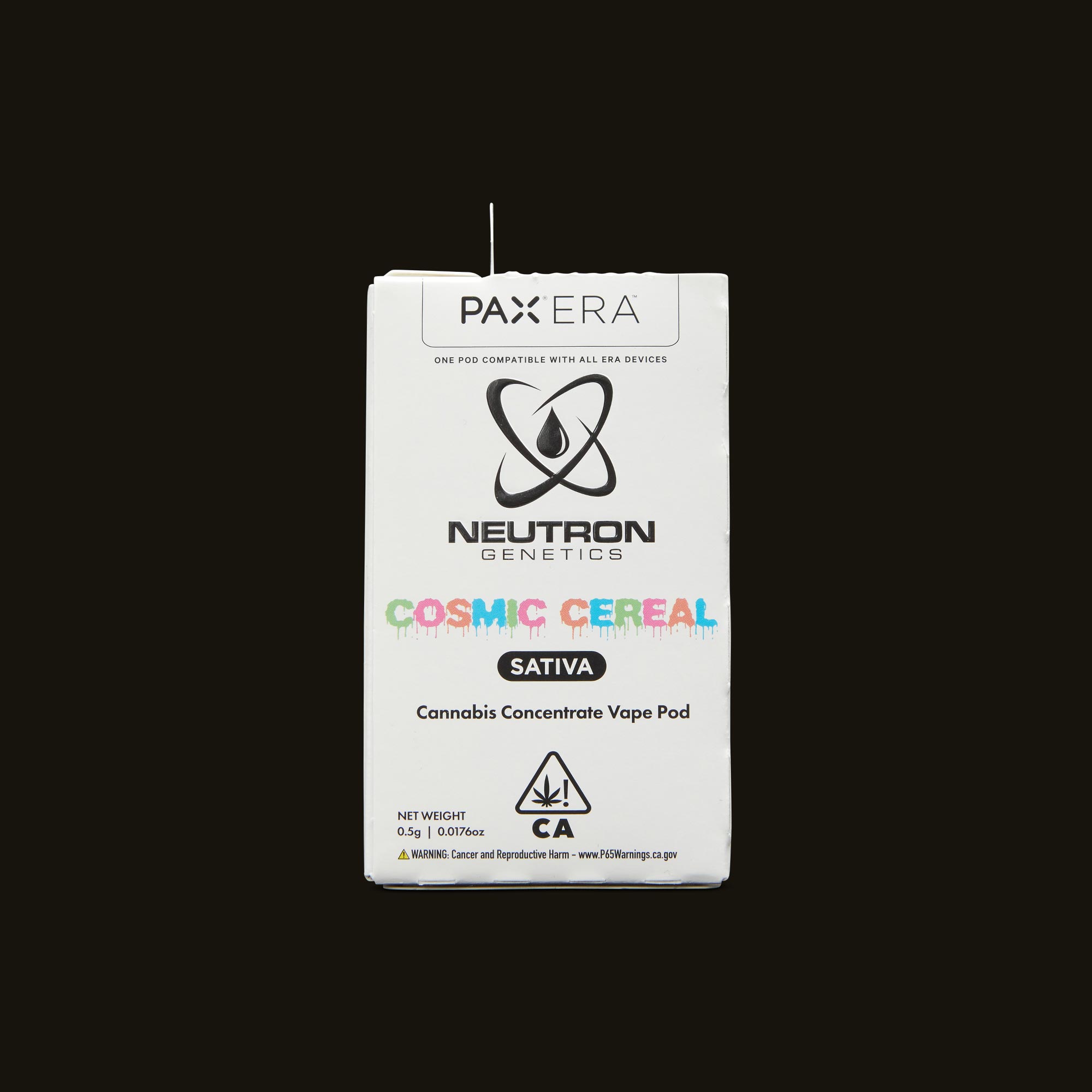 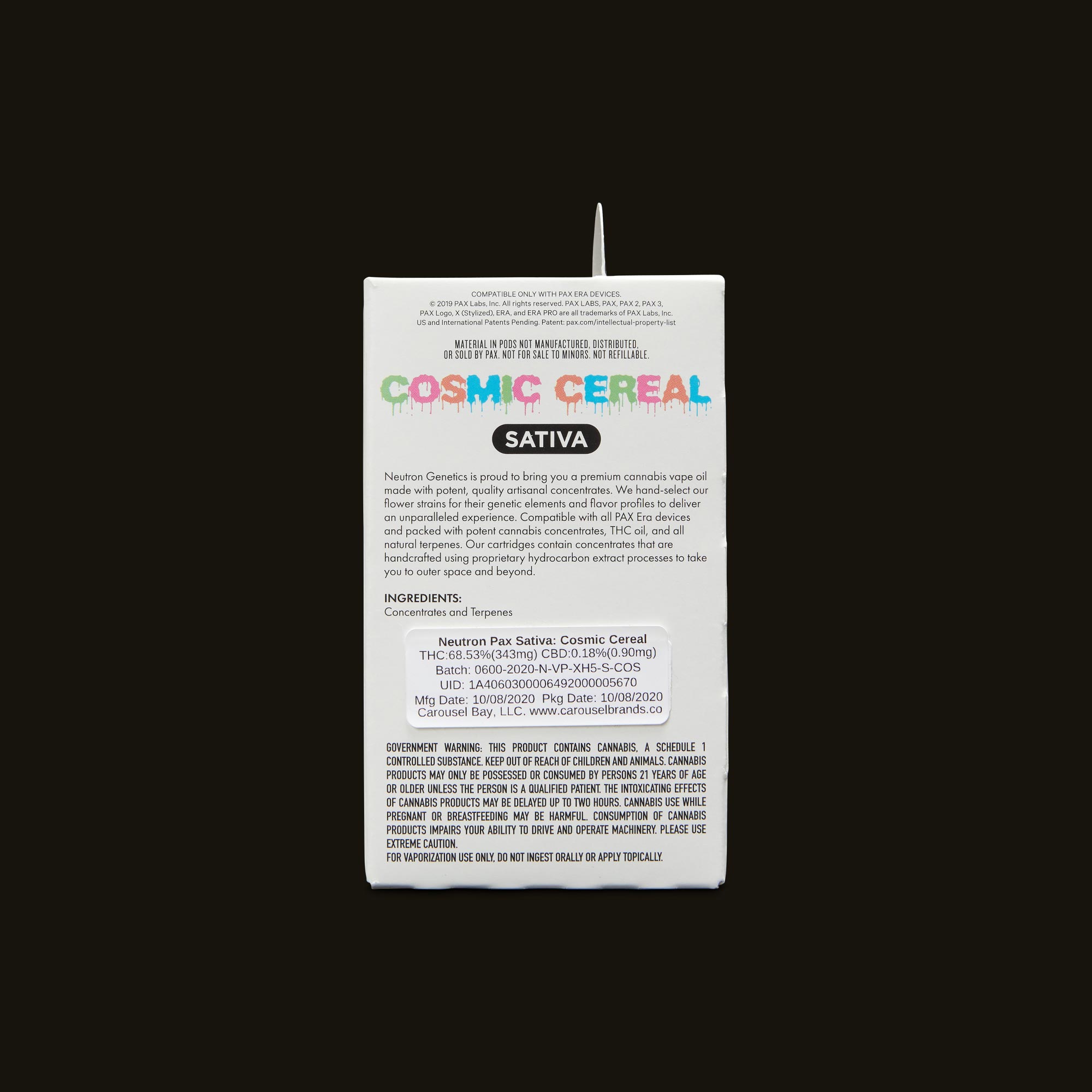 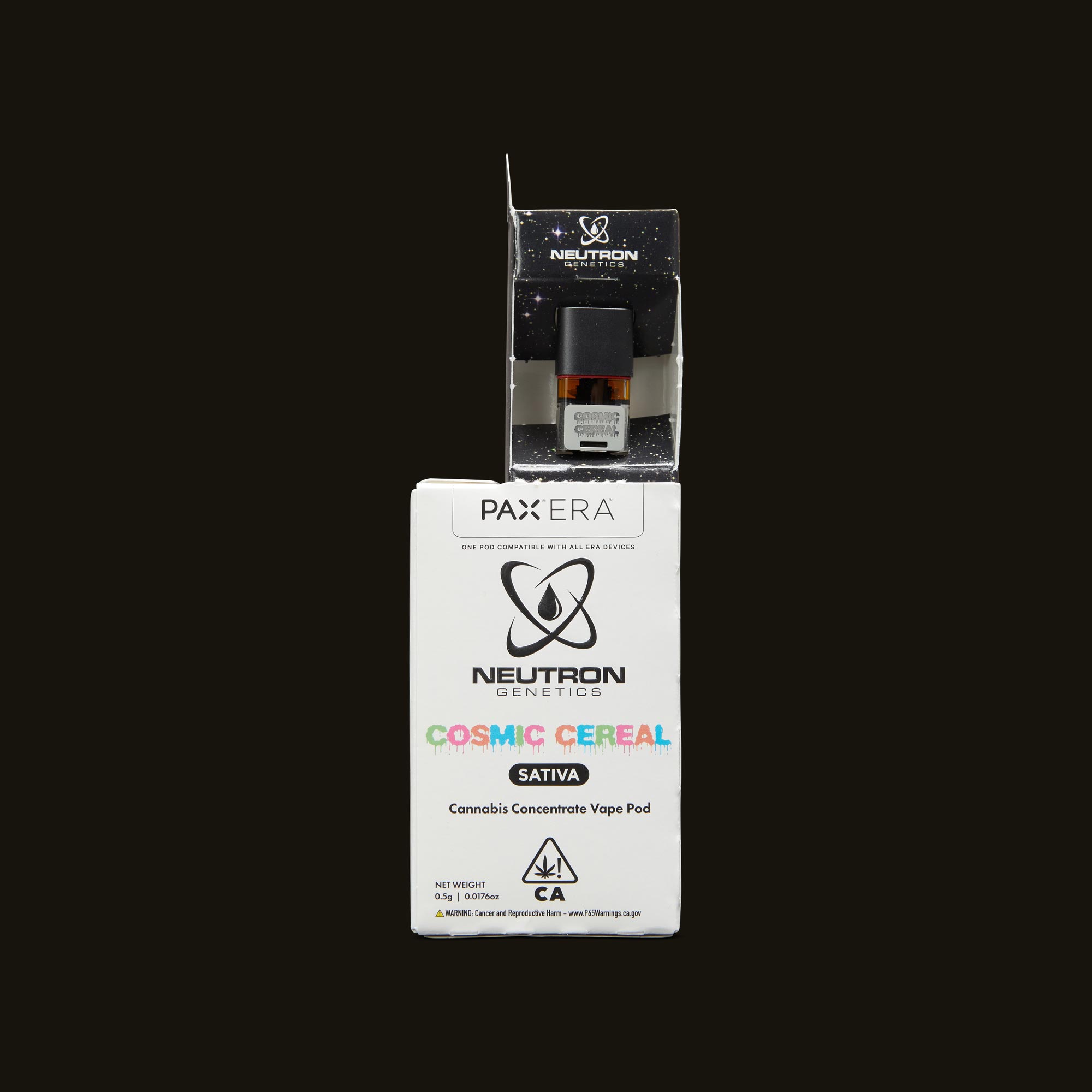 As our committee rates Cosmic Cereal PAX Era Pod, we capture their experience in real time through our ratings app and report everything back here.

Ranked 27 of 317 in Vape Pens for feeling Euphoric.

After a few minutes, the high comes on strong. I feel tingles all over my skin and my mood has instantly improved. This would be great for a social event.

Neutron Genetics’ Pax Era vape pod will lead you through a euphoric wormhole of heady delights.

IN REVIEW: This half gram vape pod offers a sweet burst of euphoria with 68.53% THC & a hint of CBD. It’s a sativa hybrid that's compatible with the PAX Era, meaning you can take this pick-me-up almost anywhere. Neutron Genetics is a veteran in the concentrate community, and they specialize in potent products that leave a lasting impression. Cosmic Cereal is the space child of Granddaddy Purple and Tahoe Alien, and beware, the head rush you'll get from this vape is far stronger than that of the sugar rushes you sought from cereal as a kid.

The Cosmic Cereal Pax Pod by Neutron Genetics helped me get my day started on the right foot. It was reminiscent of that sugar-filled bowl of Fruit Loops we enjoyed as youngsters (or still enjoy...shhh). Its big flavor and smooth hits made this PAX Pod ripe for repeated vaping. This was just the sort of fun high I was looking for, and having organized my taxes all morning, I was properly headspun, and maybe even a bit down in the dumps. I was almost daring this Cosmic Cereal to turn my fortunes around, and to my utter surprise, that’s exactly what it did.

“By elevating the breakfast of our youths to euphoric heights, you get a sense of whimsy and lightheartedness. ”

At 68.53% THC, this half gram Pax Era Pod turned out to be quite potent. I cannot ever recall my Fruity Pebbles distorting my perceived reality in such a way, but then again, the General Mills company knew nothing about extracting THC. How things can change in a mere generation or two. By elevating the breakfast of our youths to euphoric heights, you get a sense of whimsy and lightheartedness. That is until the eighth or ninth vape, and then what you get is a taste of traveling at mach speed.

This focusing high crept up like a rollercoaster ride, ticking up to its zenith before unleashing itself, and I decided to take my excess of energy on a six-mile run. Somewhere during that run, I was awash with the full brunt of this energetic sativa, and all there was to be had at that moment was a sense of unencumbered joy. It was a far cry from the brooding and burdened version of myself from early that morning. Sometimes I like to crack open a beer or two after a long Sunday run, but not that day. Instead, I had a few more vapes of Cosmic Cereal, which proved intoxicating enough to make it a worthy alcohol substitute. It had the added benefit of not making me feel groggy later in the day, while also proving itself as an effective analgesic. It reminded me of those sports drinks that are good for both pre-and post-workout.

Neutron Genetic’s Cosmic Cereal showcases the finer points of its lineage. It has both the cerebral and invigorating nature of Granddaddy Purple, and the potent and stress-reducing ways of Tahoe Alien. To add credence to the whole space theme, this high takes on an ethereal and otherworldly quality towards the tail end. When I returned from my run, it truly felt as though I’d floated the entire way.

“It's vaporized space food for terrestrial astronauts looking for some escape from the daily grind.”

The Cosmic Cereal PAX Pod by Neutron Genetics is vaporized space food for terrestrial astronauts looking for some escape from the daily grind. It’s as if Fruit Loops, Tang, and the almighty marijuana got together in one of those astronaut training modules and established a pact to cure the ills of the world. While this PAX Era vape pod served me well during the day, I revisited it at night and was further rewarded with a nice wave of euphoria that helped me unwind and ultimately fall asleep.

It’s a good multi-use vape that works well to instill a sense of joy and wonder. The fact that it’s compatible with the Pax Era makes this a stealthy choice as well. As a strong Sativa, this provides a sudden burst of energy that eventually winds its way down to a relaxing lazy river. If working out isn’t your thing, this should help you, at the very least, knock a few items off your to-do list. I would also take this to social gatherings or outdoor settings where the vibrancy of this high could make for a fun time. Though if you’re puffing on this while hanging out with your pals, be sure to practice a bit of restraint, as this Cosmic Cereal can take you to frontiers unknown.

Be the first to review Cosmic Cereal PAX Era Pod from Neutron Genetics and help others find their high.